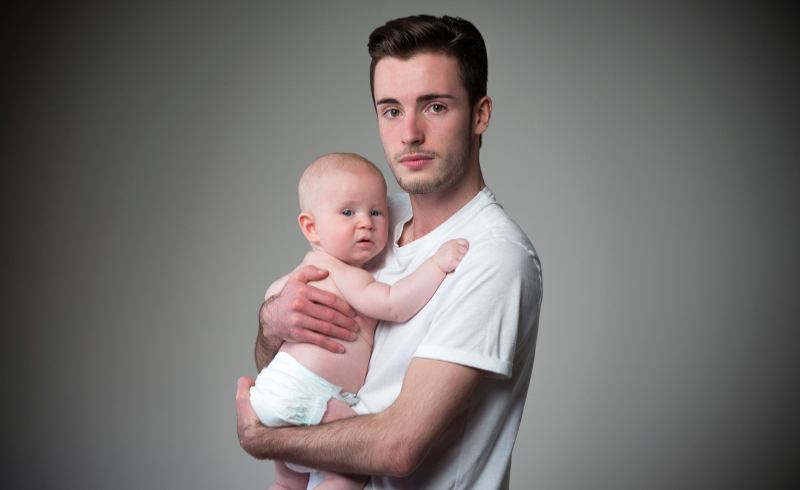 Dr. Andrew Smiler looks at a day in the life of a teen father: confusion, sadness, and love.

Or maybe it’s some other inglorious job, like keeping the grounds, washing dishes, or janitorial work. Whatever it is, it’s a job and you’re glad to have it.

But that was then. It’s all different now, since you became a dad. Your Love, your Sammi texted you, said the two of you had to talk. It was important, she said. Important doesn’t even begin to describe it. She said “You’re going to be a daddy.”

You remember everything about that conversation. It was April 7. You’d just turned 18 and would graduate high school a few weeks later. Sammi was wearing this Mickey Mouse t-shirt you’d gotten her for her birthday because you knew she was a huge Disney fan and you used to talk about how cool it would be to go to Disney together. You’d been together for 10 months, gone to homecoming and prom together. The two of you were deeply in love and while you both knew the odds were against it, you’d talked about growing old together.

The statistics are harsh. Approximately 180,000 teen boys become fathers every year in the US. Most are 18 or 19 when the baby is born, but some are younger than that.

Statistically, there are more Black and Latino fathers than there should be. Although about 10 to 15% of teens fall into each of those demographic categories, almost 30% of teen fathers are Black and 20% are Latino. Almost all of the rest, approximately 48%, are White. When we focus on boys of color – and that’s usually how teen pregnancy is described – we miss half of teen fathers.

As with many other “societal” problems, the boys who become teen fathers are more likely to have been raised in or near poverty by a single parent (usually mom) and their parents probably had their first child as teens. Teen fathers are also more likely than other boys to be described as delinquent, suffer from their own mental health problem, and often don’t do well in school.

That was a year ago. Now, it’s work, work, work, send the money, and do anything you can to stay on her mother’s good side. Your mom threw you out. Said if you were old enough to be a dad then you were too old to live in her house. And she didn’t want you to rub off on your little brother.

Your Sammi…well, you still love her. But it’s not the same. For one thing, the two of you can barely spend any time together. She’s home with the baby all day and under a ton of stress. She’s doing the best she can, but you know it’s hard. Her mom’s there, but for all the help she provides, grandma never stops reminding Sammi how disappointed she is and that she’ll never amount to anything. Even though Sammi could take evening classes to get her cosmetology license and start doing people’s hair, grandma won’t watch the kid or let you in the house when Sammi isn’t there.

Grandma barely speaks to you. When she does, she tells you to make sure you keep your job and keep sending the money. Or remind you how you ruined her daughter’s life.

When the two of you are together, you care for the baby as best you can. Both of them, really. You listen to Sammi’s complaints and try to be there for her, and you play with the kid as much as you can. Even feed the baby and change her diapers, although you’re sure some of the guys would give you crap for doing that.

The average American thinks that when a teen girl gets pregnant by a teen boy, it’s the result of some random hookup. They’ll tell you some guy probably got her drunk and took advantage of her, or that he probably lied to her, promising her the moon, in order to get into her pants. Then took off. Never gave her his name, or maybe lied about his name. That he’s just a dog who wanted to get laid and didn’t care about her at all.

Most teen couples aren’t trying to have kids. Your dad told you to always keep your dick covered, but you didn’t always have money to buy condoms and the only pharmacy in the neighborhood kept them behind the counter, so you had to ask. Her family didn’t approve of birth control, so no pill or implant for her. Because condoms are highly effective at preventing pregnancy (and disease), and knowing how hard it is for many teens to get access to or buy birth control, the American Academy of Pediatrics recently recommended that condoms be made available at little or no cost to teens who need them.

But the average American is right about some things. The typical boy who becomes a teen father is very lucky to find permanent, full-time employment. The economy is pretty bad, and even worse for young men with a high school diploma, if that. Most teen dads are unable to find full time, steady jobs.

The future? Who knows. The two of you used to talk about getting an apartment together and raising the kid, but you haven’t talked about that for months. When you say “I love you,” it doesn’t feel the same. You don’t really have fun together, it’s all stress. You still remember that smile, but you have no idea the last time you saw it.

For more on the lives of teen fathers, please read: Teen Fathers: Trying and Barely Hanging On.

Author’s note: This story is based on the averages for teen fathers. The only way in which this story deviates from those average is in employment: most teen fathers are unable to find full time jobs.

If you thought that was good—there’s plenty more where that came from. We put out a “Best Of” newsletter once a day. Sign up here.

“Most teen couples aren’t trying to have kids. Your dad told you to always keep your dick covered, but you didn’t always have money to buy condoms and the only pharmacy in the neighborhood kept them behind the counter, so you had to ask. Her family didn’t approve of birth control, so no pill or implant for her. Because condoms are highly effective at preventing pregnancy (and disease), and knowing how hard it is for many teens to get access to or buy birth control, the American Academy of Pediatrics recently recommended that condoms be made available at little or… Read more »

“Unload the truck, unload the truck. Day after day after day, truck after truck after truck. 40 hours a week. Medical benefits? Yeah, right. But you’ve been here for 6 months now, so you’ve at least got a few sick and vacation days. Or maybe it’s some other inglorious job, like keeping the grounds, washing dishes, or janitorial work. Whatever it is, it’s a job and you’re glad to have it” Sounds like “father’s in general” and not just teen dad’s. Teens,welcome to the grown up world. The difference for man though is that you’ll find grown men with degrees… Read more »

FacebookTweetPinEmailShares56
wpDiscuz
2
0
Would love your thoughts, please comment.x
()
x
| Reply
Share this ArticleLike this article? Email it to a friend!
Email sent!