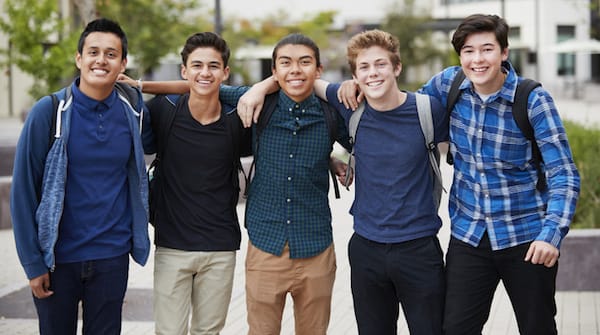 Unless you think raking forests will stop wildfires, you’re not going to argue with science, right?

So when the American Psychological Association (APA), which has been around for nearly 130 years, issues its first-ever “Guidelines for Psychological Practice With Boys and Men,” it’s no hoax. In case you missed them, the new protocols were prompted by the toxic toll that “traditional” masculinity takes on our emotional, cognitive and physical well-being, especially among boys.

The APA’s assessment should give us all pause: Boys and men demonstrate “disproportionate rates” of cardiovascular disease and other ills; violence, bullying and other public-health concerns; and a host of quality-of-life issues.

It was harder to miss the firestorm that followed People for the Ethical Treatment of Animals’ (PETA) post in response to the APA guidelines. The video shows a bunch of guys bumping and grinding with carrots, zucchini and bananas in place of their privates, and that should give us all pause, too.

First, though, full disclosure: Writing for PETA is my day job, and I’ve said here before that if you want to man up, go vegan—it saves animals’ lives, is a boon to your health and helps clean up environment—but even if I didn’t and hadn’t, you can’t argue with science.

Eating animals has to be at the top of any toxicity list—our meat lust doesn’t just kill billions of chickens, pigs, cows and turkeys every year, it kills us as well. Cardiovascular disease is the country’s leading cause of death, and the rate is rising, but eating meat also increases the risk of strokes, obesity, diabetes, colorectal cancer and Alzheimer’s disease.

If that isn’t reason enough for any man (or woman) to swear off meat, here’s another: Vegans have more fun.

You don’t have to be a registered dietitian to know that meat is loaded with cholesterol that clogs our arteries—all of them. That’s why PETA’s video ends with this undisputedly genuine advice: “Increase your sexual stamina: Go vegan.”

But don’t take my word for it. A diet high in fiber (i.e., fruits, vegetables and whole grains) helps scrub those arteries clean and gets the blood flowing … everywhere. In that same vein, fruits and vegetables, especially tomatoes, are loaded with sperm-friendly lycopene. What about meat and dairy products? Those are lipophilic foods and can negatively impact sperm quality.

The Danes answered the stamina question when they put a group of men on stationary bikes and had them pedal until their muscles quit. Those on a high-meat diet lasted all of 57 minutes, while strict vegetarians were in the saddle for 167.

No one will argue that we aren’t plagued by violence and bullying, and the APA was right in tying both to the toxicity of traditional masculinity: All you have to do is read a newspaper or turn on the TV to be reminded that too many men have a perverse need to “prove” themselves.

But those twin afflictions aren’t limited to a classroom, nightclub or ball field. Every time a baboon family is slaughtered, a tormented bull is stabbed through the heart, a deer is gunned down and gutted or a fish is yanked out of the water, a bully wins.

What does that say about our toxic masculinity? It says we need to reexamine our relationship to all others, including animals.

It will do wonders for everyone’s quality of life.

Facebook196TweetPinEmailShares196
wpDiscuz
0
0
Would love your thoughts, please comment.x
()
x
| Reply
Share this ArticleLike this article? Email it to a friend!
Email sent!