Get Daily Email
Join/Login CLOSE
Home / Ethics & Values / What Is the ‘Zero Gravity’ That People Experience in the Vomit Comet or Space Flight? 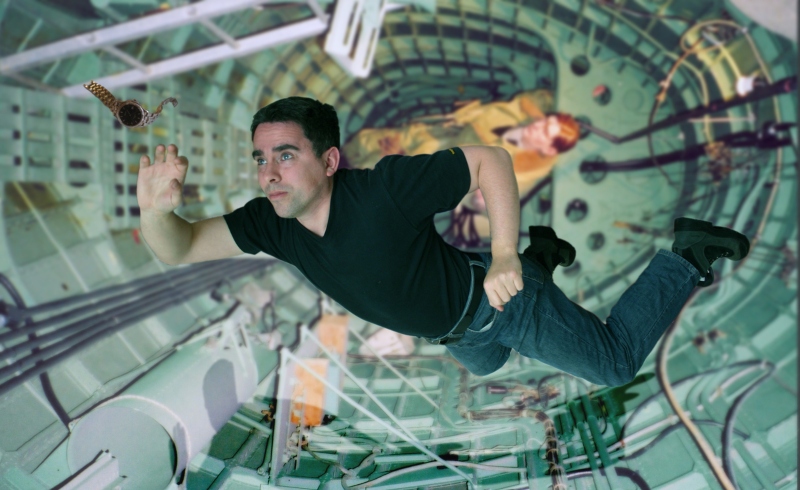 Curious Kids is a series for children of all ages. If you have a question you’d like an expert to answer, send it to [email protected].

In the zero-gravity airplanes or vomit comet, why does stuff behave like there is no gravity when it is just falling? – Austin B., 11, Scranton, Pennsylvania

I have flown many times in zero-gravity airplane flights. Each time I still enjoy the feeling of floating free, the ability to fly across the cabin from just one gentle push on the wall, just like astronauts in the International Space Station, and the novelty of rotating your body in whatever direction you choose. The feeling is like the brief sensation on some roller coasters or off of a diving board, but for close to half a minute and without the air rushing past you – it’s fun!

People feeling weightlessness without being in spaceflight might seem like a contradiction. But it is possible, and people frequently choose to do this for recreation or for research in an airplane that is flying in the atmosphere, not out in space.

I am a researcher in aerospace engineering and am interested in how to control and use liquids and gases in spaceflight. Examples are liquid rocket propellants in spacecraft or water in life support systems in human spacecraft.

Examples of gravity in action

When standing still, you actually experience the force we call gravity when you feel the Earth pull us toward its center. Gravity pulls you down, and the floor pushes up on your feet. If gravity disappeared, you could push off of the floor and float away, never returning to the floor unless you found a ceiling to push off of again. You would appear to float around like someone in a “vomit-comet” airplane flight or an astronaut in the International Space Station.

You may have learned that the space station orbits the Earth because the force of gravity on it is balanced by the sideways force caused by the circular flight path. This force is called centrifugal force, the same that you feel when turning in a car, train, amusement park ride or similar.

I have flown in the vomit-comet flights with science experiments and Purdue University students, and indeed, the experience feels like there is no gravity.

Yet each time I fly, gravity pulls the airplane down to the ground for the landing on the runway. Therefore, we know gravity must be present, and yet people look like and feel like there is no gravity during part of the vomit-comet flight.

These research flights are typically full of qualified researchers who have earned an advanced degree, in my case a Ph.D.

How weightlessness in an airplane happens

One everyday event might help you understand how apparently gravity is both present and absent at the same time. When you ride in a car that turns to the left, you feel pushed to right. You may even feel pushed against the right-hand side of the car’s interior, and the door pushes back on you. Turning in the direction the car is traveling also changes what we call the velocity of the car.

Velocity encompasses both the speed of the car and the direction that it is traveling. Changing the direction feels like sideways gravity to you. Changing the speed, such as a sudden stop, feels like forwards gravity to you. Elevators starting and stopping feel for a moment like there is more or less gravity. These changes in velocity are called accelerations. Acceleration has an amount and direction, just like velocity does, and both are examples of vectors. Another vector is force, and one example is gravity, which pulls us down to the Earth’s surface.

You have experienced that acceleration feels the same as gravity does. Suppose you could find a way to create an “anti-gravity” acceleration: that is, an acceleration acting in the right direction and in the right amount to cancel out gravity. Is this possible?

The answer is yes – this is what happens in a vomit-comet flight and in an orbit.

The shape of the vomit-comet flight path is called a parabola. Pilots achieve this by flying upwards at an angle of about 45 degrees and then they level out and dive at about 45 degrees, which creates the acceleration needed to cancel out gravity. The maximum speed for the airplane and how rapidly the airplane can pull up before and after a parabola determine how long this acceleration can last, about 25 seconds.

Gravity pulls down on us, and by accelerating down in just the right way in an aircraft or spacecraft, we can feel like we are in zero gravity. The correct physical term is weightlessness, but zero gravity is a descriptive term that also describes the sensation, so even in the aerospace research world and in NASA, “zero gravity” is the common term used most often by experts.

Hello, curious kids! Do you have a question you’d like an expert to answer? Ask an adult to send your question to [email protected]. Please tell us your name, age and the city where you live.

And since curiosity has no age limit – adults, let us know what you’re wondering, too. We won’t be able to answer every question, but we will do our best.