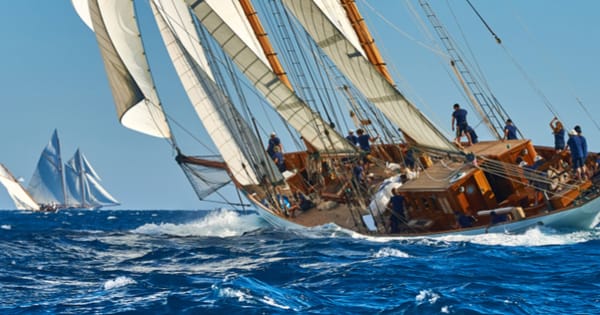 Rolex does not just stand for luxury, elegance, and exclusivity. Also in terms of functionality and versatility, the luxury watch manufacturer, which is now based in Switzerland, has set a memorial in the world of upscale sports with the model series of the Yacht Master. At the beginning of the 1990s, the company presented the Rolex Yacht Master with a white dial and a noble 18-carat gold case for the first time. The luxury watch was the first model of the Oyster collection, which was available in three different enclosure sizes.

The first official link between Rolex and the world of sailing was in the late 1950s in the history books. At that time, the luxury watch manufacturer signed a sponsorship deal with the New York Yacht Club, which together with the Royal Yacht Squadron from Great Britain pioneered the oldest sailing regatta, the America’s Cup.

Rolex is currently one of the main sponsors of regattas and sailing races around the world. Created as an important aid to navigators, the Rolex Yacht Master was very popular with its precise timing and guaranteed waterproofness.

For a long time, however, the Rolex Submariner, designed as a diver’s watch, was the favorite watch of professional sailors. The model was famous for its robustness. For more than 20 years, she was presented with the coveted trophy as the winner of the legendary America’s Cup. Following her example, Rolex designed the sail chronograph.

Although the yacht master had great similarity with the Submariner, it was only available in the gold case. As a result, this model was much more expensive and thus at the same time more exclusive than the Submariner. Over the years, various material variants were added. The Swiss company introduced the Rolex Yacht Master at the turn of the millennium in the Rolesium version. In this model, an innovative mix of stainless steel and platinum came to the train.

The Rolesium versions are generally considered to be the cheapest versions with an approximate price of ten thousand euros. Rolex had set itself the goal of creating a symbol for the desire for adventure with the watch collection, without losing the exclusivity of a luxury watch. After all, popular sailing chronographs have traveled the world aboard sailboats and yachts. The designs of the Rolex Yacht Master models are also distinguished by a diverse design.

With bracelets variants of gold, stainless steel or bi-color variants and simple but elegant design of the dials, a wide audience is addressed. The watch line is created for both men and women. A wide range of colors offers both sexes the opportunity to express their individual preferences.

At the beginning of the new millennium Rolex presented a chronograph with this new line of watches, which was designed to fascinate professional sailors. With a specially developed caliber, the Rolex Yacht-Master II now had a new exclusive feature that allowed sailors to set a countdown with mechanical storage that was easy to operate despite complicated technology. As you know, timing is one of the most important elements in regatta sport.