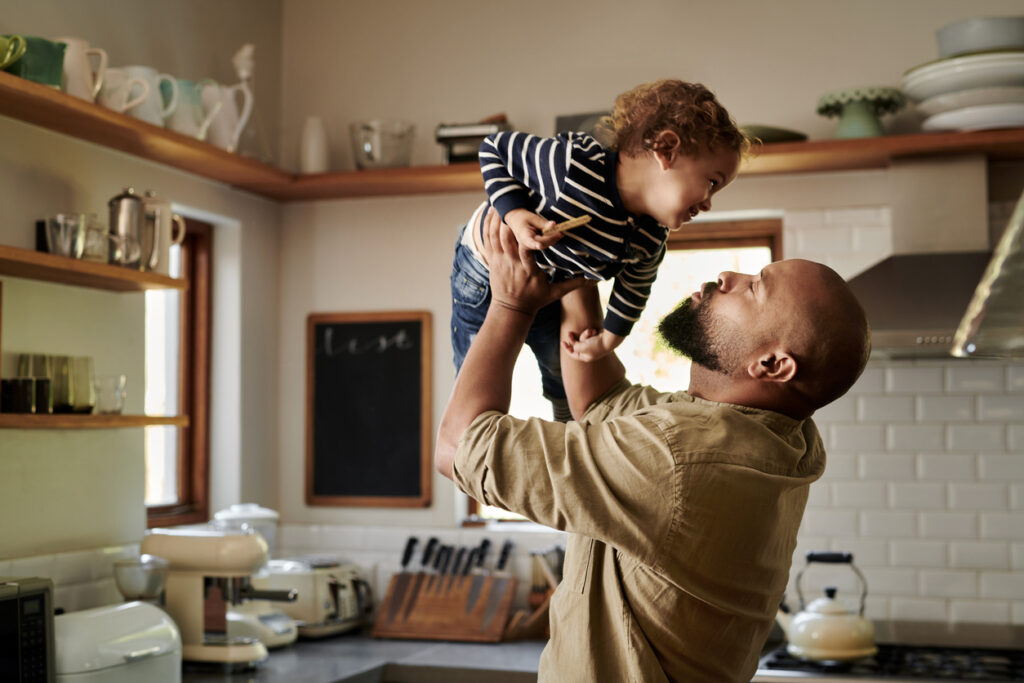 Being a dad and truly “arriving” as a dad are completely different things. Just ask Doyin Richards.

The NFL regular season (thankfully) starts tomorrow and if you ask any current player what his “Welcome to the National Football League” moment was, you’ll be hard-pressed to find one who says, “When I was drafted.” Oftentimes he’ll say it happened when an opposing player knocked him into next week, or when he learned that the “foolproof” techniques he used in high school and college games would never work in the big leagues.

It’s the same with fatherhood. Sure, a man feels like a dad as soon as he holds his baby for the first time – but that doesn’t mean he truly arrived as a dad. So with that said, here are my 31 “Welcome To Fatherhood” moments (yes, there are 31 of them. No chance I could pick just one).

1) I spent an hour in a Sanrio Store (aka, the Hello Kitty store) and didn’t lose my mind.

3) I realized that I’ve been kicked, elbowed, head-butted, etc. in the Hang Low more times in the 4.5 years I’ve been a dad than in my whole pre-dad life combined.

4) I happily rocked aprons and spent time in the kitchen to show my daughters that cooking is not “women’s work.”

5) I traded in my alarm clock in for one that cries at 3:00 AM or yells, “Daaaaaaaaadddddddeeeeeee!!!”

6) My beloved Los Angeles Lakers played like crap and I yelled at the coach through the TV to “put the team in Time Out” instead of “calling a Time Out.”

7) I talked to other dudes about how wonderful skorts and jeggings are.

8) I started using creative language to prevent cursing in front of my kids, like “Mother Fudge” or “Will you stop doing that Sugar Honey Iced Tea, please?”

9) I became at peace with the fact that I won’t drop a deuce in private for the foreseeable future.

12) I learned that most moms will find a good dad to be way sexier than a man with six pack abs. However, if said “good dad” also has six pack abs, then that just wouldn’t be fair.

14) Having a staring contest with my daughters became legitimate entertainment.

16) Reading books to my kids in strange voices became one of the highlights of my day.

17) I realized that I’m a pretty good stylist. If there ever becomes a toddler version of Project Runway, I’m totally going for it.

18) My eyeballs became sweaty almost instantly after my kids did/said something cute or thoughtful.

19) Speaking of eyeballs, I sustained odd injuries courtesy of my kids. Scratched cornea, anyone?

20) I created creative nicknames for my kids and used them in public (Captain Cute Face, Love Bug, Angel Sauce, etc.)

21) I ask myself, “Will my daughters actually eat this?” before I prepare any family meal.

23) I tried to spell my name to someone over the phone and said, “D…as in Dora.”

24) Dora told me at the end of an episode that she “couldn’t have done it without you,” and I actually believed her.

25) I learned wearing white around my kids is a very bad idea.

26) I learned washing my hands thoroughly after changing diapers is very important before putting my hands in my mouth (Don’t ask).

27) Whenever I heard someone claiming to be a parenting expert, I’d roll my eyes so hard that I could actually see my childhood memories.

28) I decided that if a restaurant has a kid’s menu, but doesn’t have an option for dads to change diapers (no family restroom or no changing table in its men’s restroom), they’ll never get my money.

29) I cringe whenever a dude equates parenting to babysitting.

30) I realized that any man who would run away from his responsibilities as a dad really isn’t a man at all.

31) I realized this became the best job I’ll ever have – and I knew that the second I laid eyes on my daughters for the first time. But hey – you probably saw that one coming.

Doyin is a best-selling parenting author, keynote speaker, champion of diversity & inclusion, and host of the Just Stick To Parenting podcast.

Hi, there seems to be a new NGO encouraging a “Fathers` walk” every Father´s Day: activedads.org. Maybe this is of interest for you …

FacebookTweetPinEmailShares5.2k
wpDiscuz
1
0
Would love your thoughts, please comment.x
()
x
| Reply
Share this ArticleLike this article? Email it to a friend!
Email sent!