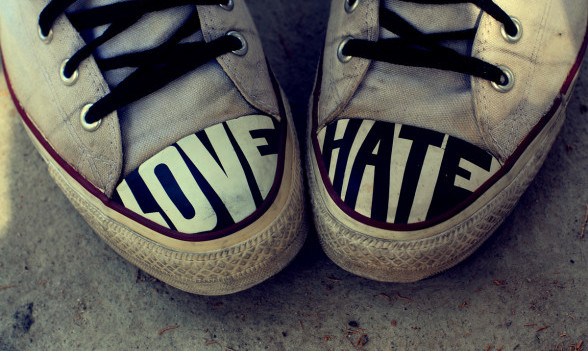 Matt Sweetwood knows how to raise kids. He has raised five by himself. He has some choice words for one father who raised his to hate, and for all the lives that were ruined as a result.

If your son or daughter came to you, enraged at a group of people based on their ethnicities, ideologies, or religious beliefs and you sensed he or she might commit an act of violence – how would you try to calm him or her down? Would you acknowledge that his or her rage and prejudice are justified? How does a parent in this situation prevent his or her child from going on to commit acts of terrorism?

Syed Farook, the father of Syed Rizwan Farook, responded to his son’s rage in the wrong way. In December 2015, Rizwan and his wife, Tashfeen Malik, killed 14 people and injured 21 during a Christmas party at the Inland Regional Center in San Bernardino, California. Rizwan and Tashfeen were killed the same day, in a shootout with police.

“He was also obsessed with Israel,” said Syed in an interview with La Stampa and translated in an article from The Times of Israel. “I told him he had to stay calm and be patient because in two years Israel will not exist anymore. Geopolitics is changing: Russia, China and America don’t want Jews there anymore. They are going to bring the Jews back to Ukraine. What is the point of fighting? We have already done it and we lost. Israel is not to be fought with weapons, but with politics. But he did not listen to me, he was obsessed…”

“In my 45 years in the United States, I shouted to him, I never had a weapon, He shrugged and told me, ‘All the worse for you.’”

Syed condemns his son’s actions, but he himself encouraged hatred and prejudice, instead of promoting peace and acceptance. By saying “be patient” and “what is the point,” he acknowledged that his son’s rage and hatred for Jews were justified. He should have taught his son to accept everyone and scolded any suggestion of violence. Instead, he passed his hatred and prejudices onto his son, while expecting his son not to radicalize and act on these views.

Syed Farook described his son as “an angel. good, obedient, [and] studious.” Indeed he was obedient and studious – but towards his father – who not only promoted these prejudices, but also has his own mental issues.

“My husband is mentally ill and is on medication but is also an alcoholic and drinks with the medicine,” Rafia Farook, Rizwan’s mother and Syed’s ex-wife, claimed in her 2006 divorce papers, according to a New York Times article.

Syed clearly does not accept that he contributed to his son’s actions. “Rizwan’s mother is very religious, as he was, and they united against me,” he said in his interview with La Stampa. “Once we had a dispute over the historical figure of Jesus. My son called me a godless person and he decided that my marriage with my wife had to end. They destroyed the family.” A father, or a mother, should take responsibility for his or her influence on how his or her child views the world. Rizwan was not born prejudiced, he learned it from his parents, and over time he evolved a more radicalized perspective.

Since Syed Farook is unable to take responsibility for his part in this tragedy, I say the following to him:

My five Jewish children and I are going to light our Hanukkah candles tonight to celebrate light, life and a future filled with our contributions to making this world a better place – a better place for everyone, including you and every person, regardless of ethnicity, race, or religion.

The warmth of our candles stand in contrast to the cold shadow that holds you now. You are left to think about what you did as a father that taught a son to hate. Whatever it was, eventually led him to destroy many people’s lives, his own, and — yours.

Facebook137TweetPin3EmailShares140
wpDiscuz
Share this ArticleLike this article? Email it to a friend!
Email sent!