Get Daily Email
Join/Login CLOSE
Home / Families / Breastfeeding: Can There Be Too Much of a Good Thing? 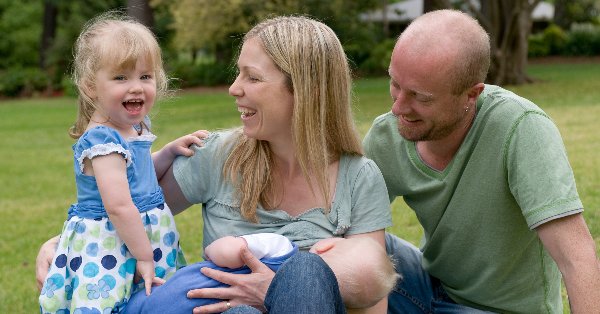 Dear Mr. Dad: Our son just turned two and although he’s eating plenty of “real” food, I still breastfeed him. My husband thinks it’s a bid odd, but several friends and even some coworkers are shocked. Is there a specific age at which I should stop breastfeeding? Am I doing damage by breastfeeding a toddler?

A: Let’s start with some background. The American Academy of Pediatrics recommends that, barring any medical problem, babies get nothing but breast milk for the first six months. After that, it’s “as long as mutually desired by the mother and child.” Many pediatricians suggest that starting at six months, parents should gradually introduce appropriate food and simultaneously decrease breastfeeding. At the end of a year, most babies will be weaned.

Breastfeeding is good for mom too, encouraging her bond with her new baby, reducing her risk of depression, and helping her lose weight after the birth. Longer term, it may reduce her risk of developing breast- or ovarian cancers.

There is absolutely nothing wrong with having a child nurse for longer than the recommended six months—as long as you understand that the kind of nutrition you’re providing is mostly emotional.

Ultimately, the decision as to how long to breastfeed a baby is one that only you and your husband can make. Nevertheless, a lot of people—as you’ve noticed—have strong opinions on the topic and they’re not afraid to share them, whether you want to hear them or not.

So when is enough really enough? One approach that’s been popular for a while is to give the child a vote. The idea is that your son will stop wanting to breastfeed when he’s ready to take that big step towards independence. This kind of “child-led” method works pretty well with potty training (the truth is that most kids will graduate to big-kid underwear only when they’re good and ready). And it works moderately well with solo sleeping (many kids make the decision to stop sleeping with mommy and daddy and move into the big-kid bed).

But letting your child run the show on nursing can be risky, since your definition of when’s a good time to stop nursing (or wearing diapers or sleeping in your bed) may be different than hers.

It sounds, though, like you’re less concerned about your son’s age than you are about the reaction from your friends, family, coworkers, and probably even strangers. And that’s not going to change anytime soon. So the only thing you can do short of never allowing your son to nurse around other people is to control how you respond to their comments and smirks. (Don’t you wish you could just smack people sometimes? Of course, I’d never recommend that). One thing you might try is to tell your critics about some of the many advantages of breastfeeding that I outlined above. But don’t get your hopes up. Bottom line: There’s nothing inherently inappropriate about having a two-year-old breastfeed. As his parents, how long that goes on is your decision. Everyone else will just have to live with it.