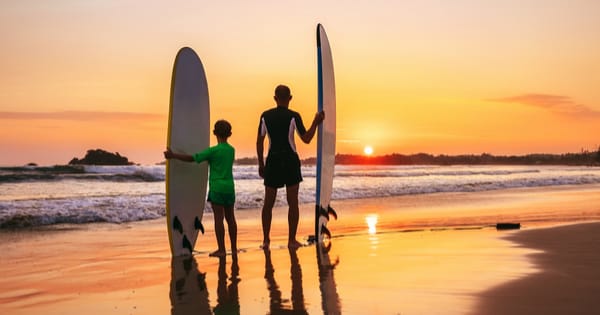 Slugs hang from the nostrils of my two kids. The strands of mucous dance in rhythm with their steps. Smiles burst from the tight neoprene hoodies framing their faces. Wet suits ward off the cold, but their joy cannot be contained.

Our senses fire: the needle numbness caused by 48-degree water, the gritty sand against our skin, the salty drops of ocean clinging to our lips, the pounding of waves, and the squinting of our eyes against the November sun fuels our laughter — warms us from the inside.

“That was rad! Some of that whitewash was up to Daddy’s chest!” I say.

“Daddy, Daddy, Daddy! It was like this over me!” exclaims Jaxen holding his hand over his head.

Not to be outdone by her little brother, Rayden says, “I dove through three giant waves in a row!”

Their excitement fuels my stoke, gives me confidence they will have positive ways to manage this world where we are increasingly programmed to feel not good enough, overwhelmed, and needing more-more-more! In this age of electronics, it’s more important than ever for me to provide and model these experiences to ward off Nature Deficit Disorder.

In the book, Last Child in the Woods, author Richard Louv describes Nature Deficit Disorder as the, “Human costs of alienation from nature among them: diminished use of senses, attention difficulties, and higher rates of physical and emotional illnesses. The term is needed because our culture is so top-heavy with jargon, so dependent on the illness model.”

Considering his book was released in 2004 before the blitzkrieg of handheld electronics, it’s scary to think what Nature Deficit Disorder is doing not only to our kids, but to us as a human race. Depression is on the rise, especially in teens. Suicide rates are up. Mass shootings by depressed and disconnected individuals occurs seemingly every week. Is this what Louv was afraid of? Are these societal symptoms of Nature Deficit Disorder?

They can’t stop shivering and smiling. It’s not just a fun experience that I am providing, but I am giving them tools to deal — for Louv also writes, “…new studies suggest that exposure to nature may reduce symptoms of ADHD, and that it can improve all children’s cognitive abilities and resistance to negative stresses and depression.”

We team hug for warmth and as a symbol of stoke, then I hug each of them separately giving my transgender daughter an extra squeeze. She will need nature to be her ally as she lives her truth and faces a harsher world than most. For the moment she is not stressed about being discovered, and I am not stricken by anger or devastation from divorce. There is just the tingle of our skin, and the slugs hanging from our noses.

You and your kids stressed out? Freaking out? Maybe it’s time to get out.
—

Facebook38Tweet3PinEmailShares41
wpDiscuz
Share this ArticleLike this article? Email it to a friend!
Email sent!