Every man needs a passion. For Andy Hinds, it’s the super-deluxe chicken coop he just built: The Coop DeVille.

You know how I got that new camera lens and now I think I’m a photojournalist?  And I said I was finishing up a big project and would be posting a million pictures of it? Well, here it is. Part I anyway.

Yep…I am now one of those insufferable urban chicken farmers. 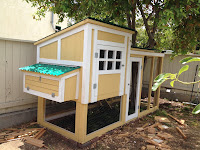 Here’s a quick rundown of how it happened. Our good friends who live a couple blocks away from us, and whose little girl is one of the twins’ best friends, started talking about getting chickens.

Or maybe my wife and I started it. In any case, we drank a lot of wine on a lot of different occasions and got more and more excited about the idea of pooling our resources and running a little poultry operation. They had a big yard and knew a guy at the farmers’ market who could be our chicken guru, and I knew how to build stuff. And we all liked eggs. Clearly, it was meant to be.

Toward the end of one of these dinner party/playdates, we researched chicken coop designs on the iPad, and within 15 minutes had ordered a set of plans off of eBay. (I wrote more about urban chickeneering in my neighborhood paper, here.)

And for the next three weekends, and some weekdays when I didn’t have any paying work to do, my buddy and I picked away at what the old coot who designed this thing calls the “Coop deVille.”

The plans aren’t bad, but they’re not exactly standard architectural blueprints.  It took a while to figure out how the hodgepodge of sketches, photos, and text fit together. Luckily, the designer, James, was pretty easy to reach by phone to clarify parts that I just couldn’t puzzle out.

It’s not the most complicated thing I’ve ever built–not by a long shot. But I wouldn’t recommend it for novice handypersons, either. Even if you’ve got skills, there’s another thing you need a lot of: tools. Obviously, you need all your basic hand tools–hammer, tape measure, chalkbox, level, etc.  But I swear I used a good 60% of my power tools, and I’ve got a garage full of them.  I even needed to buy yet another specialty pneumatic fastener, bringing the number of nail guns I now own to six.

The material list for the project was pretty basic.  Almost the whole structure was made of 2x4s and plywood.  Then of course there was quite a bit of hardware.  But the reason the lumber list was so simple was because, instead of making me buy twenty 2x2s and ten 1x2s and thirty 1x4s, etc., etc., ol’ James had me ripping all the pieces for the framing, the doors, the trim, everything, out of 2x4s.  I felt like Laura’s Pa on Little House on the Prairie, milling logs to build wagon wheels.  This system made shopping for lumber easy, and saved quite a bit of money, but I had to set up my table saw every single time I worked on it.  I was blasting sawdust out of my nose with the neti pot every night.

These are some of the power tools I used: table saw, circular saw (Skilsaw), jigsaw, miter saw, air compressor, framing nailer, trim nailer, pneumatic stapler, cordless drill, impact driver, router, random orbit sander…I’m sure I’m forgetting some.  You could probably make do without having all of those tools, but you definitely need a table saw.

is what we started with.

One pretty cool thing about the design of the deVille is that it’s modular.  You build all the panels of the coop and the run that’s attached to it separately, then screw them together.  This way, you could theoretically unscrew the panels from each other and move the whole shebang to another part of your yard.

Time passes…using a router to cut the plywood out for the windows on the front door. Note the stack of completed panels in the background

Once all the panels were built, we started screwing them together

Installing the floor of the coop

My apprentice, Rob, the dude who owns the house. The new guy always has to paint. Note brick foundation.

We decided to modify the design a little bit so we could keep the guava tree inside the run.  We figured the tree would provide enough shade, and the chickens would like the fruit.  It originally called for the whole run, as well as the coop, to be fully roofed in.  We just put chicken wire over the part where the roofing material would have been on the section where the tree is, to keep the chickens in and the predators out.

Doors installed on the coop and the run.

One of the design features is a nest box that projects off the side wall of the coop.  The chickens are supposed to hang out there and lay their eggs, and then we can open the hatch on the side of it and collect the delicious prizes from inside.  It seems like a pretty simple thing, right?  Well it took me about three hours to build it, and all these tools.

I have a lot of pictures of my table saw on this blog. I really love it a lot.

The nest box is finally done! (Well, except for the door/hatch, which took another hour to build.

We decided to make it yellow.

By the time I had finished the roof, Rob’s wife thought it was ready for chickens.  Rob and I were all, “No.  Not yet.  We have to finish trimming it out so it has that board-and-batten farmhouse look.  Then we have to paint all the trim pieces white.”  She was like, “This thing is for chickens.  There’s something wrong with you fuckers.”

Damn right there’s something wrong with us.

The gangway for the chickens to go from the coop down to the run. A little door operated by a rope that comes out of the front of the coop slides up and down to let the chickens in and out.

The nest box. This is where we will collect the eggs from some day.

Come on in, chickies. The stick going across the inside of the coop is the roost, where the chickens might sleep. It’s made out of last year’s Christmas tree.

Interior of the coop. Note faux-Carrera marble vinyl floor tiles. Another thing that made Rob’s wife think we had taken this thing too far.

So there it is. Stay tuned for the part where we get the chickens.  It has already happened, and you’d better believe I have some pictures to share.  WAIT. WHERE ARE YOU GOING? COME BACK…

Good grief. You sure know how to make a guy feel unmotivated.
And I’m glad you pushed back and tricked it out with the trim and roofing — looks awesome! But what are you going to do about the smell?

Joanna–it’s just the coop (or “loft”,as we’ve been calling it) that has vinyl flooring. The run (ground level) is dirt. We can scoop out the waste from the loft like a litter box, and rake the run.

I totally used these same tiles in the chicken coop I’m building! Still need to put on the finishing touches… perhaps a feeder integrated into one of the doors.

Corn, I told Andy I’m worried about how he’s going to muck out a coop with linoleum floors… Is it the same as with a dirt floor? Certainly safer from raccoons and coyotes who will dig under. Want to build a coop again once my little dogs have passed away (I know, that sounds horrible) but the coyotes here are SO intense (one was loping out of my front yard yesterday at noon!) and they hear the bok bok bok and they seem to call their friends and just hang out, so I don’t want to invite them around even… Read more »

Nicely done. I want to do some remodeling on the very basic chicken coop that my son recently built. You remind me again of my terrible weakness of underestimating the amount of time it always takes to do these projects. Maybe I should just be happy with rebuilding the door to the chicken run…LOL.

Facebook35TweetPinEmailShares35
wpDiscuz
5
0
Would love your thoughts, please comment.x
()
x
| Reply
Share this ArticleLike this article? Email it to a friend!
Email sent!