Get Daily Email
Join/Login CLOSE
Home / Families / I’m an Unemployed At-Home-Dad. Or Am I? 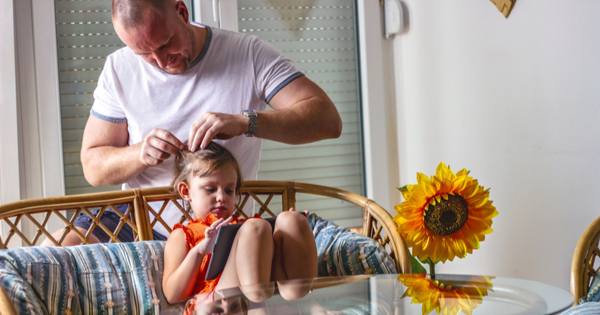 “I’m an at-home-dad,” I told the receptionist at the doctor’s office as she entered my information.

“So, unemployed?” she replied.

I usually let stuff like this go.  Mostly, it’s cool.

But sometimes, it does get to me.  This is one of those times.  The way she said it, well, it was a bit on the pity side.

I am so lazy that the idea of being paid for my work is just to much stress for my fragile ego.  I’m getting the vapors even thinking about it.  God bless my wife for allowing me to raise our children for the last eleven years.

I don’t remember asking for permission but surely that must have occurred.  After all, I’m a man without employment.  It would haunt me if I could bother to pull my butt off the couch and my Cheetos.

I feel the laziest when I am running the kids to their after school activities.  Driving isn’t real employment, especially if I don’t get paid for it.  And weeknights when I don’t get home until after 9 pm because practice ran long, that’s really the laziest part.  It’s so lazy that sometimes I take naps in the bleachers while I watch my daughter play volleyball.  I barely have enough energy when I get home to continue the laundry that never seems to be done.

It’s not as worthless though as when I coached myself.  I did that for what, nine or so lazy years?  Kids are super easy, especially in groups.

So I didn’t have to do much except worry about them, teach them the right skills, and make sure that they were developing as a person as well as an athlete.  Pretty worthless stuff.  After all, we all know parenting is more of a hobby.

It’s true, when my kids were younger, I spent all my time at home with them.  There were playgroups, outings to be planned,  and a house to clean.  All really lazy stuff that normal people don’t do.

In fact, I heard that other parents just go to work and give their toddlers a sandwich while they watch themselves all day.  I was tempted to do this with all three of my kids but it seemed like too much trouble.  I avoid all the hard decisions.  Those are to be made by working dads.  I’m the bum.

I usually try to keep my homeless looking self away from the public eye to save them the embarrassment of seeing a man without an income.  It makes people very uncomfortable.  And sometimes, if I’m honest, I am jealous of them.

What’s it like to have a morning commute where you can listen to your music the whole drive?  Or better yet, listen to nothing but silence.  That takes some hardcore energy.

Not to mention lunch hour.  The idea of a whole hour for lunch just for my self makes me all a-flutter inside.  I am also jealous of those that get to go to the bathroom without a three-year-old trying to crash the door down so he can stick his head in the toilet.  I don’t know what that is like.  In my lazy non-career, I have learned to pee on one leg while the other holds the toddler back.

And the money.  That’s what I’m too unmotivated to make.  I have no ambition.

That must be my problem.  After all, I don’t get paid for what I do which must mean that I am worthless.  The only worthwhile pursuits are those where you make lots of money.  So I have to imagine that drug cartel members are excellent fathers.

While good fathers work, I’m over here creating stupid memories that will last a lifetime.  How worthless is that?  I mean, memories don’t pay the bills.  They don’t keep the lights on.

It doesn’t matter that my wife can handle those things as she appears to be very good at her job.  Or at least I’m told, people don’t talk about jobs in front of me because it’s very embarrassing to speak of such things when an unemployed non-earner is right there.  I can only assume that those with the most money and no memories are the best fathers.

It keeps me up at night knowing that I have taught my children everything that they know.  They were bad lessons.  Kindness is probably overrated.

At my next teacher’s conference, I’ll have to see if she can take pity on my kids.  My daughter made the honor roll last quarter.  My son excels in science.  My youngest’s reading is off the charts.  I had nothing to do with that so I will ask my kid’s teacher if she can just keep the kids until mom gets home.  My wife should get the kids all the time.  I shouldn’t even be allowed around them.

I should probably make my wife skip all her work stuff and come home.  I know it worries her that she doesn’t worry.  She has career building things to do and the kids will be home alone with me.  I think what women need more in life are more worries and concerns.

And let’s face it, I have sacrificed nothing to raise my kids.  My old career was too stable and the upward trajectory was scary.  Cheap health insurance is overrated.

Besides the weirdo judgment I get from strangers, the looks at the park, or when I am asked how long I’ve been unemployed.   So giving all that up was really not a sacrifice at all.  What I got in return were weird looks at the park.  That’s super fun when I have to make sure I point out which kid is mine on a Wednesday afternoon before someone calls the cops.

We live in a world where it is seen as lazy to actually want to take care of your children.  I’m sure the millions of at-home-moms are cringing at that thought.  The bottom line truth is that I have never been pressed as hard, or as often, as I have as an at-home-dad.

Work was a cakewalk.  There was downtime and money.  There were luncheons and quiet moments where you could focus.  There wasn’t this overreaching pressure that if I really screw this up, I will have ruined my only chance to raise responsible human beings.  I do miss work, but not for the reasons that you would think.

So what did I really sacrifice by staying home with the kids?  Nothing.  I’m exactly what my family needs me to be; an unemployed at-home-dad.

Facebook127TweetPinEmail1Shares128
wpDiscuz
Share this ArticleLike this article? Email it to a friend!
Email sent!