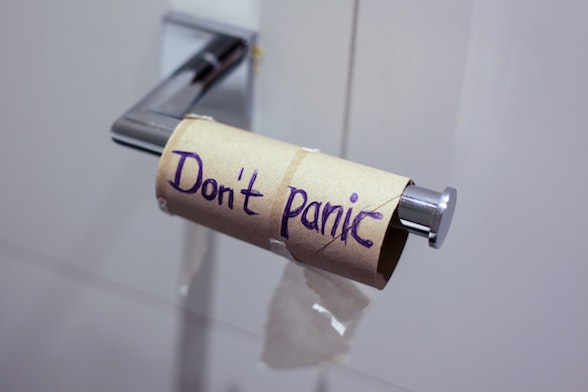 At the final Presidential Debate (thank god!), Joe Biden said something that’s stuck with me all week:

I believe this to be true, except when it comes to possibly running out of toilet paper. Then we really go bonkers.

I’ve also thought that if there were to be a shortage of peanut butter, then everyone would take to the streets, arm in arm, singing for its safe return to grocery store shelves.

That’s the kind of stuff we panic about. Insignificant trifles.

And most of our trifles are self-made. That’s what really gets us going—our own petty troubles.

Did you know: Americans rarely care about what troubles their fellow American?

Have you ever listened to two Americans talk to one another? It’s simply both people trying to one up each other and barely waiting a breath in between to do so.

That’s just how we are. We’re not a collectivist society. We don’t ache for our neighbor.

And the most ironic part of all: we claim we do. So many of us believe we’re just like Jesus, and yet, we wouldn’t waste a moment grabbing that last roll of toilet paper, just to save our own behinds.

As we near the end of this scary month, consider what would really make you panic. Does anything make you say: “I have to act right now!” ?

If it does, does it only involve you?

I hope one day we figure out how to channel our inner apathy toward something productive, like, I don’t know, keeping this nation a nation?

Until then, let’s just remain calm. There’s absolutely nothing to worry about.

Photo by Jasmin Sessler on Unsplash

Taylor García is the author of the forthcoming novel, Slip Soul, from Touchpoint Press (https://touchpointpress.com/authors/taylor-garcia/) and the short story collection, Functional Families, from Unsolicited Press (https://www.unsolicitedpress.com/store/p332/functionalfamilies.html).

García's stories and essays have appeared in numerous journals and magazines, and he holds and MFA in Writing from Pacific University Oregon. He lives in Southern California with his family.