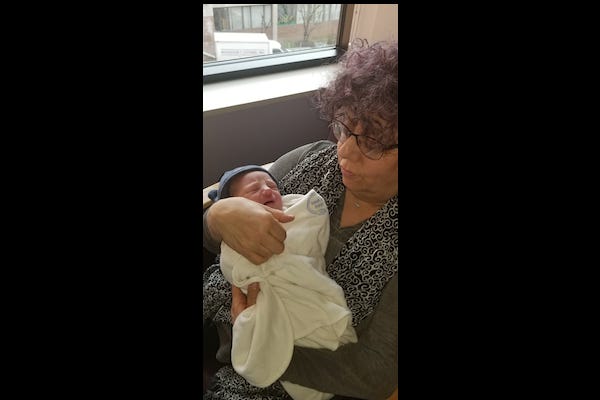 He arrived on the planet on January 21, 2020, at 11:45 a.m. Cosmically coincidentally, it was also World Hugging Day, which delights this Hugmobster Armed With Love who does free hugs events worldwide. This kiddo will have the opportunity to receive many and as he grows, I will remind him that he gets to decide about whether he is a yes or a no to hugs.

According to my daughter-in-law, Lauren, his eyes opened pretty quickly as he took in the world around him. Despite his new digs being nowhere near as cozy, comfy and conducive to rest as his previous accommodations, Dean Michael-Phillip Moser seems to be adjusting well. Along with her parents and sister, I sat in the waiting room and eagerly anticipated his debut. We knew months ago that he was a boy. She and my son Adam were keeping the name under wraps until he was born. Even when Adam came into the waiting room after Dean was born, he still didn’t spill the beans. He said Lauren wanted to introduce us to him by name.

When we walked in, we saw him nestled in her arms. She looked exhausted but glowing with delight that this tiny human had finally landed. Of course, I cried when she told us what they had named him. The first name which means ‘valley’ was picked because they liked it. The hyphenated middle name was bestowed in memory of my husband who died in 1998 and for Phil Garber, a dear friend who became a surrogate father to Adam. He died a week before their wedding. Clearly, this kiddo has a powerful name and some guardians on the other side of the veil to watch over him.

Adam had told me that he wanted my grandchild to call me Bubbe which is Yiddish for grandmother. At first, I resisted since my own paternal grandmother was a stereotypical over-protective Jewish grandmother. When I realized that she was a woman of valor who loved fiercely, I saw a kindred spirit. I also knew I could re-define what grandparenting meant. It occurred to me that although Adam would say he wasn’t spiritual, it was a link to his Jewish heritage, so Bubbe I became.

I raised him as a single parent when Michael died after our son turned 11. I was 40 at the time and was blessed to have a village to help me raise him; Phil and his wife Janet among them. Of course, she cried when I told him the little dude’s name. As a single mother of a son, I sometimes felt lost as to how to navigate the gender waters. We are told that we need to be both mother and father. An impossible task since cultural norms reinforce that we come from two divergent planets and speak sometimes confusing languages. Blessedly, I chose platonic male friends to translate.  I like to say that we grew up together and at 32 and 61 now have the kind of relationship that wasn’t possible back then. One value that I held for him was that he be a man of integrity that people could count on and that his word could be trusted. That he has achieved in spades. When he and Lauren committed to each other, she thanked me for raising the man of her dreams. My hope for my grandson is that he be that for a partner, a man of someone’s dreams.

Yesterday, I had the opportunity to burp him after he was finished ‘chowing down’. As I gazed down at him, his tiny fingers stroked my cheek and he grabbed ahold of my necklace. His own eyes were wide open as he looked around. I know that at this age, he can’t really see or discern much of what is in his environment. I look forward to a time when he can do that and take it all in.

What I wish for him:

As I look at this list, these are the same things I wished for Adam when he was a child.

I wrote an article a few days before he was born called 20 Secrets No One Tells You About Becoming A Grandparent.  I made assumptions based on what I imagined I would feel. I truly underestimated how massive the feelings would be. My child’s child is now a reality, not just a someday-maybe fantasy. I have watched him through the pregnancy and how protective he has been of the two of them.  Once Dean showed up in front of him, he has slowed his pace and has changed and cradled, fed, burped and dressed his little one. He has asked for my presence to support and assist, to guide. I joke that he is encouraging his ‘weird hippie mom’ who sports purple hair to influence his child. Pretty cool.

May we all know the magic of baby-love. I am looking forward to watching my grandchild as he thrives and makes a positive difference in the world.