Kyle Wiley considers himself a modern dad, yet he still has hang ups from the more male chauvinistic era

I’ve always considered myself a pretty progressive dad, riding the wave of modernity in the 21st century. In our household, the lines of the past that steadfastly identified what was considered “man” and “woman” responsibilities were more opaque and everything from diaper changing, feeding, paying bills and getting up late at night to tend to a sleeping baby is divided based on whoever’s hand is on deck at any given time. It’s not the easiest job in the world, but to be honest I felt pretty good about being what most people would label a “modern dad” and I wore that title like a badge of honor.

My title was put to the test however the day my wife brought this home for my son: 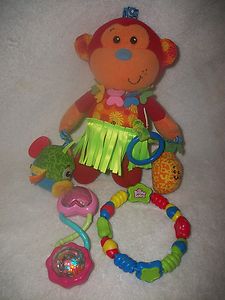 The first thing I said to my wife was: “Um…that can’t be for my son. That thing is wearing a skirt.”

“Well, skirts are for girls, and he’s a boy so we have to return it for a monkey with a pair of jeans or something.”

My wife rolled her eyes, calmly asserted that I was being silly and eventually the toy was given to my son. That little hula monkey ends up being one of his favorite toys as an infant and I realized that I indeed was making a big deal out of nothing.

Fast forward to his toddler stage:

My son was asked what his favorite color was and he emphatically replied that it is pink. Deep down his answer made me a bit uncomfortable, but I didn’t show it: I gave him a hug and told let him know how awesome his selection was.

But why did I have that reaction? What hell was I afraid of?

Well for starters, pink is a girl color. It’s not just “a” girl color, but the international spokescolor (yes, a made up word) for the female gender. You see it on every dress, tutu and Barbie convertible that is marketed towards little girls. So how could it be that my son, who loves to collect bugs, do karate and play with race cars would actually like something that is so obviously… “girly”?

When I was a kid, if you we’re a boy who admitted you were a fan of pink, you’d instantly be labeled a sissy and be the object of ridicule of every bully in a three classroom radius. I suppose my fear stemmed from a misguided desire to protect him from that kind of scrutiny. (I also believe that it is more frowned upon for little boys to explore activities outside the perceived gender role, than it is for girls to do the same. But this is subject matter for another post!)

After some reflection however, I began to understand that the issue was not with him liking this color, but with the fact that I had a problem with it at all. I then realized that maybe I’m not as much of a forward-thinking father as I had thought. Maybe I’m just as guilty of the same male chauvinistic stereotypes that were the norm during my father’s generation and the generation before his.

After I accepted this reality, I then decided to explore these feelings in order to understand, then overcome them. And so began my journey…

So, who decided that pink was a “girl” color anyway? After doing a little research, it turns out that the practice of associating colors with gender is a fairly recent concept.

When you look at the above picture, what do you see? If you said girl, you would be wrong. Not only is this frilly young lad a boy, he is none other than Franklin D Roosevelt, one of the greatest US presidents who ever lived. This picture, which was taken in 1884 is a reflection of the views of that time period. It was actually a normal practice for parents to have both boys and girls wear gender-neutral white dresses throughout their early childhood. By age 7, boys would finally start wearing pants and would get their first haircut. If I had to guess, I would suspect that this was done as more of a cost saving measure by the parents.

According to an article posted on the Smithsonian Magazine’s website, there was a time as early as 1918 when pink was considered the primary color for boys and blue for girls. The public perception began to change around the time accurate prenatal testing had become standard practice. Child and infant clothing retailers, looking to make money, capitalized on this trend began to shift their products and advertising campaigns toward gender specific colors.

Then the cycle is perpetuated: as these gender specific colors become more defined, as parents and as a society, we tend to push these values onto our children earlier and earlier. I’m almost certain that my perceptions were directly influenced based on this trend.
So basically, the wool was systematically pulled over my eyes to believe the pink is a color exclusively for the female sex from the moment I arrived on this earth.

Despite this however, there’s already evidence of the tide beginning to change.

This picture of a mother and son with pink panted toenails, was taken for the 2011 J. Crew spring catalogue, and caused quite the controversy, but it is also an indicator that the mainstream is once again evolving and pushing boundaries.

For me, the picture didn’t bother me at all. I figured, whatever that little boy’s parents choose to do with their child is their business. Little did I know that my son would once again unknowingly push my personal boundaries. I came home from a long day’s work to a giggling wife. Perplexed, I asked her what was up. She sheepishly opens up her phone and shows me this picture: 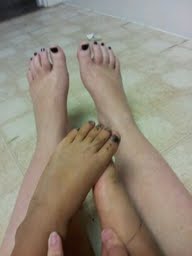 Apparently, he saw mommy painting her nails and thought it would be cool to do copy her. He then grabbed his marker and proceeded to color his toes. My wife thought it was hilarious. I’m ashamed to say that I blew it out of proportion and was pretty upset. I considered scolding him or at least explaining why what he did was wrong. Thankfully my wife brought me back down to earth, just like with the hula monkey situation and reminded me that I was being ridiculous. He was only a toddler and if I did end up confronting him with negative reinforcement, it would have likely done more harm than good. It has been about a year since that ordeal; he has never brought it up nor attempted to do such a thing again.

So going through all of this, what lessons have I learned?

I’ve learned by understanding the false stereotypes that were taught to me in my youth, I am able accept the past without compromising my future. All that matters is the fact that I love my son and as his father, it is my job to ensure he is raised in an environment where he feels safe to express himself. And that includes him deciding to like pink, purple, blue or any other color he so wishes. Or if he ever wanted to try on his mommy’s shoes. Or any other thing that someone might consider “girly”. I will almost bet you that in the eyes of a child, most activities that we as adults tend to categorize with a gender are completely neutral to them.

Plus, who knows? Maybe in 50 years, pink will be the “it” color for boys once again.

—this first appeared on Fatherly Stuff

Kyle is a dad who regularly writes about his experiences on his blog www.fatherlystuff.com. He currently lives in Connecticut with his wife, his two young boys, and a bunny.

Wow. Thank you all for taking the time to read my article and provide your varying perspectives . It is very much appreciated.

And a very special THANK YOU to Jo Paoletti, as it was her research that was the basis for the Smithsonian artile that I referenced and therefore a major catalyst in my development as a father.

Excellent post. I blogged a response, which I hope you will enjoy.

Your article is fantastic , but I have a slightly different perspective on this whole “pink is for girls” thing.

Look at breast cancer, no one that I have ever heard of has made a big deal out of the fact that it is a pink ribbon to designate the issue is a womans issue , I wonder if this is another case of when “pink is for girls’ is a benefit, people are all for it, when it is negative or neutral they don’t want it.

The only problem: men get breast cancer, too. Labeling it a “female disease” doesn’t help.

There is an interesting history behind the pink ribbon, as well. In one of its earlier incarnations, it was peach.

You got a problem with pink, you go through me.

Be afraid. Be very afraid.

Facebook17TweetPin1EmailShares18
wpDiscuz
8
0
Would love your thoughts, please comment.x
()
x
| Reply
Share this ArticleLike this article? Email it to a friend!
Email sent!