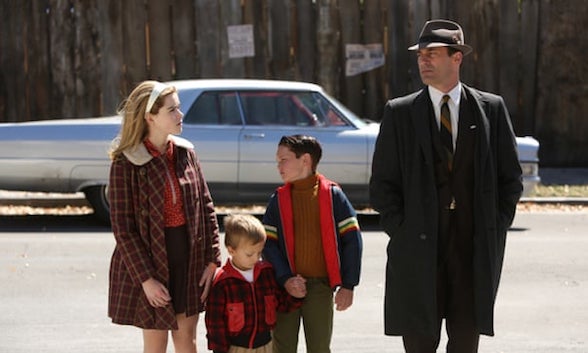 The Bad Man Within

At face value, Don Draper was the perfect man: a strong, silent, high-powered Madison Avenue ad agency executive with a beautiful wife and two doting children. How could there be anything wrong? Here’s how the protagonist of AMC’s hit show Mad Men was absolutely terrifying: his duplicity.

If you never watched the show: spoilers ahead. To put it simply, Don made the word “two-timing” look innocent. From clients’ wives and his kids’ teacher, to waitresses and his secretary (whom he eventually married) the guy went to bed with just about anything that walked. His wife, Betty, dutifully waited in the suburbs for him to come home. When he did care to return, he was almost always fully sloshed and all out of love.

The show reveals plenty of backstory so viewers can make some sense of his dark side: how he grew up in a brothel and went on to steal his fellow soldier’s identity in World War II so he could start anew. And yet, the man just kept up his bad behaviors and was rarely punished for them. Instead, he left destruction in his wake that his wives, kids, and co-workers had to clean up.

Such was a man of the 1960’s—the beneficiary of manhood in what might have been peak patriarchy. There was one defining moment for the show, and that was the last episode where Don finally owns up to his misbehavior by letting all his emotion out at a retreat center. (I’ll admit I cried, too.)

Watching men or characters like this help remind us to make good choices should we veer too far into our vices. While a certain part of us likes to root for bad men like Don Draper (a surrogate for the bad man within our own psyche), we know the scoundrel eventually implodes. Whether self-inflicted or forced upon him, his downfall is the result of his own misdeeds. And as for his redemption, he gets only a small morsel, one he must ration the rest of his life.