Get Daily Email
Join/Login CLOSE
Home / Families / Should This “Gay Dad” be Writing as Just a “Dad” Instead? 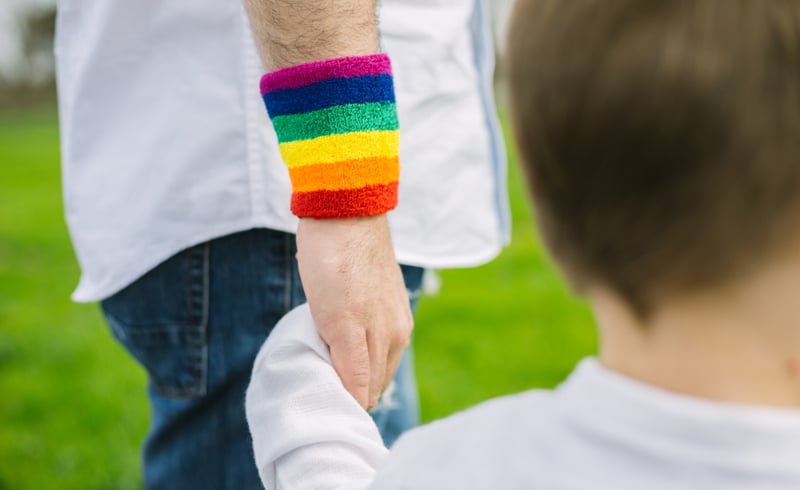 Is it time for “gay dads” to be known as just “dads?” Maybe. For writer Rob Watson, that day has not yet arrived, he is holding onto the adjective for now. Here is why.

“It’s time to drop the ‘gay dad’ out of your titles and just be a ‘dad’,” read the note on my Facebook page. Certainly many were clamoring that it was time to call “it” “marriage” instead of “same sex marriage.” Was it time for me to sink into the heteronormative fold as well?

Not on your life. I worked too hard, and there was still too much left undone. This definition is with me for a while.

A friend of mine, Henry Amador, blogger and founder of Dadsquared, addressed this question in a piece called “The Battle Cry of the Gay Dad” for The Next Family. He captured the essence of the extra effort those of us who are gay dads have gone through to become fathers. He said, in part:

So you ask, why do I call my self a Gay dad? Well because I made it and that is what I am.”

I felt moved by his words and related to them. I felt compelled to share them, and soon thereafter, at the time, was being called on to defend them.

Here is my response, to those who need further explanation, and to the world:

There are many paths to fatherhood, and there have been many great types of fathers. Unfortunately, there also have been the accidental and unwilling fathers, as well as the fathers who showed up and then checked out. Do we need to qualify each dad as to which of those groups he is a member? No. It is true that gay dads by definition are “intentional dads” in the vast majority of cases. Not only must we have sought to become one, but we usually had to plan, invest and sometimes train to qualify to become a dad. Does this inherently mean that a “gay dad” is better than a “regular dad”. Not always. I trained for three years, and fostered a number of children before getting my own. When they came into my life, I was not a parenting novice. That being said, there are no dads that I care to go up against in a competition. I know many awesome dads, most with some talent or other that I do not possess.

I do not call myself a “gay dad” because I think I am better.

Many dads walk into roles in their families that are handed to them. Parents of previous generations, popular culture, televisions, movies and even self-expectations have molded the roles. Gay dads have the entire parenting spectrum as an option. Gay dads may be “bread-winners”, “home-makers” or a combination. We work with our partners and pick up the parts of the parenting role that suits our talents or abilities. Many modern families with more and more stay-at-home-dads are doing the same.

I do not call myself a “gay dad” because I feel freer of gender identified roles.

Science is now telling us that gay dads are neurologically different than either straight moms or straight dads. A new study by neuropsychologist Ruth Feldman and published in Proceedings of the National Academy of Sciences observed that “gay fathers raising children with their husbands seemed to be both mom and dad, brain-wise. Their emotional circuits were as active as those of mothers and the interpretive circuits showed the same extra activity as that of heterosexual fathers.”

I do not call myself a “gay dad” because my brain apparently resembles the breadth of both a mom and a dad.

It should also be noted that I also do not call myself a “gay dad” in the day-to-day activities with my kids. In my talks with my boys I do not say, “Well guys, it is because I am your gay dad.”   I am just “Dad.” I do not walk into my son’s classroom and introduce myself to the teacher by saying, “Hi! I am Jesse’s gay dad.” I am just “Jesse’s dad.”

I do not call myself a “gay dad” every day.

Throughout the 1990s the Catholic Church called gay people “intrinsically disordered”, and declared that same sex parents were doing “violence” to their children. There are many who still believe these concepts. Currently, if I moved my family just a few hundred miles east, because I am a same sex parent, our legal family protections would be thrown into turmoil and protections for my sons would change. In Texas, two partners fathered a set of twins and neither of them were permitted to be listed on either birth certificate. Throughout the country, many kids who come out to their families are not only not told that someday they too could become “gay dads” if they wish, they are thrown out of their homes and make up the largest percentage of homeless teens in the country. A few years ago the Boy Scouts of America sent a survey out to all its participants asking whether I was worthy to be considered safe around other families children. The answer they got was “no.” Only this year have some troops been able to say “yes.” Often when my writings are published, I am criticized by strangers who say things like “your children were underprivileged by being placed in foster care, haven’t they suffered enough without you depriving them of a mother?”

I will write as one until a whole generation of people do not see being a “gay dad” as any different from any other parent. I will lay out the details of my life so that “gay dads” can become known and seen for the blissfully ordinary creatures that we are.

I will write as a gay dad so that if it turns out that one of my sons identifies as gay that he will not feel that life has dealt him a raw deal. In that moment he will see himself as completely whole and able to achieve his dreams.

He will see that, if he wants, he can grow up and be… just like his dad.

Updated from a previous article and is republished on Medium.

I’ve been saying all along that I didn’t understand that gays want to be treated like everyone else, then why label yourselves as being not like anyone else.

THANK YOU, you are a “dad.” no more, no less. You love your kids like a dad, you take care of them as a dad, everything you do with and for your kids, you are doing as a dad.

Thanks for the article, Rob.
Very interesting.
I am a straight, sole parenting Mum, who just got through treatment for cancer.
Being a parent, is awesum.
Am happy to hear you also are able to enjoy being a parent.
Ignorant people, define us in ignorant ways….to some, I don’t really qualify as a parent,because, I ‘just have the one,’ child.
After cancer, my affirmation is only, ‘I can do this,’
If your kids see your authenticity, that’s all that matters.
Good for you and Thankyou for sharing.

FacebookTweetPinEmailShares127
We use cookies on our website to give you the most relevant experience by remembering your preferences and repeat visits. By clicking “Accept”, you consent to the use of ALL the cookies.
Do not sell my personal information.
Cookie SettingsAccept
Manage consent