He’s over 50, he runs marathons, he is a badass and he happens to be a first time dad. Frank Priegue gives first time dads some advice.

Being a parent is on-the-job training.  Although I’m not the baby spaz I was when Cristian was born, certain things still make me shake my head.

Although I came into parenthood with open eyes, there was plenty that we didn’t expect when we were expecting. So here is my list of Ten Things I Learned During My First Year as a Dad:

1.Breastfeeding – Boobs are great until you have a baby. Some newborn babies have problems breastfeeding. Babies have to figure it out, because breastfeeding is not automatic.  At the hospital, we tried everything: multiple lactation specialists, using a http://kidsco.org.uk/  breast pump, and we even hooked my wife up to an industrial-strength pump (which resembled some of my grandfather’s commercial dairy equipment).  None of it worked.  Finally when we were home, Cristian got the hang of it.  Maybe all he needed was some privacy.

2. The Baby Bag – The baby bag is a parent’s life support system: Ignore this at your peril. Failure to pack diapers, baby wipes or formula will have dire consequences.  My wife packs the bag daily, she packs the contents of a one-bedroom apartment into the bag.  Makes me wonder, Why are the important things like diapers always at the bottom of the bag?  And if this is such a problem, why don’t I get to pack the diaper bag?

3. Squirming Baby Ninjas – I knew changing diapers was part of this Dad/Baby thing—I was ok with it.  However, no one mentioned twisting, rolling and squirming on the changing table during the prenatal-parenting classes.  Be warned, they are baby Ninjas and they will escape if you are not on your game.

4. Diaper Blowouts – Every parent has experienced one.  Few things can change your mood faster than a diaper blowout. “How did he get chocolate pudding on the back of his onsie? Nooooo!” My son has had two blowouts that are flashbulb memories to me. First was the Mother’s Day blowout in a Cuban Chinese restaurant with the tiny bathroom and no changing table. The second was the Wake-Up blowout requiring a new cover on his changing table and the crib’s bedding.  My wife and I needed a shower afterwards.

Diaper blowouts are the one thing that will get you going faster than a cup of strong coffee.

5. Dog Get’s a New Role – Before my son was born, Chico was our baby.  When my wife and I read the newspaper in bed on a lazy Sunday morning, he’d be curled up next to one of us trying to hog the mattress. Chico had a better life than most people, until the baby came along. We still love you Chico, but you have a new job: Guard Dog.

6. There Are No Quick Trips to Pick Up Anything. Ever.

There are no quick trips to Carter’s, Babies R Us, or Bye Bye Baby.  This one may run along gender lines… If you send me to pick up diapers, baby food, and sippy cups the trip takes about 15 or 20 minutes because I’ll pick up diapers, baby food and sippy cups.  When I hear that we need to pick up a few things for the baby, I cringe because “quick trip” is code word for detours.  Watching her ooh and ahh looking at baby clothes makes my uterus pinch.  My advice to new Dads, bring a fully-charged tablet and find a comfortable chair where they sell baby furniture, this is going to take a while.

7. Prunes for the child or for the parent?  It is good advice to introduce a new fruit or vegetable for about three days ensuring the baby isn’t allergic to it before moving on to the next one. This is all common sense.  Then there are prunes. Dark, sticky and gooey they look the same in the container as they do in the diaper.  I’ve spent a sleepless night or two wondering about the logic of feeding a baby with a well-functioning digestive system prunes.

8. Get Used to Having a Target on Your Head. Sorry gents, but your beautiful baby will pee on you. And then he will laugh. It’s not as bad as a diaper blowout but still an eye-opener. Our son peed on the doctor during his first pediatrician appointment.  After a year, I’m pretty good at dodging the spray, but he is improving his aim. With time, you too will be a diaper-pad guru. 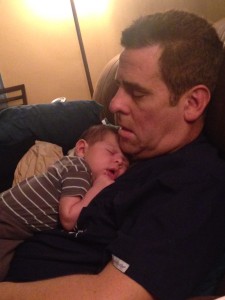 9. Baby’s Sleeping Habits are Un-sleeping Habits for Parents. File this one under “Should have known better.” We established a routine at about five months: feed, bathe, bottle, bedtime and he would sleep from about 10 pm until about 5 am.  My wife and I thought we had this sleep thing under control. He must have figured us out because everything changed.  Now he’s up once or twice a night, sitting in his crib like a Baby Buddha waiting for a bottle.

10. Competitive Parents – I’ve been around a lot of babies in the past year.  Our building welcomed five and our family and friends had six more. That’s a lot of babies. Parents compare notes.  It’s harmless at first, checking on eating and sleeping patterns. Little by little, it gets competitive.  Your baby has two teeth, mine has eight. Yours started crawling; mine walks around the block.  I’m waiting for the inevitable, yours isn’t toilet trained yet?  Ours was toilet trained months ago, and now he’s training others. It’s not a competition.  Let’s all take a breath or maybe a nap. Your child is as special to you as mine is to me there’s no need to be competitive.

If you want become the best parent you can be, join the conversation at the Good Men Project. Membership has many benefits: Free access to exclusive content (such as live events, e-books, weekly conference calls and invite-only video-chats.), access to writers groups; and ad free experience.

Originally appeared on I’m Not a Grampa.

Photos by Bradley Gordon and I’m Not a Grampa.

Some solid advice here for those looking to become a dad. A good mix of facts with humor