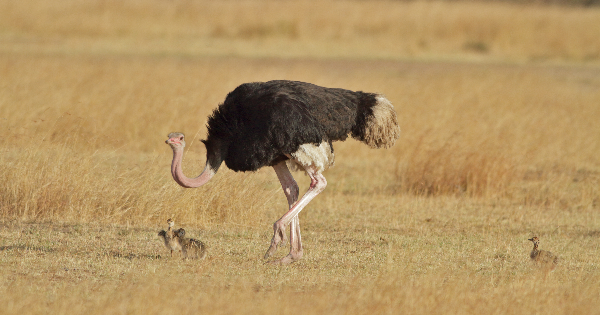 Regardless if a man is a full-time father (a house-spouse) or a noncustodial parent (a divorced dad), there is a multitude of children’s books is which the daddy is simply not there. Other children’s literature (kid lit) portrays the dad as a buffoon, a grumpy old bear, or worse – that he deserted his family.

But there are a few books that show a more positive image of reality; that fathers love their kids, that men are nurturing caregivers.

In the animal world — and in kid lit — the father is sometimes absent. But when my son was young, we discovered I Love My Daddy Because… (by Laurel Porter Gaylord) and were delighted. At last, here was a book that showed the variety of attributes men — and animals — share with their young.

The little girl in the book exclaims “I love my daddy because he plays with me.” Colorful pictures of animals in the wild are then shown with their offspring.

Nell Reed, Education Program Curator at the San Antonio Zoo, confirmed the accuracy of many scenarios in a 2002 interview.

”I love my daddy because he keeps me safe and warm,” the chick, nestled in his father’s feathers, says of the emperor penguin. Nell said this is true. “The male does all the incubating. Once hatched, the chick sits on Dad’s feet, surrounded by the fat and feathers of the father.”

The baby homed puffin says, “He brings me dinner.” This is true of many birds, Nell said. “Both parents take turns gathering food.”

The bald eagle chick says, “He is big and strong.” “Eagles mate for life. And they do take care of their young,” Nell said.

The lion cub says “He takes naps with me.” Nell said you’ll see the cubs laying against the male lion. “He plays with the cubs as well.”

The beaver kit and the muskrat kit love their daddies “because he can build a house.” “The young actually live there the first few weeks of life,” Nell said. “Then they can go out with Mom and Dad to hunt for food.”

The baby chimpanzee loves his daddy because “He makes me laugh.” Nell said chimps play with their young. “The babies have a little white tuff of hair on their rear. And that’s a real visual signal to daddy that says ‘Hey, we’re a baby, and to let us get away with more than if we’re an adult.’”

The calf of the giraffe says his daddy “helps me reach things.” “No, I don’t think so,” Nell said. “That would be a stretch.”

Grey wolf cub says “He sings me songs.” True, Nell said. “The whole pack, Dad and the other males, help take care of the pups,” she said.

The chick of the common loon says “He takes me for a ride.” “I’ve seen pictures of them on the backs of their parents,” Nell said. Other aquatic birds will give a ride to their babies. “We’ve got black-neck swans and I’ve seen that behavior.”

Baby gorilla loves his dad because “He teaches me to be brave.” Nell said, “Male gorillas have to take on other males. So the modeling behavior is there.”

The red fox and young watch a porcupine, “He teaches me to be careful.” Nell said most foxes stay in a family group. “So the kits do learn what to catch from Dad.”

The book shows a jaguar and kitten, big and little anoles, parrots, spider monkeys, toucans, and two-toed sloths hidden in a display of color. The caption says, “I love my daddy because he plays hide-and-seek with me.”

This is a nice picture for children to look for the animals. “But half of it is fiction,” Nell said. ‘Male jaguars aren’t around. They breed and leave.” Anoles, male or female, have no bond with their young. “Rarely in the reptile world do you see any type of parenting behavior at all,” she said.

“Spider monkey Dad is around,” Nell said. “He does play with the babies.” Parrot Papa helps out with feeding. And while toucan Dad may not play hide-and-seek, Nell said he is definitely involved with his young. But not the sloth. “He doesn’t have anything to do with his young,” she said.

The calf of the musk oxen says, “He protects our family.” That’s probably true, Nell said. “They are herd animals. All the adults protect the kids.”

Reindeer calf says, “He watches over me at night.” “The buck is always on the alert,” Nell said. “He will warn everybody if there’s any danger.” Nell said a lot of animal fathers are good parents.

“The male ostrich helps take care of the young,” she said. The male sea horse has an external pouch and he carries the eggs until they hatch, Nell said. “Then Dad looks after them.” 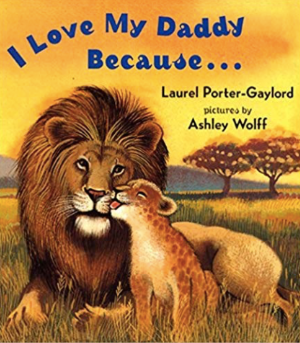 Back in the book, the man’s daughter, nestled in his arms, says, “I love my daddy and my daddy loves me.” So it is in the animal world. So it can be in the human world. Love your children. Read to them. Have them read I Love My Daddy Because… to you.

Then take them to the zoo. And say “Hello” to Nell.

(Originally published in “The Fourteen Percenter,” a newsletter for noncustodial parents, in 2002.