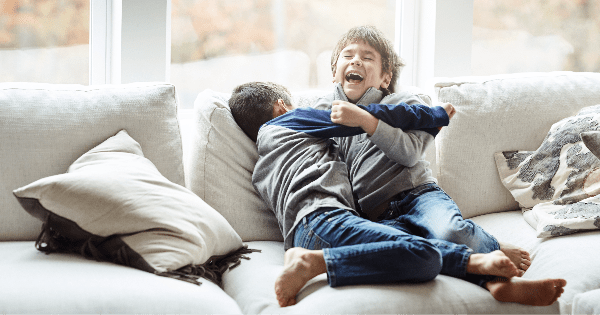 —
Dear Mr. Dad: My husband and our boy-girl twins love to wrestle, but I’m worried that all that physical activity and getting revved up will make them—especially our son—see violence as acceptable. Should I be concerned?

A: Not at all. In fact, the evidence supports the exact opposite conclusion. In their book, The Art of Roughhousing, Anthony DeBenedet and Larry Cohen write that roughhousing “makes kids smart, emotionally intelligent, lovable and likable, ethical, physically fit, and joyful.” Here’s how that works:

• Physical play teaches kids about morality, right and wrong, and following rules. John Snarey, who spent several decades studying fathers’ impact on their children, writes that children who roughhouse with their fathers “usually quickly learn that biting, kicking, and other forms of physical violence are not acceptable.” Those lessons help kids learn to read people and their reactions and teach them the difference between playful aggression and real aggression.

• Physical play teaches about how to treat others. As the grown-up, your husband could easily “win” every time he wrestles with the kids. But that wouldn’t be fun for anyone. So he’ll probably let them win once in a while (but not too often, because that wouldn’t be fun either). By doing that, he’s showing them that, as Uncle Ben told Peter Parker (before he became Spiderman), with great power comes great responsibility. In other words, when you’re bigger and stronger, you have an obligation to treat other people fairly and with compassion.

• Children who play with their fathers tend to be more helpful, cooperative, and likely to share. They also have better communication and leadership skills, according to pioneering fatherhood researcher Ross Parke.

• Parke and his colleagues also found that for girls, high levels of physical play are associated with such desirable social attributes as positive emotional expressiveness and clarity of communication, as well as originality, novelty, and creativity. Boys become more empathetic, more popular among their peers, and less likely to be hyperactive or sad.

• Roughhousing makes kids smarter. Kids who do it at home get better grades in school and do better on tests of memory and learning.

• Roughhousing helps kids learn to take risks and boosts resilience. In a safe play environment, kids get a chance to try out new things. They learn from their failures and successes what works and what doesn’t, and they apply those lessons to other areas of their life. Resilient children are more likely to see failure as a challenge and to try again, rather than give up.

• Physical play builds children’s—especially girls’—confidence, assertiveness, academic achievement, and increase the chances that they’ll stand up for their friends. Several studies of successful women have shown that almost all of them had fathers who engaged in a lot of physical play with them.

• Roughhousing is great exercise. This is particularly important since a majority of school districts have drastically reduced (or in some cases completely eliminated) recess in schools.

• Lack of rough-and-tumble play is associated with negative developmental, emotional, and physical problems, according to researchers Rafe Kelley and Beth Kelley. These include social isolation, aggressive behavior, depression, difficulty forming relationships with others, difficulty adapting to change, poor self-control. And researchers Stuart and Christopher Vaughan found that lack of childhood roughhousing was an accurate predictor of future risk of drug or alcohol addiction and criminal behavior in adulthood.

Sounds like roughhousing just about guarantees that your kids will grow up confident, strong, and smart, doesn’t it? Well, lots of physical play may increase the chances, but your husband should do more than wrestle or turn himself into a human jungle gym. He should also spend plenty of time talking, reading, teaching, changing diapers, and so on—and you should try a little wrestling too. Here are some basic guidelines:

• Safety first. Minimize injury risk by making sure you’re on a soft surface and far away from hard furniture, low ceilings, doorways, or anything else that could be a banging hazard.

• Don’t do it too close to bedtime. Rough play is a great way to tire out a child, especially one who’s been cooped up all day. But it can often get him or her even more wired.

• Don’t force your children to play. That can do more harm than good. Children whose fathers are overly “directive” (meaning they give too many commands) may become socially withdrawn, have fewer friends, are more likely to watch activities than get involved, and have more behavioral problems.

• Listen. When you’re playing with your children (especially when roughhousing), you should hear shrieks of laughter and happiness, not cries of pain or frustration.

FacebookTweetPinEmailShares108
wpDiscuz
0
0
Would love your thoughts, please comment.x
()
x
| Reply
Share this ArticleLike this article? Email it to a friend!
Email sent!