Get Daily Email
Join/Login CLOSE
Home / Featured Content / When Your Kids Talk About You—What Do You Hope They Say? Let’s Ask Dad 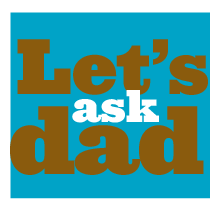 Did they listen? Will they later buck against the boundaries that you’re setting for them now and defame dear old dad? Will they fly with their own wings later on, remembering who lead them to the take-off site?

These are some of the sentiments we wonder about (and hope for) when thinking about what our children will say about us when they’re older.

In this installment of The Good Men Project‘s “Let’s Ask Dad” series, Ken Goldstein asks our panel about what they hope their children will remember them for and what they will reflect on when they are older and removed from a life so close to dad.

Our panel of writers and dads Kyle Lawrence, Will Klein, Asif Ahmed, Jared Mercier, and Thomas Olona recount the philosophies they instilled in their children, and the impression they hope they are leaving on them while raising kids for the first time, with or without partners, in light of how they were raised, and regarding the time they’ve put in, all the while wondering what part of growing up they will be fond of (or regret) the most.

What these dads have in common is a profound love for their children, deep reflection on the impact of their own fathers on their lives, humble concern about wanting to make consistently good choices for their children, and hope that their children will grow up resilient and caring in a world with unnerving obstacles at every stage of life.

“Let’s Ask Dad” is the conversation about fatherhood in the 21st century on The Good Men Project.

Ken Goldstein, The Good Men Project Board Member speaks to the experience:

“I sat in the studio and got to know each of these fine men through their detailed answers to our deceptively simple questions, I was struck by the commonality in their integrity, candor, introspection, and keen insights into the forever moments of parenting. Any single moment of a child’s development might or might not become a memory, but the memories each of these individuals recalled with resonance were as different as they were as human beings.”

Join us below in the comments, answering how you expect your child to remember you, and what they might be saying about you in the future. Add a personal note about remember your dad, and, as always, let’s have the conversation no one else is having about dads in the 21st century.

Watch these previous videos in the series:

What Do You Worry About In The Future When Your Children Are Adults?

What Advice Would You Give New Dads?

Describe Your Dad in a Sentence or Two

How Has the Word ‘Love’ Changed Now That You’re a Father?

What’s the Best Advice Your Father Ever Gave You?

What Was Expected and Unexpected About Fatherhood?

Well, I hope my boy (24 now) tells his friends that I listen to him, and mostly let him make his own decisions (always have, since he was 14) and that I have a sense of humor. It has worked ( I consistently won the ‘cool dad’ label when he was coming up, and his friend talk to me ‘like a bro.)’ But, they still show respect, never calling me by my name unless I tell them to, to this day.

Facebook60TweetPinEmailShares60
wpDiscuz
Share this ArticleLike this article? Email it to a friend!
Email sent!