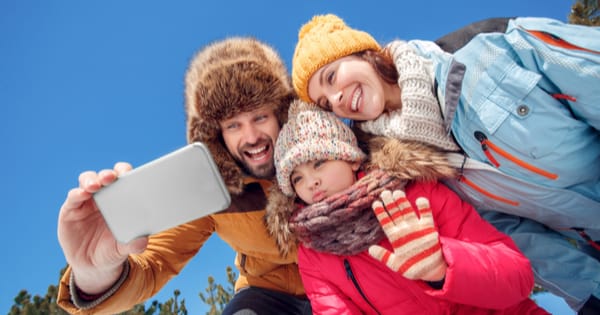 When I was 12, I gave myself bangs. It’s not as glamorous as it sounds and not something I recommend doing. Fortunately, it was the ’80s and I could blow-dry my bangs (really, my fringe) up, hairspray them to death, and fit right in.

When I was 16, some unknown allergen gave me a fat bottom lip at random times. The thing would puff and turn purple in the middle of conversation, making it hard to understand me. My mom and I couldn’t figure out what was causing it. Within a few months, the reaction mysteriously abated.

When I was in college, I brilliantly plucked out most of my eyebrows, convinced they were too thick and dark and manly-looking. My round face looked even rounder then, and my unframed eyes disappeared into slits. Thankfully, over time, they grew back.

Am I thankful that no friend has reached back through the years to post a photo of me with my lip bubbling up? You bet. Am I relieved Facebook wasn’t around back then to broadcast these less-than-great moments? Heck yes. Wouldn’t you be?

So why are we doing it to our kids?

There is a meme making the rounds on Facebook that reads (and I’m paraphrasing): if you grew up in the ’80s and earlier, aren’t you glad all that stuff you did couldn’t be posted on Facebook? So I ask myself, now that I’m 40 with two small children: don’t my kids, even as young as they are, deserve the same consideration?

My answer has evolved. When my son was born, I posted all manner of pictures of him on Facebook. His first bath. Him sleeping. Him in a tie-dye onesie. Him in a shirt with little boats on it. As he got older, I posted videos of him crawling up the stairs, humping his favorite stuffed animal, eating spaghetti for the first time.

I wanted to shout my newfound mamahood to the world. I wanted to capture every moment and then share it with Facebook.

I wasn’t alone. Take a look at your newsfeed. Undoubtedly you’ll see a whole host of pictures of friends’ little ones. Napping. In the dentist’s chair. In bed recovering from illness. You’ll probably also see status updates documenting yet another diaper rash, a meltdown, the mess made at breakfast, problems at school. After all, Facebook is a platform to keep loved ones updated, to show off accomplishments, to garner sympathy and support in times of need. Private information is made public and little lives are chronicled.

Two and a half years after my son, my daughter came along. While I announced her birth and posted her newborn photo, over time, I found myself not posting as many pictures of her. In fact, I became guarded about sharing much at all. This came as a surprise, this desire for discreetness. Was it because this was my second round of motherhood, and I didn’t feel the need to shout about it? Was it because she was a girl? And if so, didn’t my son deserve the same protection?

And, what if in sharing those precious moments on Facebook, I was also giving them away?

I have mom friends all over the spectrum. Some have never uttered their kids’ names online. They have explicitly told others they do not want them posting pictures taken at a birthday party or at a playdate. On the other end, many friends post photos and updates of every doctor visit, field trip, sick day, and more. Within these two extremes was a lesson of what kind of steward I want to be of my young kids’ online lives.

In this age of information overload, it speaks to issues of dignity and empowerment. My husband and I want our kids to be responsible individuals who feel in control of themselves. It’s the same reason we don’t force them to hug someone, the same reason we stop roughhousing with them when they tell us to. So who is giving us permission to give their information, let alone their privacy, away online?

Think about a child recovering from her first asthma attack, or his playing princess in his sister’s clothes. When I post about my child’s vulnerable moment, however scary or silly or memorable, it’s no longer just our moment. It becomes part of the Facebook machine. No longer do I have complete control over who sees it, who uses it and for what purpose, who judges it and how.

That time my newborn was readmitted to the hospital because of severe weight loss? A part of me wanted to post about it, get the support I desperately wanted, save some time by updating everyone at once. But it didn’t seem right; it was now his tiny life, his privacy that I had to consider. That picture I took of my son when he broke out in hives? Had I posted it, he undoubtedly would have gotten some well wishes, but when he gets older he might not appreciate others having had access to that moment in his life. That picture I took the other night of him and his sister in the bath? Adorbs. Was I going to post it? Absolutely not.

How would my child feel if she meets a stranger who knows most everything about her?

To be sure, I understand the need to reach out and share, to keep long-distance friends and family updated on our kids’ lives. Most of my family and close friends live across the country, a few across the world. I would love to brighten their day with a photo of my daughter’s tongue hanging out or my son playing tea. And I do acknowledge that Facebook is responsible for creating support networks that would otherwise not exist.

Sometimes it feels like a constant balance between wanting to foster community and simply oversharing. Before I post something, I look at things this way: will she appreciate this moment etched in digital memory forever? Might this embarrass him someday? Is there another way to reach out and build support? Despite its recent troubles, I don’t see Facebook going away anytime soon. But if not Facebook, some other social media platform will be there waiting, asking us to give our children’s dignity away in the name of sharing.

Our kids are growing up online. And we’re forcing them.

These days I want to simplify. I remember sharing pictures online in private photo albums. I remember calling friends and family to update them on a child’s injury, diagnosis, or a first date, and holiday cards being special because they contained pictures not previously posted. I look around and realize I’ve been too eager to casually share precious material, that I’ve traded intentional communication for tell-all sharing which, many times, results in less-than-mindful support in the form of quick comments and sad faces, all regarding information that’s not really mine to share in the first place.

When my son was born, I posted all manner of pictures of him on Facebook. I hope one day he forgives me my eagerness.