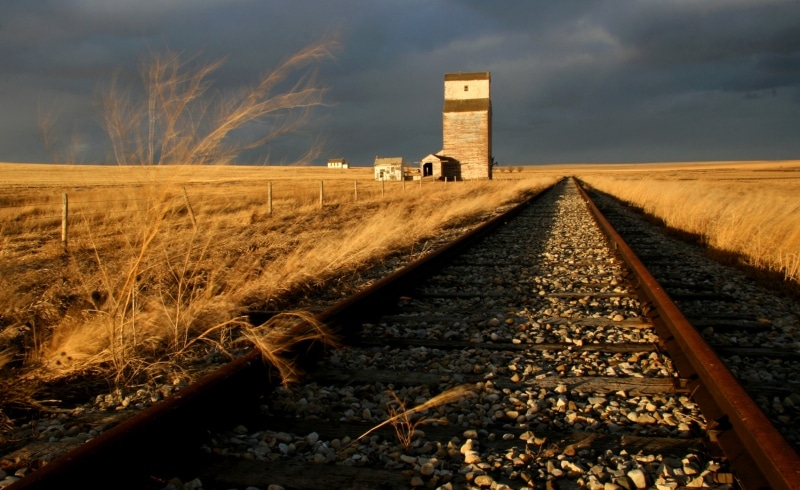 For those following the Canadian railway industry, 2020 was supposed to be a year of celebration. Canadian National Railway (CN), was continuing with its CN100 celebrations to commemorate the 100th anniversary of being bailed out and nationalized by the Canadian government in 1919 (it wasn’t privatized until 1995). The Canadian Pacific Railway (CPR) was to mark the 135th anniversary of the driving of last spike at Craigellachie, BC, on November 7th. The last spike was considered so monumental to Canada’s heritage that the Harper government officially declared November 7th to be National Railway Day beginning in 2010.

It seems almost cliché to say that 2020 has not gone to plan. COVID-19 shuttered CN’s celebrations and nobody is thinking much about the last spike these days. Large portions of Canada’s railway network were paralyzed in February by actions in solidarity with Wet’suwet’en land defenders. In BC, the Wet’suwet’en were attempting to block pipeline development on their territory and militarized occupation by the RCMP. The most notable of these solidarity blockades was on Tyendinaga Mohawk territory near Belleville, Ontario, and caused CN freight and VIA passenger rail traffic between Toronto, Montreal, and Ottawa to be disrupted for several weeks.

The decision to block railway tracks is deeply rooted in the history of colonialism in Canada. But rather than trying to understand this history, governments and industry across Canada clamped down. Alberta ultimately passed the Critical Infrastructure Defence Act, which made protests or actions that disrupted infrastructure like railways illegal, despite existing trespassing statutes already covering this. This speaks to the long-standing relationship between the Canadian state, railways, and the seizure of Indigenous land.

So why were railways chosen as sites of protest, and how does this relate to the November 7th anniversary? While some may celebrate the last spike as a symbol of the unification of Canada, the completion of the CPR marked a shift in the autonomy of First Nations, especially in Western Canada. As he explained in his recent book, Manu Karuka characterizes “railroad colonialism” as a distinct form of control where the existence of the track across the land is sufficient for colonial control. Karuka argues that our understanding of railway development in the 19th century is rooted in its economic motivations and impact, but that we ignore the colonial forces encouraging construction and the Indigenous forces resisting it.[1]

While the CPR is the figurehead for Canada’s railway lore, similar dynamics played out across Canada wherever railways were built. In my own research, the impact of railway development on Indigenous communities in Northern Ontario was slower (and definitely less legendary) than the CPR’s westward expansion. But the changes the Temiskaming & Northern Ontario Railway (T&NO) brought to the region were equally transformative. Begun by the Ontario government in 1902, the T&NO’s construction in the resource-rich region beyond North Bay was facilitated by treaty. South of Kirkland Lake, the 1850 Robinson-Huron Treaty was used to claim the right to build on the land. To the north, Treaty 9, one of the last (and most miserly) of the numbered treaties, was rushed through in 1905-06 to catch up with the pace of mining development the T&NO attracted to the region. Calls for Treaty 9 had actually begun in the late 1800s when Indigenous communities were struggling with the changes that construction of the CPR had brought to their territory. While it did provide minimal financial relief, Treaty 9 ultimately cleared the way for more encroachment on Indigenous territory, both by the T&NO and by resource extraction.

The T&NO reached Moosonee, 12 miles south of James Bay, in 1931. The Ontario government held its own last spike ceremony the following summer. The coming of the railway transformed settler-Indigenous relationships in the James Bay Lowlands by upsetting centuries-old trading and supply networks. Offering direct shipping from Southern Ontario in a matter of days, the T&NO usurped the Hudson’s Bay Company (HBC). As Brian Gettler has recently shown, the arrival of the T&NO in Moosonee marked the real transition of power in the region from the HBC to the federal and provincial governments. While the HBC remained active in the area, its influence was permanently weakened.[2]

The T&NO accelerated the consumption of alcohol and increased government scrutiny in the region by making it easier to reach. Moosonee was a true railway town, with the railway retaining ownership of most land in the community and acting as the de facto local government. The town’s first jail was a T&NO boxcar.In 1946, the T&NO was renamed the Ontario Northland (ONR) and took on the slogan “Ontario’s Development Road.” While this accurately described its mandate, the ONR failed to accomplish it in Moosonee. By the 1960s, the railway’s lax attitude to providing utilities caused a public health crisis with a growing Indigenous community on the outskirts of the townsite trying to survive next to raw sewage and without running water. When the Ontario government finally stepped in, the ONR officials were repeatedly reminded that they needed to work with the community, not treat it with indifference.

Since its arrival in the early 1930s, the railway in Moosonee was strongly tied to tourism and all its colonial implications. The ONR owned and operated a goose hunting camp at Hannah Bay which attracted the well-healed of both Bay Street and Wall Street to railway-organized hunting holidays with Indigenous guides. By the 1960s, the railway’s tourism portfolio expanded to include the famous Polar Bear Express, a day-trip excursion from Cochrane to Moosonee, which brought thousands of tourists to Moosonee each summer to see the province’s so-called frontier and to marvel at how engineering projects had reshaped the northern landscape on the way to Moosonee. This included photo stops at both the Otter Rapids hydro dam and at the Moose River railway bridge, construction of which had completely reshaped the Moose River channel. In Moosonee itself, visitors were encouraged to photograph Indigenous people and to buy their crafts. In later years, demonstrations of Indigenous culture and life became more important to the experience, but records suggest Indigenous people were rarely consulted on tourism development. In her interviews with Regina Flannery, Elder Ellen Smallboy felt the railway brought “curious and unwanted tourists” to Moosonee. “They look at us like we are dogs,” recalled Smallboy.[3] While tourism did provide a source of seasonal income, it also disrupted life as each train unleashed hundreds of tourists to roam around a town whose infrastructure could barely support its residents.

For most Canadians, what little they learned about railway development in Canada echoed Pierre Berton’s narrative of John A. Macdonald’s “National Dream” of a Canada united east to west by steel rails; a dream that was ultimately realized with the driving of the last spike of the CPR on November 7, 1885. Berton’s history of the CPR remains the most readable, but it has aged badly and makes for uncomfortable reading in places. While driven primarily by the capitalist motivations of railway men and political intrigue, Berton did not completely ignore Indigenous people. He talked about the transformation of Indigenous life that the CPR brought to the West, but his Indigenous characters play the clichéd role of a people fading away while the settlement of the Prairies moves forward.

The T&NO and the CPR stories have a lot in common. Before the railway, both Northern Ontario and the Prairies were Indigenous lands, contested sites of fur trade rivalries, and home to few settlers. Railways motivated the federal government to adopt the far more sweeping terms enshrined in the numbered treaties, which ostensibly forced the surrender of Aboriginal title in the name of infrastructure development, resource extraction, and agricultural settlement. The Crown was preoccupied with securing title, not with the living relationship inherent in treaty.

First Nations and Métis peoples resisting railway development, settlement, and the encroachment of the Canadian state are portrayed as key antagonists in Berton’s narrative. The uprising led by Louis Riel in 1885 is seen as a turning point for the CPR. What had been a financially crippled project helped to swiftly mobilize the militia sent by Ottawa to put down the uprising. Berton devotes dozens of pages to this movement of government force, so many in fact that the reader nearly forgets why the militia is heading west in the first place. According to Berton, “the frontier was melting away before the onslaught of steel” and Indigenous resistance became a thing of the past.[4]

But Berton was wrong. The completion of the CPR in 1885 didn’t end Indigenous resistance. While the 2020 blockades have received the most media attention, railway lines have also been blocked as part of Idle No More, many localized disputes, and even in relation to the Oka Crisis in 1990. The seizure of land for railway development has not been forgotten by contemporary Indigenous communities. Across the country, the history of railways needs to be understood as more than a story of development. Railways did not build a new world. Instead, they transformed an existing one and remain one of the most tangible symbols of colonial occupation. But because of this very symbolic power, and because their disruption garners widespread attention, railways also remain an important site of Indigenous resistance across Canada.

This post was previously published on activehistory.ca with permission with a Creative Commons Attribution-NoDerivatives 4.0 International License.