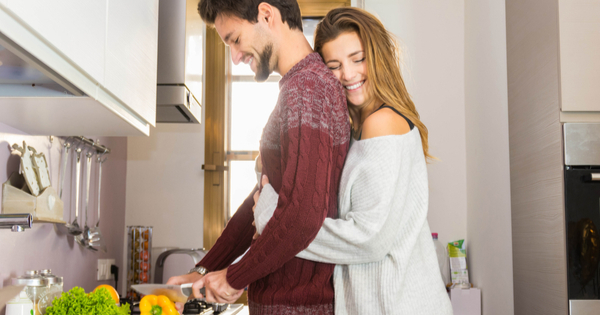 James Michael Sama knows that a few little changes can mean the world to the woman you love.

The small things you do for a woman are the ones that mean the most. Why? Because those are the things that show her you’re willing to put effort in for her, just because. No holiday or special occasion needed.

A good boyfriend or husband knows that any man who waits until Valentine’s day to romance the woman in his life is missing the point 364 days out of the year. He also understands that while grand romantic gestures are great, the thought put into everyday activities are even better.

Here are fifteen small things that actually have a big impact.

She’s told you about Susie at least 17 times since you’ve been together, not referring to her as “You know, that girl with the weird eyebrows” will let her know that you actually pay attention when she speaks – especially about things that may not involve you directly.

Clean up after yourself.

The cave men out there have given all of us guys the unjust reputation of being complete slobs. There are three possible scenarios here:

1: You have your own place which she visits, in which case she will appreciate you keeping it clean.

2: You share a place, in which case she will really appreciate you keeping it clean.

3: She has her own place and you spend time there, in which case it is imperative that you help keep it clean.

It’s not really that hard.

Actually tell her how you feel.

Men are notorious for not being open and honest about their feelings, and just like you tell women you’re not a mind-reader, neither are they. She will appreciate you respecting her enough to open up to her.

Don’t pressure her into anything.

Guilt trips are never cool, no matter how small the issue is.

“Are you really going to eat that?” “Are you sure you want another drink?” Yes, she is. And now she’s going to order two because of your stupid comment.

Don’t take forever to respond to her text.

You don’t have to be completely glued to your phone, but you probably are anyway. If she texts you, at least have the courtesy to text her back in a reasonable amount of time. It will show her that she is a priority to you even when you’re busy. It just takes a few seconds.

Watch what she wants to watch.

Maybe you couldn’t care less about the Real Housewives Of Beverly Hills, but being in a relationship isn’t always about only taking part in your own interests, it’s also about taking part in things that your partner enjoys, even if it’s not your favorite. Plus, you will get bonus points and probably get to pick the next movie you go see.

If you don’t already know how, learn at least one or two dishes to make for her now and then. It doesn’t have to be anything extravagant, and women think it’s sexy when you’re in the kitchen. Sounds like a win to me.

She’s had a long day. And even if she hasn’t, why would any guy complain about this? It’s an excuse to get physically close to her and make her feel relaxed. As if you needed an excuse for that, though.

Take her on a date.

It doesn’t matter how long you’ve been together, you should never stop dating. Whether it is out to dinner or a night on the town, it is important to not let things get stale. Give her a good reason to dress up and go out.

Whatever you’re getting, get her one too.

Going out to grab a coffee? Getting up to get some water? Don’t come back empty handed. Even though it’s something tiny, she will appreciate your thoughtfulness.

The only thing worse than a guy who doesn’t give her enough attention is a guy who gives her too much attention. Sometimes she just wants to read a book or watch a trashy TV show by herself. Respect her alone time, it will allow her to rest and reset, and she will love you for it (especially if she doesn’t have to ask).

Men are naturally problem solvers. When we hear about an issue we are compelled to attempt to come up with a suggestion or solution. When a woman vents to you, that’s not what she’s looking for. She wants you to simply listen and at least make an attempt to understand.

She doesn’t want you to give her the answer, but the support she needs to figure it out on her own.

Don’t talk badly about your ex(es).

Women understand that how you speak about those from your past is usually more of a reflection of you than it is of them. Someday, if your relationship ends, you are basically predicting to her how you’re going to talk to your friends or your next girlfriend about her. Not very reassuring.

Go shopping with her.

Dude, it’s Saturday, and you’re not doing anything anyway. If she wants to go to the mall, just go with her – but be in good spirits about it. I never understood why so many guys have a problem with this. You get to go and help her pick out clothing that makes her look sexy, and then you get to see her wear it later on, it’s a win win.

Just don’t be a downer while you’re there or it will do more harm than good. Oh, and offer to carry her bags. Just offer.

As Robert Brault said: Enjoy the little things, for one day you may look back and realize they were the big things.

Looking for the female POV to this article? Check out Joanna Schroeder’s 7 Little Things That’ll Mean a Hell of a Lot to Your Guy

Lel.
“Don’t pressure her into anything.”
“Watch what she wants to watch.”
“Go shopping with her.”

So dont pressure her into anything she does not want – But do watch Real Housewives, or another program most men cant stand. And pressure yourself into going shopping… Something most men,,, well you get the picture right…. hue hue.. 🙂

I gave her everything (except the massages ) even then she left me for a guy with Lambhorgini. Who might not do anything for her. Its all about money.

Some of the worst advice I have ever read. Advice for people who want to receive duty sex with one woman, once a month

Great list! I am not much of a TV watcher not a shopper, but your point about showing interest, giving space is very nice. I love watching football and going to the movies, but my boyfriend doesn’t. He obliges. I would add one thing to this list : Tell your significant other that she’s beautiful, he’s handsome, Sexy, etc. Being told I’m beautiful blows me away every time!

Actually, from personal experience most men I’ve slept with are not interested, nor comfortable with the woman swallowing. Let’s be honest: it tastes horrible. The texture is like eating snot. Most men are aware of this (a few of the guys told me they even tried their own once, just to see what the big deal was; they were disappointed). Some women enjoy swallowing. Find a lady that matches your sexual preference.

I hope you were being sarcastic…and if you weren’t then I feel sorry for any woman you are with. Your list objectifies women as sex objects.

So, if they aren’t just sex objects, what else to they bring to the table besides their pink hole?

Pull your own weight!! Don’t mooch, get an education and a job. Pretty basic you would think, but there are so many women out there who are the bread-winners, which is okay, until you split up and they want alimony and child support!! Women: prenuptial prenuptial prenuptial. Men these days are getting LAZY and don’t relate to the past generations of men who are actually providers for the family. I’m speaking from experience to watch your back. The second they claim they were laid off or want to be home with the kids, be skeptical. This could be their ticket… Read more »

Your post is pretty offensive to a man of “the current generation” who was raised on hard work and works 100-140 hours a week. She is out of state right now, so I took a job with long hours so I could save money for our future when she gets back. SOME men are lazy, just like some women. Your unfortunate experience does NOT speak for all of, or even most, men. And telling him you’re suspicious because he’s been laid off is the last I would want to hear. If I were laid off, I would be devastated, and… Read more »

Nailed it. Men are objectified as a utility in our society. Carly demonstrates the biologically and socially ingrained belief that a man does not deserve love if he does not provide. Some men simply don’t care any more and decide to be lazy. Most men are still stick on the provider treadmill. And many men, who are deeply driven with a purpose in the world, slave 100 hour weeks not out of necessity, but out of choice (e.g., entrepreneurs). Most women seem want a man who is BOTH a great provider and a great family man. That’s fine, but don’t… Read more »

Don’t forget to wear your skirt …

I really wouldn’t like a man to come shopping with me! What’s the point? You don’t have to do everything together, you can have your own hobbies and interests too. A good point I’d say though is if you’re both into partying and going out, do that together!

Thank you for sharing these thoughts. I wish that all men and women had such a positive attitude. They just might have better relationships with everyone.

You are spot on, Linda. This post was definitely for those healthy individuals who are looking for a healthy relationship or trying to make the most of their current relationship. Bottom line, if you’re with a person who continues to take from you and the relationship, while you do things from them and the relationship that are much like what is described in this article, maybe it’s not a relationship you should continue. we aren’t all meant to be with each other and on top of that, many of us have a lot of work to do on our personal… Read more »

some of the points are good but can’t even except the other points cuz they are just gonna spoil her and she is going to become a runaway train wreck destroying the relationship and even your life!!! now is that a good idea???

All except 15. Plenty of better stuff to do outdoors on a Saturday then spend time in a shopping centre! Surf, walk, run, anything.

Expert tip: Combine “Watch what she wants to watch.” with “Give her space.”.
i.e. Let her watch it even if its trashy, and go do something else. Make it the dishes and you will get even more brownie points for not watching something with her that you didn’t want to watch anyway (And the dishes really aren’t that hard anyway)… WINNER.

Guest
Lauren Elizabeth
Reply to  Will

You are literally a genius Will. Why can’t all men just think about the ROI on simple little things they can do to make an impact (women too obviously!)

FacebookTweetPinEmailShares32k
wpDiscuz
21
0
Would love your thoughts, please comment.x
()
x
| Reply
Share this ArticleLike this article? Email it to a friend!
Email sent!