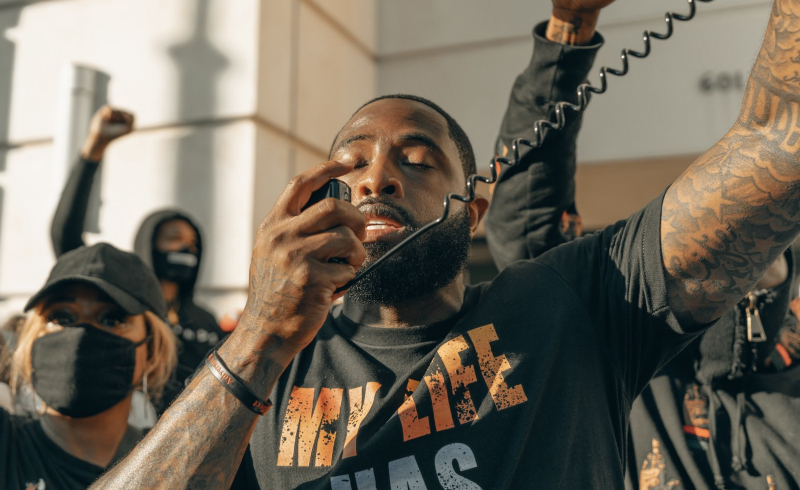 “If one really wishes to know how justice is administered in a country, one does not question the policemen, the lawyers, the judges, or the protected members of the middle class. One goes to the unprotected — those, precisely, who need the law’s protection most! — and listens to their testimony. Ask any Mexican, any Puerto Rican, any black man, any poor person — ask the wretched how they fare in the halls of justice, and then you will know, not whether or not the country is just, but whether or not it has any love for justice, or any concept of it.” — James Baldwin

Yesterday, I saw one of the gardening channels I follow on YouTube post a message in solidarity with the Black Lives Matter protesters. Today, I received an email from a ‘small business startup’ content creator that I subscribe to affirming their commitment to finding ways to address systemic racism. Since the tragic murder of George Floyd, I’ve seen this a lot of this on social media. Support, solidarity, and searching for what more one can do to address systemic racism and police violence.

While support for the black lives matter movement has been overwhelmingly positive, the president and his supporters are lashing out. They have taken aggressive action on peaceful protesters while using the platform of the president to spread misinformation. As much as the call for justice is and has to be in the streets, the fight to make black lives matter is very much about the media.

I’m an American. I’m not black. I don’t pretend to have some deep, intimate knowledge of police violence or systemic racism in America. I have, however, had some interesting experiences working on social justice issues in other countries, and hope that sharing what I’ve learned can be of service to the cause. So I’ve compiled a list of media strategies that make black lives matter.

It is for anyone and everyone involved in producing media, including journalists, bloggers, YouTubers, podcasters, and others. If you have a gardening show, a community of startup entrepreneurs, or anything like that, there is a lot you can do. And depending on what media platform you have, some points are more relevant than others.

Points are organized into the following themes:

1. Ensure black voices contribute to decision-making on what stories to cover and how they are framed

If you’re part of a larger media organization, you not only need black voices (and diversity in general) on your team, but also involved in making decisions on what stories to cover and how to frame them. If everything that happens is interpreted by an all-white team, you’ve got a problem. If you are a sole content creator or have a small team, don’t be afraid to reach out to friends and trusted acquaintances to ensure black voices are part of this process, however informal it may be.

2. Collaborate with black-led groups and organizations, and individuals working for change

There are lots of amazing black-led organizations, and many knowledgeable individuals that have been working to address police violence, structural racism, and associated issues for a very long time. Collaborate with them, support them, brainstorm ideas, work together.

3. Dive deep on the history, causes, and manifestations of police violence

There is an infinite number of angles that you can take on this. Explore deep-rooted issues associated with police violence and show how they affect black lives. Explore the systems and structures that create the conditions for heightened police violence against black people. Critically analyze our cultural norms and beliefs that uphold white supremacy within these systems. Draw connections between police violence against protesters and systems that support police officers to employ violence.

Police violence is not the only issue associated with systemic racism. Police violence is intricately linked to police militarization, mass incarceration, education, housing, economics, and other issues. Structural discrimination is expansive. Shining light on any element of it is productive.

5. Break down big issues into smaller issues, and cover those. You can make them relevant to your niche.

Police violence, militarization, and the like are complex issues. You don’t have to cover, or even understand every component of the issue. If an issue is overwhelming, break it down into a set of smaller issues. And cover those. Investigate what is going on in your city, on its police force. Illuminate one piece of the puzzle.

If you have a gardening YouTube channel, you can look into environmental justice issues and how they affect your city. If you create content for a community of startup entrepreneurs, you can explore challenges experienced by black-owned startups. If you have a niche community, make it relevant to your niche.

6. Be intentional about whose voices are elevated

7. Consider how you frame the protests

Shallow framing of the protests leads to a shallow understanding of them by consumers of your media. The protests did not happen in a vacuum. You should be sure to cover a range of contributing factors to the protests because you can expect that your media consumers will be coming from different backgrounds, experiences, and frames of understanding. Be explicit about your views. Don’t beat around the bush or avoid talking directly about sensitive issues. Speak from the heart.

8. Consider how you explain violence

9. Exposes lies, cover-ups, and those involved in them; but don’t let your storyline get hijacked

Trump is a master at hijacking the spotlight, and the position of the presidency provides him with a big microphone. While it is essential to build strong counter-narratives to expose the lies emanating from the White House, don’t lose focus on the issue at hand. Observe what is going on with these planned distractions, and explore what they don’t want you to cover.

10. Call out bigotry from those in positions of power and authority.

There is a tendency of many media outlets to beat around the bush on sensitive issues of racism. I see many expressing solidarities with protesters while keeping things vague on what is going on with police violence and associated issues. Don’t be afraid to call it like it is. Expose bigots in positions of power (at all levels) and those that pay lip service to white supremacist ideologies. Name names. Agitate.

Mainstream media will inevitably perpetuate common stereotypes that form misperceptions amongst the general public about what is going on. Take a critical perspective to mainstream reporting. Question everything and be quick to flag misrepresentations.

Take looting. Some media outlets became obsessed with looting and focused so much of their coverage on it. There formed a misperception that the widespread protests were violent and destructive. It was important to distinguish between the overwhelming majority of peaceful protesters, the few looters taking advantage of the situation, and then refocus the conversation on the core issue of why people are protesting. More examples are bound to come up moving forward.

There is a common tendency for persons of one nation or race to innately recognize the diversity of experiences and perspectives of people within their own group, while simultaneously failing to see that same kind of diversity in others. Don’t present the black experience as a single narrative. This only serves to reinforce stereotypes. Explore diverse experiences of persons in the black community. Helping others recognize that the black community is complex and multi-dimensional disrupts their ability to form stereotypes about black people, whatever they may be.

13. Share diverse perspectives, but only those that are constructive

If you are going to have constructive dialogue, to find solutions, or whatever, don’t be afraid to exclude those who don’t recognize the problem. I’ve watched a few panel discussions where, to ‘be objective,’ they included one hyper-conservative panelist who came ranting about the ‘rioters’ and ‘looting protesters,’ and wasting everybody’s time.

If a panelist rejects the premise that police violence is a problem, they need not be part of the conversation. Media objectivity doesn’t mean including bigots who talk smart. Bring in only panelists who have something valuable to offer to the conversation.

14. Create spaces for others; offer your own

Just because you have a media platform doesn’t automatically mean you have something valuable to contribute to the conversation. You may well do, even if what you contribute is demonstrating to other white people (if you are white) how to listen to and respect black people, but don’t assume so much. It may be of value just to offer up your platform to others, absent of your involvement. It’s got nothing to do with you. The issue at hand is more important. Think about it.

15. Explore issues with persons who have thoughtful commentary on the issue at hand. Use open-ended questions.

I saw one reporter going out and talking to protesters. He brings in a guy and starts asking him, “Do you think there is a problem with police violence?”, “Do you think racism is a problem?” and all this. The guy gives the general ‘yes’ and ‘no’ to each, then goes off on a tangent that had no relevance to why people are protesting.

16. Make sure stories and quotes are approved by the storyteller

I was talking to a friend who had survived police violence some years back and had been interviewed by lots of journalists about it since that time. She said she stopped doing interviews, in part because she’d been misquoted so many times, or used to support agendas she didn’t feel comfortable with. If you’re going to write someone else’s story, be sure they approve of the way you represent them before it’s published.

There are great moments of inspiration and progress happening all the time that we should pay attention to. Who is working towards a solution? What efforts are being made that are positive? Is anyone offering up new ideas? Look for opportunities to make progress and shine a spotlight on them. It might inspire other positive developments.

In times of great struggle, people are incredibly innovative. Look for people and groups that are doing things differently, trying something new. Innovation is something that, once known, spreads. When the D.C. mayor had the words “Black Lives Matter” painted in large yellow letters on the street leading up to the White House, it was quickly replicated in my home town, California’s state capitol.

19. Envision a better future and illuminate a path towards it.

Sometimes, the weight of the issues media outlets are covering can be discouraging, always talking about problems, problems, and more problems. Think about what you would like to see and figure out what the path to get there will look like. If you don’t know, you can make this a collaborative effort on air. Invite knowledgeable guests to a live brainstorming session for positive solutions, or ways to surmount specific challenges. This focuses peoples’ energy on positive solutions and can be a catalyst for change.

20. Create stories that unite people under a shared vision

Find ways you can build peace in the world around you. Download my free handout 198 Actions for Peace.