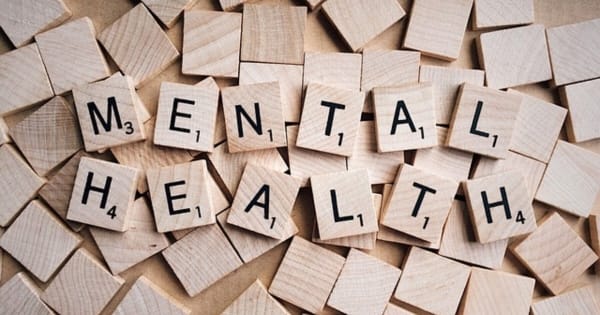 —
Let’s face it. We still have a long way to go when it comes to raising mental health awareness.

Mental health is a topic that is very much “in” right now if you are a movie star or a professional athlete, but that doesn’t always trickle down to the rest of us.

For us plebeians, common suffers of mental illness are we, daily conversations about mental health are a necessity.

For most humans, physical health comes up in conversation pretty much every single day, so why not mental health?

The answer is a stigma–that amorphous, dark cloud that hangs ever so ominously over our heads.

But it doesn’t need to be this way.

Stigma goes away when we talk about it. Stigma doesn’t like the light of our words.

Stigma, when all is said and done, is a coward.

This option is, arguably, the scariest.

But it’s the one I’ve found to be most rewarding. When I openly talk about my mental health, whether on Twitter, in the workplace, or at a public event, I give others permission to do the same.

There is almost nothing as powerful as the simple act of going first.

When you go first, you model the behavior you expect to see from others. Also, you tether others in your web of safety; you demonstrate that you are opening up a judgment-free zone.

2. Speaking of Twitter, did you know that it’s a fantastic place to open up about your mental health?

Did you know there is an entire, welcoming community already tweeting about mental health on a daily basis?

There are people of varying ethnicity, of all gender and sexual orientations, of narrow and broad identities, all talking about mental health.

It really is a beautiful thing.

I’ve seen people hiding behind the safety of a false Twitter persona open up and share their true selves over time. I’ve read tweets from doctors and nurses, students and lawyers, battle-hardened advocates and mental health warriors new to the scene.

And the best part?

All of these individuals have unique stories. No two stories are exactly the same. Sure, you can identify trends and start to spot common symptoms and diagnoses, but each story is made up of its beautiful idiosyncrasies.

3. You build up your courage by starting small.

Start by talking with a trusted friend or family member. Choose your favorite one. Choose someone you know won’t discredit you–or choose a person who, if they accidentally dismiss what you say, you know, deep down, treats you with the best of intentions.

These people are out there.

When I was first becoming a mental health advocate, I started small. I found the National Alliance on Mental Illness (NAMI), and I signed up to take a class. It was a course designed to help me better understand how to support a family member living through a mental health crisis.

In the process, I found my tribe, a community of mental health advocates who freely shared their experiences, all with a general willingness to be positive and helpful.

Find those people first–because once you’ve found your people, you’ll have the winds of the community at your back. You’ll have forward momentum.

Then, when you’re ready to ride the winds to find a path of your own, you’ll know that you can always go back to your community to recharge.

4. Or don’t speak at all. Write something.

For some people, having conversations about anything–let alone mental health–is a daunting proposition. Whether you’re an introvert (I’m an ambivert, so a part-time introvert) or you have social anxiety, or you just like being a hermit-crab-variety recluse, speaking in public about mental health is not going to be a natural and enjoyable experience.

So write something down instead. Write it for yourself at first. Write it on a plain old piece of paper.

What matters is that you write it.

Because writing changes how your mind works.

When you write something, you clarify your thinking. You also free up mental space by getting the words out of your head and onto the page. Like anything else in life, the more you write, the easier it will get.

called neurons, and as you perform the same tasks over and over, the neurons in your brain shoot electrical impulses to each other.

You can build this habit. You can write about mental health enough that it literally becomes part of who you are.

And it’s easier to talk about something when it becomes part of your identity.

5. When something is part of your identity, it is easier to talk about it.

Why do people love posting so much on social media platforms like Facebook and Instagram? No, it’s not because they are addicted by massive, super-evil corporations, although that could certainly be part of it.

It’s because we are humans–and humans love to express themselves. It’s part of who we are. We’re wired to communicate our thoughts, emotions, values, and customs to those who pass into our view.

We form our identities on the stuff of communication.

But, it’s important to note that there is a risk to doing this. And it’s why most people stick to posting “safe” things on social media, things that are guaranteed to get lots of “likes,” “retweets,” “hearts,” or whatever other newfangled status symbol the social media gods dream up next.

The risk of posting about your mental health identity is that there, inevitably, will be people who don’t like that identity–people who want to bring you down.

But this is the risk you run, and in my estimation, it’s a healthy risk.

Any rewarding pursuit involves its own risks.

I’ll leave you with an almost unbelievable story about an experience I had writing on Facebook about my newfound mental health identity.

Several years ago, I wrote a long Facebook post about some of my struggles with anxiety and depression. I had been volunteering as a mental health advocate for about a year. I had found my tribe. I had done the steps that served as a precursor for this moment.

So I posted something much longer–and much more vulnerable–than anything I usually saw on Facebook. I didn’t expect anything, I just wanted to share it and see what happened.
It felt good to get it all out. And then I waited.

Later that day, I saw I had a notification for a new Facebook message. It was from a friend who ran in the same social circles and was more an acquaintance than anything.

He told me that my story really meant a lot to him, and he asked me I would meet up with him to talk about mental health.

When we met up later that weekend, I could tell he was very nervous. He shifted his hands in his lap and stumbled over his first few words.

I immediately told him I would be happy to talk about anything he wanted to talk about, no judgment whatsoever.

What followed was a gushing of words. He told me about a history of panic attacks, information he hadn’t even shared with his best friend.

I felt very sad–sad because he never felt safe enough to share this, and sad that we live in a world that creates the dark cloud of stigma.

I validated absolutely everything he told me. I told him there was nothing to be ashamed of.

His entire body brightened almost instantly. The conversation soon shifted from his own story to an idea he had for a mental health nonprofit.

I told him it was a great idea–and that he should start it. A week later, he had

Today, that nonprofit funds mental health treatment for youth in Montana, and I sit on the board.

And it didn’t take much. I don’t feel I did much of anything at all. But I consistently come back to this as one of the most life-affirming moments I’ve ever experienced. I have goosebumps as I write this.

I found my tribe. I discovered who I am. I went first, and I continue to go first.

So that others may go first as well. So that we all can raise mental health awareness.

This post was previously published on Nerve 10 and is reprinted with permission from the author.

Jordan is a mental health advocate and social worker in Richmond, VA. He writes to inspire​ by making mental health more meaningful and accessible ​at www.nerve10.com--and is currently one of the top mental​ ​health​ ​writers on Medium.com. Jordan is also Head of Customer Happiness at www.getanswersnow.com, a startup that uses technology to change how parents of children with autism get support.

Facebook441Tweet1Pin1EmailShares443
wpDiscuz
0
0
Would love your thoughts, please comment.x
()
x
| Reply
Share this ArticleLike this article? Email it to a friend!
Email sent!