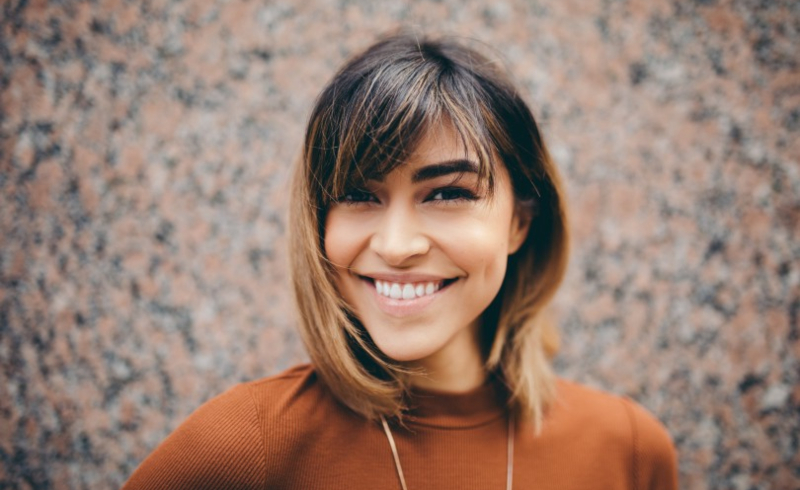 Looking around the party, I spotted my friend in the kitchen with her boyfriend getting another beer, and my other friend chatting with a guy in the living room. She was leaned against a wall, and he was leaning over her. I sighed and took a sip of my beer. Alone. Again, I thought.

A guy who was dating a friend of mine came over. “What are you doing alone?” he asked.

“You’re a pretty girl, but guys might be more willing to approach you if you smiled once in a while,” he said.

I scowled at him. Men tell this to women frequently, and it’s sexist and patronizing being told how our faces should look. But when you get down to the science, what those men are really saying is, “I would find you more attractive if you smiled.” Obviously, men still shouldn’t tell women how their faces should look, but it does give us some insight into what men find attractive.

A man isn’t going to approach you if he doesn’t find you physically attractive, so I won’t mention those here, but there are other qualities men find attractive that go beyond the physical.

In one study, the researchers found that happiness was actually “the most attractive female emotion expression.” When you smile and generally look happy, you seem more open to being approached and, in turn, less intimidating. Dudes are used to being rejected, so it helps if you look like you aren’t going to reject them immediately.

If I’m uncomfortable, yeah I’m not going to be all smily, but if I’m wanting to be approached, then I should look approachable. That was one of the big mistakes I made in my early 20s: assuming guys should overcome their fear of rejection to approach me, the scowly wallflower. Once the guy comes over, if I can keep being happy, that’s good for both of us too.

In one 2006 study, a sense of humor was important for both men and women, but in different ways. Women want a man who is funny, one who will try to make her laugh or lighten the mood. Men, on the other hand, want a woman who thinks they’re funny, someone who will laugh at their jokes.

If you like a guy, you’ll probably respond to his attempts at humor by laughing. Even if you find his jokes terrible, give him a break for trying and reward him with even just a polite laugh.

My husband keeps an ongoing collection of horrifyingly bad dad jokes, which sometimes I just roll my eyes at, but most of the time, I laugh at them, regardless of how unfunny they are. Just laughing a little bit helps us both feel good.

Have you ever heard a guy say, “I’m so into her because she’s a bitch!”? Probably not. Just like you wouldn’t want to date an asshole, guys probably don’t want to date one either.

Say “thank you,” listen attentively, don’t take others for granted, practice being selfless (which usually isn’t very hard for women). If you want a nice guy in your life, be who you want to attract. Kind people are attracted to like-minded people, and they’re turned off by nasty ninnies.

Be yourself. Don’t put on a facade and pretend you’re what you think a dude wants. Putting on a persona is exhausting, especially ones that require you to put your emotions in a box and hide them away. You hopefully want a long-term relationship, not one that is going to dissolve in a lot of resentment and bitterness. Most men want authenticity, and he won’t get that if you’re not being your true self.

Further, maybe cut back on the makeup. A study published in The Quarterly Journal of Experimental Psychology revealed that women tend to wear more makeup than men find attractive. Women think men like or find attractive a certain amount of makeup, so they end up applying way more than men think they should. Statistically speaking, less is more for men, and if you’re wearing too much, it can ward off men.

5. You take care of yourself.

I spent my early 20s looking for some kind of “forever” love, the one, a soulmate that I could just pour myself into. This love would make me okay. Happy. Loved. I was fucking insane.

Guys can spot a stage 5 clinger, and those are women who don’t take care of themselves. They haven’t developed their own friends, interests, and/or hobbies. They’re waiting for someone else to “complete” them without doing any work to being complete on their own.

You don’t want this to be you. It’s miserable and lonely. Learn how to be okay and even enjoy being alone. Eat healthy if you want. Exercise if you want. Find things that make you joyful, and do them as much as you can. Tell yourself the nice things you wish someone else would tell you. Be kind to yourself. It’s important, and you’re worth it.

This also applies to your emotional state. Do you take a long bubble bath when you’ve had a hard day, or do you scream at your cat or kids? Self-care work doesn’t stop when you’re single. It must be a daily practice because not only do you want a relationship, you want one to last. When you’re upset, figure out some healthy practices for yourself, and if you can’t, seek the help of a therapist.

If you keep striking out with guys, it could be because you’re choosing the wrong ones. What’s more likely, though, is that it’s something to do with you. Hopefully, with some little reminders, you can start doing something different and see where that takes you.