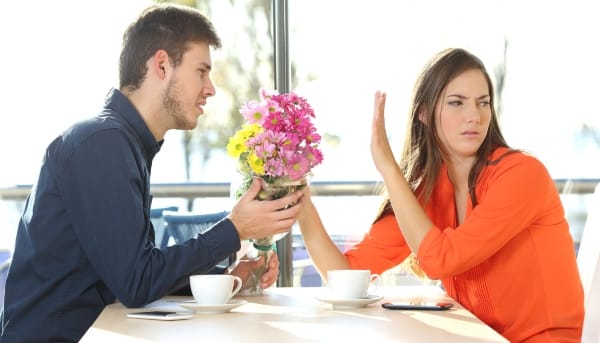 Forgiving others and yourself is infinitely terrifying yet necessary for achieving healthy relationships. It’s about being willing to acknowledge that you are capable of being wounded and able to risk exposing yourself. It also means that you’re stepping out of the role of a victim and taking charge of your life.

Forgiveness is one of the most misunderstood concepts, yet people often express clichés such as “forgive and forget” as if it’s an easy process. However, the importance of forgiveness takes on a new meaning after divorce because no one marries with the intent of divorcing so hurt and shame can run deep.

At times people equate forgiveness with weakness and it’s also widely believed that if you forgive someone you’re condoning their behavior. In my case, I held a grudge against my ex for many years and was unable to forgive him for his part in our divorce because it made me feel vulnerable to being hurt again.

But once I understood that it takes courage to forgive someone who you believe wronged you, and that it’s not about accepting, condoning, or excusing someone’s behavior, I was free to forgive my ex and myself for the pain we caused each other during our marriage and divorce.

What does forgiveness mean?

What does forgiveness really mean? Forgiving is one way of letting go of your baggage so that you can heal and move forward with your life. It’s about giving yourself, your children, and perhaps even your new partner, the kind of future you and they deserve – unhampered by hurt and recycled anger. It’s about choosing to live a life wherein others don’t have power over you and you’re not dominated by unresolved anger, bitterness, and resentment.

According to author Deborah Moskovitch, forgiveness is not letting someone off the hook. She writes: “Forgiveness is NOT the same as forgetting what happened, or condoning your ex-spouses actions, giving up claims to a fair settlement or reconciliation. While forgiveness may help others, it first and foremost can help you.”

What if I can’t forgive?

Many experts believe that forgiveness is a critical aspect of divorce recovery but that acceptance is a worthy option in cases where you’re not ready to forgive. In her groundbreaking book How Can I Forgive You? Janis Abrahms Spring, Ph.D. explains that acceptance is a responsible, authentic choice to an interpersonal injury when the offender won’t engage in the healing process by apologizing.

While Dr. Abrahams encourages readers to muster up the courage to forgive others who have wronged them, she also says that forgiveness that’s not genuine is “cheap” – so not worth much. She writes, “For those of you who have been wronged, I encourage you to take care of yourself, be fair, and seek life-serving ways to cleanse your wound.” She suggests that while genuine forgiveness is a worthwhile goal, acceptance is the middle ground between unforgivable hurt and cheap forgiveness.

There are many reasons why people have difficulty letting go of the past and reversing the painful consequences of their past, writes Dr. Fred Luskin in his acclaimed book Forgive For Good. He points out that people may take on the pain of others’ mistakes because they take their offenses personally.

Dr. Luskin believes that individuals heal best when they react as if the injury happened to a close friend. He posits that when people create a grievance story which focuses on their suffering and assigns blame, their suffering is magnified.

Luskin writes, “Forgiveness is not a focus on what happened in the past and neither is it remaining upset or holding onto grudges. You may have been hurt in the past, but you are upset today. Both forgiveness and grievances are experiences that you have in the present.”

One of the biggest problems with ongoing resentment in post-divorce relationships is that it often leads to withdrawal and poor communication. And if you’re bottling up feelings of anger, sadness, or disappointment often, this can lead to feelings of resentment.

If your feelings of resentment toward your ex are persistent, it can cause you to hold a grudge which is usually deep seated and often the result of an injury or insult that has occurred. People hold grudges due to both real and fancied wrong doing. Either way, the bitterness that comes with a grudge – even if understandable – comes with a price. Studies show that letting hostility fester can lead to depression, anxiety, cardiovascular issues, immune system problems, and higher risk of stroke.

7 steps to forgiving your ex:

Practicing forgiveness allows you to turn the corner from feeling like a victim to becoming a more empowered person. Experts believe that forgiving an ex can allow you to break the cycle of pain, move on with your life, and to embrace healthier relationships after divorce. However, forgiveness takes time and has a lot to do with letting go of those things you have no control over.

Follow Terry Gaspard on Twitter, Facebook, and movingpastdivorce.com. Terry’s book Daughters of Divorce: Overcome the Legacy of Your Parents’ Breakup and Enjoy a Happy, Long-Lasting Relationship is available at many outlets and bookstores.

Terry’s new book “The Remarriage Manual: How to Make Everything Work Better the Second Time Around” will be published by Sounds True in February of 2010 and you can pre-order here.

A version of this post was previously published on movingpastdivorce.com and is republished here with permission from the author.

Terry Gaspard MSW, LICSW is a therapist, author, and college instructor. Two of Terry’s research studies have been published in the Journal of Divorce and Remarriage. She is a contributor to Huffington Post, The Thought Catalog, The Gottman Institute Relationship Blog, DivorcedMoms.com, and DivorceMagazine.com. Follow Terry on Twitter, Facebook, and movingpastdivorce.com. Terry’s award winning book "Daughters of Divorce: Overcome the Legacy of Your Parents’ Breakup and Enjoy A Happy, Long-Lasting Relationship" was published in January of 2016 by Sourcebooks. Terry's second book, The Remarriage Manual: How to Make Everything Work Better the Second Time Around will be published by Sounds True in the spring of 2020.

END_OF_DOCUMENT_TOKEN_TO_BE_REPLACED

Facebook26Tweet1PinEmail2Shares29
wpDiscuz
Share this ArticleLike this article? Email it to a friend!
Email sent!