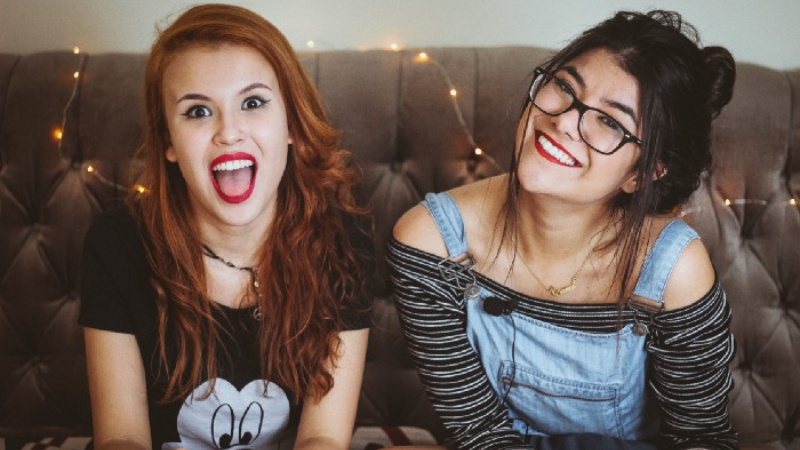 Disclaimer: I use the term “teens” in a pretty broad general sense in this article, which I know is a stereotypical statement to make. So understand that I don’t believe that all teens can be put under this one blanket statement. What I’m doing here is explaining that often many young people learn in different ways than what we as adults continue to try to shove down their throats.

As a teen, I never spit in the faces of those elders who tried to give me advice because I’ve always been very aware of hygiene practices. However, I did turn my nose up to pretty much anything that anyone tried to tell me, ever.

I figured that these adults in my life didn’t seem all that put together, so what the heck gave them the right to tell me how to live my life? I was doing just fine with my soggy-hemmed bellbottom jeans and bright yellow walkman.

It actually felt like one of the worst things ever to have to endure an I-know-more-than-you type lecture from anyone who thought they had more life experience than me. So I did what any self-respecting teenager would do, I half-heartedly listened to their “advice” then did the exact opposite.

Here are eight pieces of advice that I poo-pooed because I was smarter than everyone.

My dad had this habit of drinking a few too many beers on a Friday night, starting a fire in the pit out back, and gathering the family around a raging blaze for some familial bonding time. I never minded this because if he felt particularly generous, he’d give me a beer to nurse while he told me all of the great lessons I was to know for my life ahead. The most important being, “The Golden Rule,” Otherwise known as treating others the way you want to be treated.

I wish I could tell you that I wholeheartedly ate this advice up the way I slurped the beers that Dad smuggled me on those cold September nights, but that would be a damn lie. I was a teenager! I didn’t know how I wanted to be treated. I was a jerk to everyone because everyone seemed like they were a jerk to me.

Telling teens that they need to treat others the way they want to be treated is redundant because they don’t care.

Rather than giving a teenager a step by step tutorial on how to be a good person, show them by example. Treat them like a valued member of society. Give them responsibility and independence. STOP GOING THROUGH THEIR PHONES! Give them praise. Don’t tell them how to live their lives and instead start showing them how to live life well through example.

“Learn to talk with people.”

Most teens are pretty awkward by nature. They are going through some pretty heavy stuff in those brains and bodies, and often they can’t make heads or tails of it. Asking young people to now go out into the world, a world they are already anxious about, and talk to all the people is a fool’s errand.

Ask young people questions about themselves. It doesn’t matter who you are. If someone shows interest in something you are interested in, you will open up. We love talking about ourselves and our passions. And that is the first step in learning how to be a great conversationalist.

When I was a teen, I toggled between “I am the greatest human on the planet” and “I’m a big fat bag of shit” on a minute by minute basis. The smallest insecurity set me off.

Now I watch my pre-teen son, Lars, and I wonder how that kid has so much confidence. Last year for a talent show his school was putting on, he decided to enrol himself and do stand-up comedy.

He had nothing rehearsed and basically winged the entire performance by interacting with the audiences and using physical comedy to get people’s energy up. By the end of his set, he had the entire auditorium laughing.

I loved the idea of being in front of a crowd as a teen, but my insecurities stopped me from doing anything like what my son had done at the talent show. What if people laughed at me, or worse yet, what if people didn’t laugh at all?

So it begs the question, how has this kid gained for much self-love that he can muster up the kind of confidence it takes to potentially make a fool of himself in front of a bunch of strangers?

From the time my kids were tiny children, I’d always tell them stories. Not stories about princesses or knights in shining armour, but embarrassing AF stories about the life and times of me.

They loved hearing about my life, especially when the stories involved them as babies and how much they made my life a living hell in those first few sleepless months of motherhood.

Like all adolescents, my kids have moments of self-doubt and insecurity, but we try to nip it right in the butt before it grows into something direr. I’m far from a perfect mother, but I know how much insecurity can negatively impact a person’s life, so I try to stay on top of those types of issues regularly.

When you see a kid speaking negatively about themselves, tell them about your own experiences. Learn to laugh at your own mistakes to show your child; it’s okay not to be perfect. Guide the topic of conversation away from them because, honestly, it’s good for young people to stop thinking about themselves for a few minutes every once in a while.

“Stop being so impulsive.”

Stop projecting on the teens in your life and let them be impulsive while they still can. Allowing impulsivity in life gives them the opportunity to deal with consequences that may have never come up if they had always taken the “safe route.”

Cause and effect is an important life lesson in a young person’s development. We cannot shield them from every potential danger, or they will never learn how to conquer the tough things in life.

“Stop comparing your body to those around you.”

How does one stop comparing themselves to others? That is the ultimate question. I remember being the weird, chubby drama kid in high school and looking at the volleyball girls with admiration. With their tall, svelte bodies and long blond ponytails, I knew I’d never look like them, but that didn’t stop me from unhealthily pining.

It is hard not to compare yourself and your achievements to those of your peers. It’s difficult for me as a 30 something, so how can we tell our teens to do just that?

Compliment, praise and give positive feedback. When we build our kids up in their confidence, they will have less need to pine after the qualities they see in others.

Another gem of old Dadio’s. He was always on my case as a teen about how I had to be accountable for my actions. One time he caught my friend and me out behind the grain silo, smoking a fat J and giggling about the weird way our social studies teacher said Perestroika.

Dad lost his mind, understandably, and grounded me for two weeks. Drugs are bad, kids, and when we do bad things, the consequences hammer down on us. He was adamant that I understand the importance of accountability. I would take my punishment and not complain because I was in the wrong.

I don’t actually recommend doing anything differently. Accountability is a virtue that too many people lack. Teach ’em young, and hopefully, it will stick.

When we are young, we feel like time is the only thing that is endless. 30-year-olds look ancient to us, and by our approximation, we will never be old enough to have wrinkles or an RRSP. When we lecture our youngins on time management’s importance, it literally goes in one ear and out the other.

Time is not a precious resource because time is meaningless to someone who assumes they have their entire life ahead of them.

Talk in a very foreboding and melancholy way about how time has slipped away from you, and thirty years passed by in the blink of an eye. This will either scare the bejesus out of your young friends and at least get them thinking about the passage of time, or it will give them something to giggle about while they’re out behind the grain silo smoking e-cigarettes and pondering life.

This isn’t a foolproof guide by any means on how to talk with teens. Adolescents are a preternaturally fickle species that change perspectives on an hour by hours basis. When hanging out with people who are 20 years your junior, the main thing to remember is that they are humans. You don’t like it when that barista from Starbucks talks down to you in that holier than thou voice just because you didn’t know what venti meant, so why do it to someone else?

Be cool, make friends and try to give your teen some meaningful knowledge without coming off like too much of a total know-it-all.