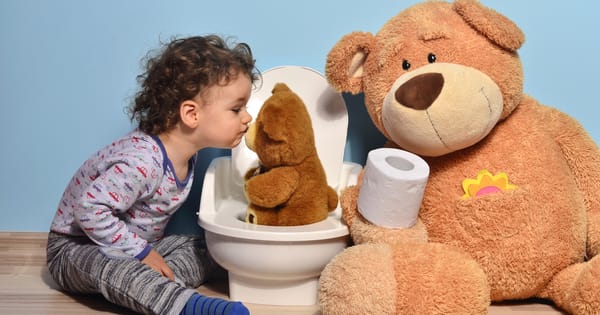 I’m amazed at what I’ve found myself saying since my son became a toddler.

For anyone not in the know, during the toddler years (usually between 1 and 3 (ish)) the child becomes a kind of Tasmanian Devil, seemingly created for one function and one function alone: to drive their poor, sleep-deprived, parents to despair.

Here’s a selection of phrases I’ve had to say to my son more often than I’d care to admit:

1: Daddy (or Mummy) is not a climbing frame

Some days I go to bed covered in bruises, looking like someone who’s stepped into the ring with… whatever boxer is fashionable right now (like I have the time to keep up). My son sees me as a combination of a Jungle Gym and… and another Jungle Gym.

I am jumped on, prodded, climbed over, kicked and sat on (usually all of the above take place before breakfast). The other day I lifted my son from a merry-go-round and was given a swift kick in the privates for my troubles.

They didn’t talk about being beaten up by a toddler in those antenatal classes we took… I wonder if this was a deliberate omission?

2: The toilet is not a drum

Toddlers seem to be gifted with the uncanny ability to find the most unsavory, least hygienic, object in the room and obsess over it. They’ll rub it, stick their heads into it or rub their dummy all over it (before happily returning the pacifier to their mouth) – seemingly in an effort to aid the transfer of 1001 unknown germs.

Whenever I get into the shower, my son makes a bee-line for the toilet and bangs the lid like a drum. The loo, which he’s helpfully named ‘Daddy’s Toilet’ (as if I spend long enough on there for it to be inextricably linked with me), is beaten within an inch of its life. All the while I stand in the shower imploring: “Please leave the loo alone! It’s not a drum” I am always ignored until, covered in suds, I stumble from the shower to stop him, at which point (in my son’s mind) a game begins and he charges off around the room.

Perhaps the little one thinks it’s ‘Daddy’s Toilet’ because that’s where I sit, in despair, begging him to calm down so I can continue my (much-needed) shower?

This I just don’t get. If I present an item to my son, on his favorite plate, there’s a 50/50 chance of his eating it. If, however, I get the same item and throw it on the floor… 100% certain he’ll pick it up and munch away happily.

For some reason, toddlers want to put everything in their mouths. So any walk in the park, a trip across town or visit to the supermarket is perpetually punctuated with me saying: “Take that out of your mouth! We don’t eat off the floor”.

Leaves, rocks, bits of twig, squashed chips & a whole assortment of litter have all been whisked from his grubby little mitts just before he attempted to eat them. If I’m honest, there have been several times when I didn’t get there quickly enough – so these items have had to be wrestled from between stubbornly closed lips. He, of course, thinks this is hilarious – while all I can think of is a potential night of projectile vomiting should he catch some lurgy or other.

Apparently, I used to eat mud when I was a tot. I don’t know whether I should find this reassuring or not?

I went through a period when I was genuinely worried that my son might think his name was ‘Put that down!’ I’ve said it to him so often!

I don’t know how he does it.

I spend (seemingly) hours removing all potentially hazardous items from any environment he enters, yet, no matter what I do, a 6th sense seems to kick in and in a matter of seconds he’s found the rusty pair of garden shears from behind the sofa or a fully working guillotine under the coffee table (OK – so I’m exaggerating here – we don’t have a coffee table).

I don’t know when this desire to turn every afternoon of play into a death-defying stunt will end. But I’m counting the minutes…

What is it about grandmothers that little boys find so amusing?

Mine loves his granny wholeheartedly, yet can’t quite stop himself from using her as a bouncy castle. The combination of an overly excited (and increasingly heavy) tot with overly forgiving (and increasingly break-able) grandmother is not a good one.

“That as it may be, I’d still prefer he stopped.”

“But he’s bouncing on your head.”

I know that ‘boys will be boys’ (sadly) but it’s not easy trying to instill in small people the idea of being gentle when the people who they should be gentle with are acting like they’ve just signed up for Wrestlemania.

6: Nobody wants to see your tummy!

My son has just (and I mean very recently) discovered his tummy. I don’t know what he thought was in his stomach region before he made this discovery, but that doesn’t seem to matter. He now shows his tummy to everything and everyone at every given occasion.

“Do you want to water the flowers?”

“The flowers don’t want to see your tummy…”

This is followed by a quizzical look that says: “Of course the flowers want to see my tummy! Who wouldn’t?”

I find the current tummy fixation quite amusing, but am trying to nip the whole thing in the bud as I’m aware that it’s likely to be replaced with other body parts!

7: “No Peppa Pig until you’ve eaten your sausages.”

How much TV a child should watch is an often fraught and much-debated topic (see here for my thoughts). That said, I recently found myself telling my son that he couldn’t watch Peppa Pig until he’d finished eating his sausages.

Of course, the irony was completely lost on him, but I found myself in near hysterics – a strange place to be when it’s just you, a tot and plate of bangers.

I couldn’t help but wish that he was off to watch Bambi, as I love a bit of venison.

What do you have to say your tots too often? Let me know!

Parents, I salute you!

Originally published on Out of Depth Dad