—
Periods of calm followed by an onslaught of turbulence, in whiplash fashion, adversely impacts those caught within the family court system as it often churns like a hurricane over parents and children — leaving a wake of devastated lives, denied liberties and seized property that put many in a place where weathering such conditions become a lifestyle set in constant survival mode.

Subversion of Due Process

Transcribed in the fifth and fourteenth amendments of the United States Constitution it is stated that no person shall be deprived of their life, liberty and property without being afforded due process.

Due process is often subverted for many individuals in divorce and custody ordeals — often for reasons of players in the court covering up one track after another in situations where transgressions have transpired both on procedural and substantive grounds whereby established precedents and rules have been disregarded — resulting in rights being terminated without parties being afforded proper adjudication.

These matters that find due process has been denied often can be identified going hand-in-hand with overt impropriety.

The advent of technology and information being readily available at the fingertips of many good, fit and able parents has yielded some hard truths (and hard evidence) leaving many dumbfounded at discoveries made in regards to those players and entities involved in matters — revealing much more than the appearance of impropriety, favoritism and bias coming from the bench but also pointing out the collusion likely transpiring among the close-knit relationships that exist between players within the family law industry.

The Requirements of Due Process

Requirements of due process afford a person the right to impartial and fair tribunals — something that is often absent in many family court situations. One common area is those situations in which people receive protective orders during the course of these ordeals.

While the genuine intent of protective orders is to offer various forms of protection for men and women — often times mothers and fathers are served such papers in the course of family law matters as part of a litany of unethical tactics being used by those who would profit off gaming the system.

Often these orders are given out by courts on the basis of hearsay and enforced without the receiving party present or able to respond, thus depriving them of certain liberties and tainting the very direction of a case from its outset. Such actions often ensure that any civil discourse that would appeal to amenable outcomes for both parties involved is derailed — much to the delight of those seeking to benefit (by the billable hour) off of continued conflict. 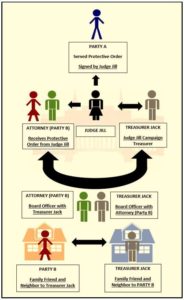 Illustration and Example of Impropriety and Subversion of Due Process Playing Out“Whatever disagreement there may be as to the scope of the phrase ’due process of law’ there can be no doubt that it embraces the fundamental conception of a fair trial, with opportunity to be heard.” —OLIVER WENDELL HOLMES JR., UNITED STATES SUPREME COURT JUSTICE

On any given day it is tough for most people who enter into the family law arena to endure the whirlwind of dysfunction and greed that tends to rain down on so many mothers and fathers. Now imagine you have served your country and have become disabled as a result and rely upon compensation benefits from the Department of Veterans Affairs (VA) as your main source for subsistence — targeted by opposing parties in divorce and custody ordeals.

“Disabled Veterans are encountering tremendous financial and emotional distress in various forms on a regular basis because of this injustice. Some to the point of suicide…other sufferings include illegal garnishment of entire bank accounts, inappropriate liens on personal property acquired with Title 38 compensation, driver license suspension, and even incarceration. Tragically, many are denied a meaningful relationship with their child(ren) as a result.” —LT(J.G.) GREGORY PARSONS, U.S. NAVY, PDRL

In the summer of 2015, a disabled naval officer, Greg Parsons co-founded the Disabled Vet Child Support Info Facebook group with fellow veteran Yann Iannucci. After having spent several years communicating with veterans spread out across the country, Parsons discovered hundreds of situations where due process had not been afforded to people regarding their disability compensation benefits awarded during divorce and/or child support establishment hearings.

In commenting on this affront to due process in such situations Parsons explained,

“Most are never afforded a proper VA Apportionment claim submission by the state for proper jurisdictional determination of financial support for their dependent(s) from their VA disability award — despite the long-standing 1998 Federal Office of Child Support Enforcement (OCSE) Information Memorandum 98-03 instructions for filing VA Form 21-0788 in accordance with the Veterans’Judicial Review Act of 1988.”

In response to the problem, Parsons developed the “Parsons Due Process Affidavit (PDPA)”, in the form of a Microsoft Word Template allowing a process in which an individual can fill in personal details and conform it to their own case. The template is copyrighted and available by contacting the group through its Facebook site and for those that do not use Facebook, the group can be contacted via its website. Once completed and put on record with the court the affidavit asserts all federal civil rights (often unconstitutionally excluded from some state’s family law code) be afforded to that veteran. The group shares the successful commentary from those that have been helped and shares several redacted versions of those court orders with positive results — successfully safeguarding a large portion, if not all, of these benefits from being pillaged by the system.

The right to fairness and protections within our judicial system is paramount for cases that unfold within family courts — without due process afforded to those that traverse these ordeals — the integrity of our Constitutional rights as mothers, fathers — people — will be at stake.
__

Do you want to be part of ending sexism, racism, and homophobia?

It is a broken system. Dealt with it for 11 years now and with 7 to go I can only hope to break through the corruption of Clearfield County Court and have all my garnished VA disability returned to me from the Domestic relations department and hopefully have the case manager put in jail for contempt of court as I was once, when I wasn’t and another time when I was but that was to him back dating my support after increasing it putting me over a grand in the rears. Stressed out, irate and disappointed with the whole ordeal.… Read more »

All courts are far worse than you can imagine: Join us Thurs Nite LIVE: Who Judges the Judges with Katherine Hine hosting writer, artist, and activist Susan Wells Vaughan to discuss THE GOVERNMENT’S TRAFFICKING IN OUR CHILDREN. North Carolina public employees have been targeting Vaughan, her adult daughter and her grandson since 2013. State court judges, intent on destroying families and collecting federal program dollars by doing so, allow CPS, APS, and other state agencies to ignore the Constitution and their own statutes by kidnapping children from loving families for profit. Judges are even being tutored in how to remove… Read more »

Facebook190TweetPin1EmailShares191
wpDiscuz
Share this ArticleLike this article? Email it to a friend!
Email sent!