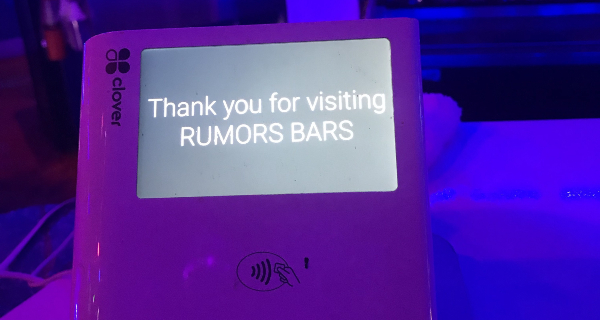 We are in Rumors sitting at the bar waiting for a drag show to start. Of the eight people there, three hours before the show, we are the only cis gender women.

We had tried the bar next door, but they were showing the UFO fight. Bar patrons were divided between 21-year-old girls loudly celebrating their legality by falling down or hanging onto each other, and testosterone-driven fight aficionados. We tried to order wine at the third level of the three-level bar, only to be told that we would have to order that downstairs.

Downstairs we were told that yes they had wine, but someone would have to go upstairs to the bar we had just left to get a wine bottle opener. We eased away when one of the bar tenders fought his way through the crowd to go upstairs for the opener.

At Rumors, in contrast to fighting our way to the bar through a sea of drunks cheering on their chosen gladiator, we were able to walk right up and sit down. The very attractive male, presumably gay, bartender brought our wines immediately, even though they were from the little bottles you can buy at your local 7–11 for a pittance. Still, it was wine and we were the only ones on our side of the bar at 9:30 at night. The show wouldn’t start until 11:00.

We set about making friends with the bartenders and door guy, one of our best skills, honed when we were younger and felt safer when we knew somebody. They assured us the place would fill up with around 200 people by showtime. They were telling the truth.

People of all genders, sexual preferences, ethnicities and ages started trickling in. I was undoubtedly the oldest person there, which is never a liability for me. I’m always down for a good time. My friend Terrence says, “You take Carol (cisgender and straightish) to a gay bar, and she will find someone she knows.”

We didn’t know anyone at Rumors in Galveston, Texas, that is unless you count the people we met while there.

Including a man who sat next to my sister. He asked if he could hang out with us, so it wouldn’t look like he was alone. We said yes. His name is Don. He was a nice looking man, dressed in a polo shirt, jeans and a white ball cap. He told my sister he had been married 21 years, was now single, had four children and ten grandchildren. While we were in a gay bar, I figured my sister had gotten lucky. He gave us dollar bills to tip the performers once the show started, and broke the ice by tipping them first.

The performers were gorgeous and variously talented. One did high kicks over her head, and then hit the floor so hard in a split that a guy next to me said, “That hurt me.” That same guy, with dreadlocks and dressed all in black, had made room for me around the performance area and thrown his arm around my neck. There didn’t seem to be any strangers in this place.

Another performer was one of our bar tenders. She had real, paid for, large breasts, and what may have been butt implants. Bought or not, she had a great shape, and was a sweetheart to us at the bar. At one point she told my sister, “I can’t stop sweating.” My sister said, “It’s the hormones, honey.” They both laughed. I would have thought she was transgender, but she was participating in a drag queen show. So who knows? We didn’t ask.

The first performer said, “I’m not a woman, or transgender. I’m a drag queen.”

In fact, the show was a fund raiser for three of them to travel to Chicago to compete in a national drag show competition.

As the night progressed, we tipped the performers, danced with lots of people, and had a blast. Between performances, everyone danced with everyone. One guy, cis gender appearing, but again I didn’t ask, danced dirty with me on “Back That Ass Up.” Does his not getting an erection while my ass was in his crotch mean anything?

My sister danced to almost every song, but our single guy friend, Don, stayed seated at the bar. Between dance songs and performances, he told us there is a thriving gay community in Galveston. He appeared to equally flirt subtly with my sister and a cute, young guy who hovered in our area, smiling at us three.

We never did find out anything more about Don, who sat all night with us, and who didn’t seem to know anyone else there. We left right after the second show which started at 12:30. My sister ran back in briefly to give him our raffle ticket since we wouldn’t be there to win. They didn’t exchange numbers, so I’m guessing he is someone who decided later in life to come out of the closet and be true to himself, but is a little shy or nervous.

What we did find out was that, in that bar, in that town, everyone was nice to everyone. Everyone was welcoming to everyone. There were no distinctions based on gender or sexual preference at all. There was no ageism. No one wore name tags with the labels gay, lesbian, trans, bi, queer, heterosexual, heteroflexible, pansexual, cis gender, other gendered, or non-binary. We were all humans having a marvelous human time with each other.

The joke is on those who don’t accept people in all their incarnations.

It’s good that we now have identity words to fit most of us. But it’s even better to be surrounded by people who simply accept you as you, with no need for labels. That kind of camaraderie is special and rare.