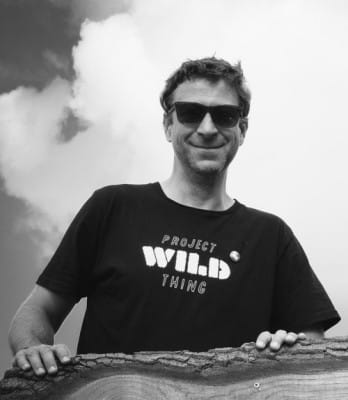 Tom Farrand has made collaboration a career. After 15 years of corporate branding and marketing he had an epiphany on a plane. Afterwards, he helped to start Good for Nothing, now a global movement of creativity for good and runs the Swarm partnership, helping organisations solve tough challenges through collaboration. He lives in a village with his wife, a daughter of 8 and 5-year-old boy and girl twins. Follow him on twitter — @tomfarrand.

What does it mean to be a dad?

Being there, being present as much as you can, particularly while they’re younger — I’ve got a really deep sense that that’s important. Being someone they can learn from, a role model, a benchmark or a guiding point for their future lives. Not in a heroic way, but they mimic you the whole time. What you do they do, what you say they say, you have a massive influence.Being a dad is about unconditional love, but sometimes putting down boundaries. That’s a really tough one, knowing when to let things run, self-organise, versus when to intervene.

How has it changed your outlook on life?

I think like many young dads, when my first arrived I was just in bits, like what just happened?! But then oh my goodness, here’s a beautiful tiny living person, we’re parents. It was an amazing fantastic feeling, but I was terrified too. There’s no training manual.

“Six weeks after our first was born, I worked in corporate branding, I was on the plane to New York, three glasses of wines in and I watched an Inconvenient Truth. All of a sudden I didn’t want to be where I was.”

I was thinking ‘what am I doing in a system that’s actually damaging the world?’ Never mind conservation and protection, it’s actually going to be very dangerous to be in this world we’re creating. I think a lot of these thoughts came about because I was a dad.

It’s a cliché, but I think about when they’re old enough to ask ‘what do you do?’ in the context of the world ‘created for them. I have to say, ‘we’re burning the planet, we’re making people really unhappy, giving people less opportunity in the future, because of some highly damaging things we do now’. Some of those actions are quite unconscious for so many people but we’re still doing it.

You naturally, or I did, try and shift your whole orientation towards trying to do something about it. In the early days of this realisation, it’s ‘oh my god there’s all these huge problems in the world, what am I going to do?’ It’s by actually doing things you work it out.

What are the toughest things?

The constant one is what’s the world going to be like in 20–30 years time? Where jobs are hard to come by, skills are hard to acquire, there’s loads of pressure on kids.

With education, I was very lucky because the system rewarded what I was good at. I took a fairly traditional path and it was only when I’d been working for 15 years, I realised I’d basically been asleep. That world doesn’t make you ask any questions, pass an exam and its fine. Who knows what the world is going to be like for our kids?

I also worry about what all the screen time might be doing to their heads. They’re growing up in a really different world from my childhood, and I worry about not understanding what it’s like.

What do you want to look back on and be proud of?

More than anything I want my kids to be happy. I want them to have rich, happy, fulfilling, rewarding lives and relationships. I hope they’ll have spent enough time around me to know that you can choose your path — you don’t have to go down the traditional route.

“There aren’t any benchmarks for knowing if what you’re doing is right, which is tough.”

What’s right and wrong in the world is a conversation that people don’t really have. But you have these conversations with your kids all the time, because they’re trying to work out where the boundaries are, what’s right and what’s wrong. It’s going to sound a bit nuts, but I was talking to my 5 year girl old about Arctic drilling, which went like this:

“There are these big companies who want to make holes in the Arctic to get oil out.” I said.

She said “why do they want to get the oil out?”

“They believe we need more oil to power our countries and its worth a lot of money.” I said and talked about how burning oil puts more carbon dioxide in the atmosphere and creates climate change. We’ve had that whole discussion before so she gets it.

She looked at me quizzically and said “That’s really simple, they shouldn’t be allowed to do it.” Then she said, “why do they actually want to hurt people?”

“It’s a really good question, I don’t think they think about it like that, but in the long term it is going to hurt people, it’s going to change their lives. I certainly won’t work with them.” I said.

It’s good to ask questions like that, you do get into issues of morality with your children. Having these kinds of conversations is uncomfortable, but it’s important because it’s their world we’re creating.

What keeps you on track?

It’s about trying to make sure I’ve spent enough time with each of them, on their own terms. You’ve got to be quite disciplined. I’m constantly struggling to manage my own work with my time and their time.

The thing that’s really influencing me at the moment is all the rewilding stuff. Getting kids outside. When I was a kid we were outside all the time in East Africa. I can’t give my kids that right now, but I take them out on Owl-prowls and Dawn-raids to try and make it sound exciting enough to get out the door. Generally what I’ve found is physically getting them out the door is a major barrier — there’s a screen and it’s warm. Once you’re out, it’s great. I’ve found I don’t need to guide anything. They’ll create a game or make a thing. I can either join in or leave them to it. Quite often I leave them to it, because it’s great for them to be playing independently.

“I take them out on Owl-prowls and Dawn-raids to try and make it sound exciting enough to get out the door.”

It’s fascinating to understand what your kids love versus what you think they love, so we do this really interesting thing sitting around the dinner table. You ask one person ‘what’s your best thing today?’ Everyone goes around the table and asks questions like why was that your best thing? What was great about it? We do it on and off. It’s really good because they come out with really interesting things.

It’s the little moments that stick in their head. My son’s is standing on the edge of a cliff when we were camping, looking down over the sea. I remember it actually, but for me there was nothing particularly remarkable, but for him, it was a time he was really happy, which is cool. What counts is you’re having a conversation about what’s positive and powerful. It’s definitely not the stuff you’ve got on camera, it’s not obvious. That’s why it’s interesting.

If you found that helpful, subscribe for email updates for new interviews and more detailed insights on what it means to be a dad and how to be a better one.

This post was previously published on Being Dads and is republished here with permission from the author.

Facebook9Tweet1PinEmail1Shares11
wpDiscuz
0
0
Would love your thoughts, please comment.x
()
x
| Reply
Share this ArticleLike this article? Email it to a friend!
Email sent!