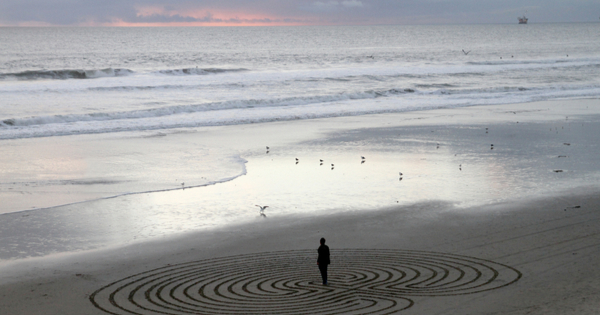 I never thought of myself as a Labyrinth kind of guy.

For those of you not familiar with a labyrinth, let me take a brief moment to explain. You’ve likely seen photos of them, perhaps you’ve even passed by one. They are more common than you think. They are also quite ancient, and in recent years have experienced a bit of a resurgence. Early versions of Labyrinths appeared in ancient Egypt and Greece thousands of years BCE. They’ve also been found in India as well as Europe. This online article (link here) gives you a nice historical summary. Note: If you do a Google search you are likely to find images and links to the 1986 movie starring David Bowie. I’m not sure of the connection to what I’m describing here.

A labyrinth looks like a maze, and there is some connection between the two. The difference is that a maze is intended to lock you in, confuse you and make it difficult to escape. A labyrinth has one entrance and one exit, usually, it’s the same way you entered. In other words, retrace your steps and you return to where you began.

As a part of my training program in Spiritual Direction with the Hadden Institute I spent an evening with Rev Lauren Artress, an Episcopal Priest, author and principal founder of the movement establishing labyrinths throughout North America and beyond. I confess to entering the evening in a spirit of significant distraction as the events in Washington DC occupied my mind. Nevertheless, I listened and engaged as best I could.

In the middle of her presentation, something jumped out at me. Lauren honestly reflected on her own challenges with traditional forms of prayer. Sitting and reading prayers just didn’t work for her, she needed to be in motion.  My ears perked up. I could relate as I’ve written about in my recent book Everyday Spirituality. She went on to describe walking in a labyrinth as a way of practicing walking prayer.

Hmmm, I thought.  I should try this out. Using the online tool Labyrinth Locator (link here) I discovered there was a small one located within ten minutes of my house. Despite the cold day, I made it to the church where a Labyrinth occupies a part of its grounds. Lauren had advised that we simply experiment, walk in, see what happens, do it several times. I followed those directions and added the form of prayer I describe in my chapter “breathe” which I learned from Richard Rohr.  For roughly 20 minutes, I walked into the labyrinth followed the path to the center, paused, closed my eyes. I continued the breathing prayer and repeating the word “Yahweh”. Obviously, I often became distracted, my mind rushing off to tasks, people and errands. But I just come back around and around.

After several entrances and exits, at a moment I was about to just give up and say “ok, enough, I’ve got to go” I reached the center again.  I closed my eyes but this time I decided or something in me decided to slowly spin around.  There in the center of the labyrinth with my eyes closed I rotated fairly slowly.

Because of the time of day and the winter light, the sun was low in the sky and to the east. As I rotated I could sense the warmer light to one side and the darker cooler shadows to the other as I rotated. All the time my eyes were closed. Something spurred me on to continue. I gradually had the sensation of being a part of the rotation of the earth with the sun setting, this moved to the seasons of the year and next the earth within the solar system. Was fully conscious and could even hear a dog bark on a street nearby, yet I was simultaneously aware of a vast interconnectedness of time and space. What Richard Rohr has described as the Universal Christ, and St. Paul captured in parts of his letter to the Colossians.

Eventually, the reality of cold temperatures and a sense that I had been given what I needed prompted me to eventually pause myself as this twirling compass, this modern slow-motion swirling dervish, walk out of the labyrinth and off to the grocery store.

We all need to find spiritual practices that will give us resilience in these most challenging times. It can also be the calm we need to help us return to the action that’s needed for the healing of our broken world. Looks like the Labyrinth might be a practice for me.