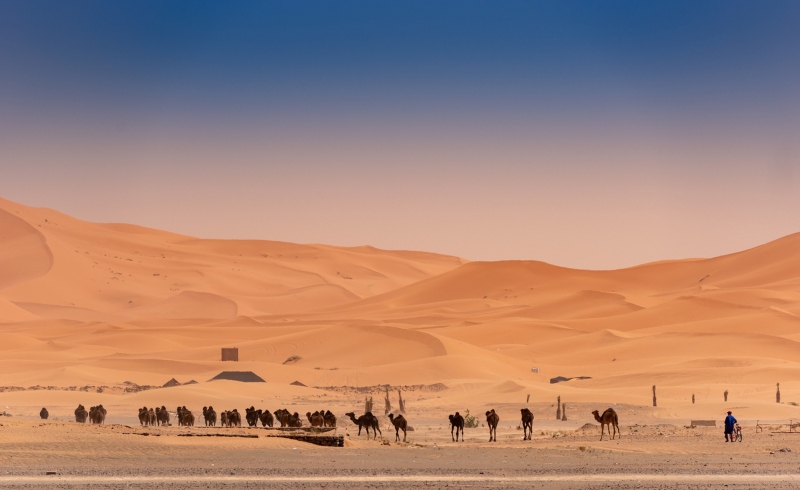 A hot desert wind is carrying a massive cloud of Saharan dust into the southern United States this week. Dust plumes from the Sahara routinely blow westward across the Atlantic at this time of year, but this event is a doozy – by some measures, the biggest in decades. And a second plume appears to be forming about a week behind the big one.

Across the southeastern U.S., from the Gulf Coast to the Carolinas and potentially as far north as Indianapolis and Cincinnati, dust effects will likely be visible in the coming days. Trillions of dust grains will reflect sunlight in every direction, creating milky white skies. The dusty haze reflects some sunshine back to space, cooling the surface a bit where the plume is thickest.

Longer waves of red and orange light tend to penetrate the dusty haze, so sunrises and sunsets are likely to be especially beautiful. On the downside, where the plume mingles with showers or thunderstorms, downdrafts may carry desert dust to Earth’s surface. This will impair air quality and could trigger allergic reactions and asthma attacks. The more dust reaches an area, the more pronounced the effects will be.

For atmospheric scientists like me, this huge dust plume is more than a cool event – it also shows how the Earth’s physical geography creates weather and climate patterns. Here’s what causes these plumes to form.

Our planet’s climate and weather systems start with motion in the atmosphere – swaths of air rising and falling, or moving horizontally from high-pressure areas to low-pressure areas.

Earth’s rotation and the fact that the planet is warmer near the equator than at the poles create circulation patterns in the atmosphere. At higher latitudes, toward the poles, winds blow faster and move from west to east. Near the equator, winds blow more slowly and travel from east to west. These are the trade winds that blew ships toward the New World during the age of exploration.

In the deep tropics, rising air expands and cools. The water vapor in it condenses and falls, producing rainforests that are the most productive ecosystems on the planet in the Amazon, the Congo, parts of Southeast Asia, Indonesia and the Philippines.

In the subtropics of both hemispheres, sinking air compresses and warms, vaporizing every little wisp of cloud to produce the world’s arid regions: the Gobi, Atacama, Sonoran, Namib and Australian deserts. The largest desert is the belt of searing aridity that stretches across the Sahara and Arabian Peninsula and reaches deep into Central Asia. This is where trans-Atlantic dust plumes form.

The Sahara is so hot and dry that North Africa is hotter than the equator at this time of year, although it lies thousands of miles farther north. This is the only place on the planet where the gradient of hot to cold runs backward – from the subtropics to the equator.

In the space of 1,000 miles, from the Atlantic coast of Ghana to the deep interior of Mali, the landscape changes from dripping jungle to searing sand. Evaporation keeps the rainforests cooler than the deserts to their north. This reversed thermal gradient affects the predominant trade winds, causing them to undulate back and forth and up and down in gigantic easterly waves from June through October.

The combination of a huge expanse of roasted land and an upside-down thermal pattern allows billows of high wind to free sand and dust from the Sahara’s hot surface, lofting it high on buoyant thermals and carrying it far to the west. As the air acquires a heavier and heavier burden of dust, it becomes even more erosive, sandblasting the arid landscape ever more thoroughly.

The largest dust plumes are ejected westward across the tropical Atlantic. Much of this desert dust is deposited in the ocean, but some of it reaches the Americas.

Over the ocean, African easterly waves gobble up water vapor from the warm sea surface and can blow up into tropical storms. Nearly all Atlantic hurricanes start out as undulating breezes over the reversed thermal regime of West Africa.

Big Saharan dust plumes interfere with the formation of Atlantic hurricanes in at least three ways. First, their very dry air dilutes the humidity whose condensation forms the fuel of tropical storms. Second, upper-level winds that carry these plumes blow more strongly than winds at the surface. This variation in wind speed, known as wind shear, blows the tops off of thunderstorms before they can become organized into bigger systems. Third, dust plumes reflect and scatter tropical sunlight, reducing the tropical sun’s evaporating power and starving storms of their moisture.

For all of these reasons, tropical depressions, storms and hurricanes are less likely when big Saharan dust plumes are active over the Atlantic. That’s good news for coastal residents in the U.S. but bad news for surfers, since tropical storms are the main generators of waves in summer.

And dust plumes provide other benefits. Desert dust is an important source of nutrients for downwind ecosystems, both in the ocean and on land. Soluble iron in the dust helps some species of algae in surface waters to thrive. These tiny organisms form the foundation of food webs that sustain thousands of other species.

The dust also contains phosphorus, which is critical to the growth of tropical forests in Central and South America. These rich ecosystems get some phosphorus by dissolving local rocks at their roots but need more, which they receive from desert dust wafted thousands of miles westward by African easterly waves.

If you’re in an area affected by a dust plume, don’t forget to look up. You may see odd-looking skies or stunning sunsets, created by interlocking chains of cause and effect that link vast regions on both sides of the tropical Atlantic and sweep us into the drama of our spinning planet.