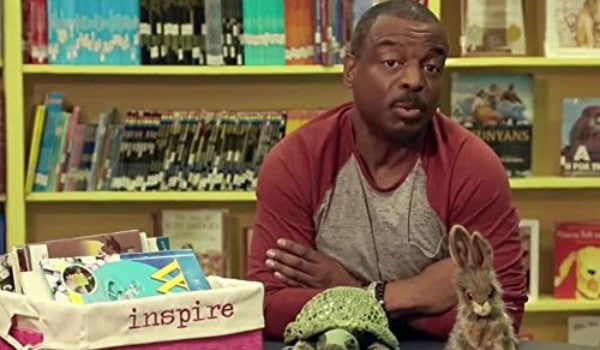 This June the city of Sacramento announced it was renaming a Meadowview-area park after favorite son LeVar Burton. That same week a Facebook “memory” popped up on my screen. In 2014 I had posted 6 little words: LeVar Burton Will You Marry Me?

Amused by the coincidence (though slightly creeped out by the algorithm), I shared this memory on my Timeline along with the comment, I have no idea why I wrote this, but who doesn’t love LeVar? Many friends agreed with me; they “liked” and commented. It was cute.

The next morning I woke up to an actual memory screaming in my head—my 4 year- old son shouting “LeVALL! I want LeVALL!” (at that age, he wasn’t so good with the “r” sound), and me scrambling to find YouTube videos of old Reading Rainbow episodes on my laptop while dumping yogurt and fruit onto his dinner plate, so both of us could achieve some measure of calm. While my kid spent his evening hours with his favorite guy, I too would sink into a blessed oblivion of watching LeVar and his T.V. pals sing about teamwork and busy bees and Abiyoyo.

The Abiyoyo episode was our favorite. LeVar’s guest was Pete Seeger who read and sang his book based on an old South African lullaby about a father and son, who are reviled outcasts until the day the horrible giant, Abiyoyo (“he had slobbery teeth ‘cause he didn’t brush ‘em!”) attacks their village. Suddenly the boy’s extremely annoying habit of constantly strumming his ukulele proves to be a stellar gift as his music inspires the beast to dance himself into exhaustion. With Abiyoyo collapsed on the ground, the magician father’s heretofore infuriating pranks—making things disappear with a wave of his magic wand—save the day as he zaps the monster into oblivion.

The townspeople welcome them back into the fold (“Bring your darn ukulele, we don’t care anymore!”). We bought the book and read it every day.

“It’s perfectly understandable that he would be obsessed with that story,” my son’s therapist assured me. “Death is absurd. One day we are here and the next day we’ve disappeared. And then, of course, it’s a story of a father and son. It’s his love for this man, LeVar Burton. It’s the father thing.”

Right. The father thing. Until that moment, I hadn’t really worried about the father thing because he’d always had two mommies; me, and his other mommy who was the best mommy in the world.

I couldn’t imagine any kid needing a father when he had a mother who made his baby food from scratch every morning and spent afternoons building him a teepee or composing songs for him on her autoharp or creating his scarecrow costume for Halloween. She taught him how to kick a soccer ball. She bought him a tool kit and a trumpet. And she had recently disappeared.

“Bebe could do everything,” my son said to me a few weeks after we lost her, “What can YOU do?”

After a ten-month struggle with uterine cancer, his “Bebe,” my wife of 14 years, died on May 15th, 2012—two days after Mother’s Day, which was the day I let him climb up on her hospital bed with his toy doctor kit to “make her all better.”

The approximately 24 months between my wife’s death and my social media marriage proposal to Mr. Burton are a blur, but I do remember having vivid fantasies of LeVar Burton not just entertaining my kid from the now-ubiquitous screen (forgive me Bebe!), but of actually… crazily…kind of co-parenting with me. I wondered about his life outside the show.

Did he read when he got home from filming a show about reading? Did he cook the recipes he tried on the show? Did he dance with his own kids? Did he even have kids?

I pictured him with my kid; teaching him how to throw a baseball while I napped under a tree (napping was a big feature of my fantasy world), taking him to work and showing him around the set, cooking with him, giving him a snuggle when he was scared.

And then, (oh Lord!) fantasy-LeVar started giving me a snuggle and… other stuff. Sexy stuff.

I was so sad and he was so lovely, with his kind eyes and his strong arms. When Reading Rainbow first came on the air, LeVar was practically a kid himself. Watching him bop around in ‘80’s neon chic with the likes of Kermit the Frog, inspired nothing more in me than the desire to make him cookies.

But the show ran for two decades. He aged into everything a husband and father should be: he had gravitas and humor, good looks and good intentions. And by introducing kids to books about the vast spectrum of humanity, he was also teaching them empathy. Empathy is very freakin’ attractive.

My son’s therapist kindly reassured me that this was quite normal. These are actually the things most people fantasize about; sex, companionship, and comfort. “But I would encourage you,” she suggested, “to figure out what it is about this person in particular that inspires you.”

Was it the father thing for me too? Did LeVar remind me of my father? My father sure did love to read. He was reading Tolkien to me before I even entered kindergarten. He spent years reading and talking about Moby Dick. He cried when we read Laura Ingalls Wilder. Every room in our house was full of books.

In the end, I do believe it was about the books. Books had saved me from loneliness in my own childhood and they helped me save my son’s as well. LeVar inspired us both to get out of the house and over to the library. We read a lot about loss and grieving, but soon moved on to all kinds of new material. I probably bought him way too many books, but he always read them, asked me to read them, talked about them, acted them out for me, and asked questions. He learned to look into his own heart and out into the vast world for answers.

Today we are lucky. We joyfully cohabitate with my new spouse (and old friend), who is teaching him chess and hiking, table manners and resilience. Both husband and son have kind eyes. Both are strong.

It’s weird, though, how I still kind of want to marry LeVar Burton.

I think Bebe would understand. She totally got the whole LeVar thing. In the months before she died, she worked as an Associate Director on a Broadway show called Leap of Faith. During rehearsal breaks, she was making our boy a collage of everything she could think of that he loved. As she glue-sticked an image from Reading Rainbow into the center of the crowded poster board, the ensemble dancers gathered around her and cheered, “LeVar! We love LeVar!”

I mean, who doesn’t love LeVar?

Gretchen M. Michelfeld is an eclectic writer, a hopeful feminist, a sheepish Mets fan and a proud mom. Her award-winning feature film AS GOOD AS YOU is available on Amazon Prime, EPIX, and iTunes. https://www.gretchenmmichelfeld.com/

Thank you for this. Love your sense of humor! Wonderful.

END_OF_DOCUMENT_TOKEN_TO_BE_REPLACED

Facebook198Tweet5Pin1EmailShares204
wpDiscuz
Share this ArticleLike this article? Email it to a friend!
Email sent!