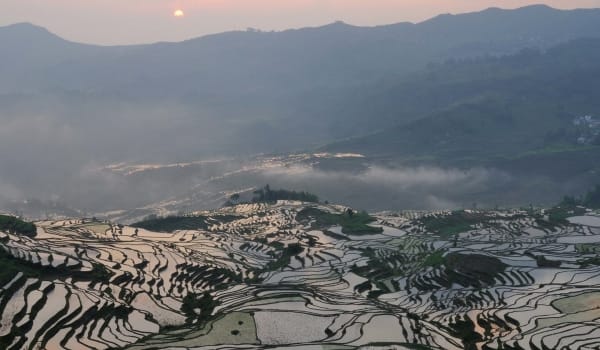 Welcome to the Landscape News bi-weekly digest on landscapes, climate and sustainability. From what’s on your shelves to what’s in the atmosphere, here’s the news to know.

We can have our meat and eat it too, in a sense, by consuming more lab-perfected vegetable-based protein.

Indigenous Peoples Day was 9 August. We pulled from the archives our top 10 stories, poems, interviews and more. We investigated their ancient technologies that are currently helping our future. We made you a quiz.

On social, in the news or in the streets, here are five youth activists to follow.

CLIMATE: Not our best report card

The latest IPCC report on climate change and land was first leaked and then released 8 August, filling headlines worldwide. Its main takeaway is that an impending food crisis awaits if we don’t change our approach to the 72 percent of all land we currently use.

Case study: as the atmospheric carbon dioxide concentration continues to go up, the nutritional value of staple foods such as rice goes down.

After a summer of record-breaking heatwaves, it’s no surprise that Europeans are more worried more about climate change than the economy or terrorism.

Europe’s hot air also made its way up to Greenland, melting its ice sheet into waterfalls at near-record levels.

Personal data qualms aside, if you order a Google product – phones, speakers, laptops – you can sleep peacefully knowing that its journey to you was carbon-neutral. By 2022, the company will make every product in part from recycled plastic.

Volvo is also helping customers’ consciences stay clear by using blockchains to trace the cobalt used in its electric cars. If the mineral isn’t conflict- and child labor–free, it’s not going for a ride.

And while e-scooters might seem responsible, researchers found that their manufacturing process makes them less environmentally friendly than taking the bus or even a moped.

Is hydrogen an alternative to fossil fuels? Germany, as it weans itself off coal, invested in 20 new labs to find out.

Meanwhile, China is ramping up its coal use, approving a plethora of new coal mines to fuel its energy needs in the short-term, not least for the Belt and Road initiative.

Indonesia, the top palm-oil producing country, is working on a new regulation to help smallholders certify those red oil-bearing fruits as sustainable.

Following a government agency routinely releasing its findings on the rise of deforestation in the Amazon, Brazilian president Jair Bolsonaro fired the agency’s leader.

India is pushing forward on a USD 4 billion hydropower project to build the country’s highest dam yet, despite backlash about its potential impacts on the people, forests and wildlife nearby.

RESEARCH: Give it a rust

A quarter of all people are living in countries with extreme water stress, concentrated in the Middle East and North Africa, found the World Resources Institute.

Can a sign of decay also be a future source of energy? Rust has scientists looking into this poetic question. Let’s hope it is, given that climate change could see global energy needs rise 25 percent in the next three decades.

Perhaps you’ve been noticing that climate art is becoming a thing – so much so that researchers ran a study on how it can be create to the greatest effect (answer: make people smile and show solutions).

On that note, a mission into outer space to collect data on climate change’s effect on Africa will be equipped with African art.

In the meantime, be your own eco-Picasso with the award-winning Infographic Energy Transition Coloring Book, which is currently running a Kickstarter to fund its second edition.