Get Daily Email
Join/Login CLOSE
Home / Featured Content / Agricultural Intensification Has Fed the World, but Are We Healthier? 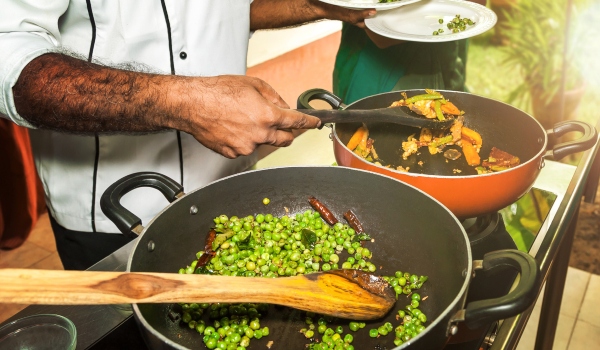 Grow more food on less land? Agricultural intensification has intuitive appeal. The Earth has a growing human population to feed, and few new places to cultivate crops without further threatening its dwindling biodiversity.

But there’s a big difference between getting enough calories and eating a nourishing diet. There are lots of micronutrients we need to consume to stay healthy, and one of the best ways to access them is to eat a wide range of foods – what nutritionists call ‘dietary diversity.’

The ‘Green Revolution’ of the 1960s delivered breakthroughs in technology that paved the way for an incredibly productive monocropping system. Improved varieties of wheat, rice and maize – using inorganic fertilizers, pesticides, machinery and irrigation became the cultivation norm. Farmers could now produce cereal crops that fed billions of people.

The impact is undeniable: between 1960 and 2000, developing countries’ crop yields more than doubled, leading to a jump in their economic growth and less world hunger.

And in the rush to feed the world, dietary diversity began disappearing, and fast.

Agricultural intensification has been lauded widely as a key step on the ladder towards an urbanized, post-agrarian economy, and a crucial element to attaining food security. It’s a powerful narrative, beguiling in its simplicity and supported by many researchers, policy-makers and donors. It’s so pervasive, says Center for International Forestry Research (CIFOR) senior scientist Amy Ickowitz, that “very few people [in these circles] have stopped to say ‘wait a second: what do we lose when we intensify?’”

In a new article in Global Food Security, Ickowitz and her co-authors identify and explore one issue that intensification has been unable to solve: dietary quality. Unlike the incredible acceleration of calorie production, the nutritional quality of our diets hasn’t kept the same pace. And in many cases, has deteriorated. Globally two billion people now suffer from micronutrient deficiencies, two billion adults are overweight or obese – in contrast to the 800 million people that go hungry.

Intensification is not solely or mainly to blame for these issues, Ickowitz says, but in some cases it can play a role. In West Kalimantan, Indonesia, Ickowitz’s research team observed how farmers who have switched to oil palm cultivation are losing green leafy vegetables from their diets. In contrast, those who have maintained traditional swidden polycultural farming systems haven’t, as they still either cultivate or collect these foods.

“We’re not sure yet if the markets are not providing these, or if they’re just choosing not to buy them,” says Ickowitz, “but that’s one change that does have important implications for people’s health, because they’re very important sources of vitamin A, iron, and fiber.”

“The best scenario is for developing countries to jump ahead- and not mirror Western diets.”

The environmental costs of intensification have received increasing attention over the last decade. The negative impacts of pesticides, fertilizers, and the huge amounts of water needed for irrigation, are well advertised. This has led to calls for ‘sustainable intensification’. While this is definitely a positive step, it does not address the issue that Ickowitz and her colleagues are trying to bring into focus. “Even if you intensify sustainably from an ecological sense,” she says, “if you are clearing a ‘messy’ field of beans, green leafy vegetables, orange colored vegetables, corn, and melon to replace it with nice neat rows of maize or rice grown sustainably, this can still have bad dietary consequences.”

So, what’s a better way to feed the world? There’s no neat-and-tidy answer, ponders Ickowitz – at least not yet. Intensification may well still be the most appropriate solution for some landscapes and populations: just not all of them, everywhere. “What we’re arguing for,” she says, “is a more context-specific look at what would work and what wouldn’t in different landscapes, before charging ahead with ‘one-size fits all’ policies.”

There’s certainly mounting evidence that more diverse landscapes that incorporate a range of crops, biodiversity and wild lands, alongside infrastructure to support market access, seems most likely to serve both household food security and environmental sustainability.

As such, the authors call for a reorientation of investment and research towards these more complex systems, beyond the current narrow focus on producing staple crops intensively.

Ironically, as the dietary, ecological and social impacts of the current global food system become increasingly apparent, many consumers in Western countries have already begun to favor more diverse, seasonal food from local, smaller-scale outfits – much like those in ‘less-developed’ countries where agricultural intensification has not yet taken hold.

“So we’re really advocating that tropical countries don’t repeat all of the mistakes and health costs that rich countries are now experiencing,” says Ickowitz. At present, the increase of cardiovascular disease and diabetes is “very, very steep in many tropical countries, including Indonesia,” she says. “The best scenario is for developing countries to jump ahead- and not mirror Western diets.”

This post was previously published on forestsnews.cifor.org and is republished here under a Creative Commons license CC BY-ND 4.0.