Get Daily Email
Join/Login CLOSE
Home / Featured Content / An Open Letter to Pixar: Diversity and Inclusion in Animation Affirms Us All 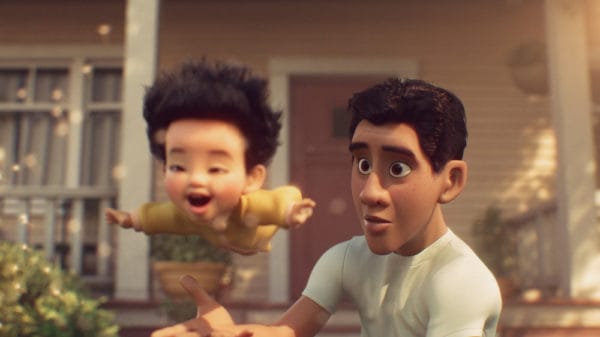 When I heard your parent company, Walt Disney Studios, was set to launch a streaming service called Disney+, I had no idea the plus sign would stand for inclusion.

I’d missed the media coverage that explained how your new series of short animated films, SparkShorts, was designed to give women and people of color more leadership opportunities in animation. It wasn’t until the much-hyped Disney+ debuted on Nov. 12 and a SparkShorts film titled “Float” appeared among its new offerings, did I understand what all the fuss was about.

On the surface, “Float” tells the story of a father who tries to keep his infant son’s ability to fly hidden from society, a trait that makes the boy different from other children. The six-minute film, of course, is deeper than that. It presents a powerful metaphor for autism and a clarion call to embrace differences in a society that relentlessly urges conformity.

I was heartened to learn that “Float” is based on the real-life experience of the film’s creator Bobby Alcid Rubio, whose son is on the autism spectrum, and is the first Pixar film to feature Filipino Americans as lead characters.

As a black father raising a daughter who is autistic, I empathized with Rubio’s personal story and was mesmerized by the film’s clever symbolism, especially the recurring reference to the dandelion – viewed by some as a weed; others, as a beautiful plant. Dandelions stand out on any manicured lawn, the way that autistic children often stand out from their neurotypical peers. (My daughter, age 5, will always be a special kind of flower in my eyes.)

Float presents a powerful metaphor for autism and a clarion call to embrace differences in a society that relentlessly urges conformity.

I thought “Float” would go down as a singular achievement in your studio’s animation history. But shortly before Thanksgiving, my social media feeds filled with chatter about a second SparkShorts film titled “Loop” to be released Jan. 10. The film directed by Erica Milsom unfolds from this premise: “A non-verbal, autistic girl and a chatty boy are partnered on a canoeing trip. To complete their journey across an urban lake, they must both learn how the other experiences the world.”

Too often in popular culture children on the spectrum are depicted as young white boys even though autism affects children in countries across the world. And while it’s true that in the U.S. boys are four times more likely to be diagnosed than girls (1 in 37 versus 1 in 151, according to the Centers for Disease Control and Prevention), Milsom’s decision to broaden the visual representation of who is affected by autism is a breakthrough worthy of celebration.

I can’t wait to see if “Loop” delivers on the promise of its script, which hopefully was informed by autistic people of color. But in “Float” your studio has made visible what people often don’t see, the internal struggle that some parents experience as they learn to accept their children exactly as they are.

There’s a heartbreaking scene in “Float” where the father, in a moment of frustration, screams at his son, “Why can’t you just be normal?” Those six words are the film’s only dialogue, but they speak volumes. What parent of a special needs (or, as some prefer, “additional needs”) child hasn’t felt that way at some point of their journey toward acceptance? These are the types of emotions parents have but aren’t allowed to say out loud for fear of being judged.

Those feelings aren’t about your child, to be sure, they’re about your own frustrations at why everything feels harder than it needs to be. Like when your child, in my case, is sensitive to the taste and texture of foods and will drink only smoothies of milk and Naked Juice and will eat only specific kinds of crunchy snacks (quinoa chips, popcorn, Pringles) leaving you with a constant worry about her nutrition. Getting your child to eat shouldn’t be this complicated, but it is.

After the father’s outburst, shame covers his son’s face, as if to say, “Why can’t you just love me as I am?” The whole scene triggered #AllTheFeels. (I’m not crying, you’re crying.)

“Accepting my son for his autism diagnosis, I have to admit it took me years. I know the short lasted only six minutes, but it took me a while before I could accept my son for who he is,” Rubio said in a recent interview with CBR. “He sometimes would spin and I’d be like ‘Hey Alex, can you stop that? Can you stop spinning?’ And now I accept that that’s Alex. He spins because that’s what calms him down, but it took me a while before I was able to accept that.”

I remember when I shared my daughter’s autism diagnosis with my aunt Linda and she replied, “What is normal?” before sharing a story about an autistic boy she’d met. She concluded the recollection with a pearl of wisdom that has stayed with me: “Normal is whatever we say it is.”

The truth is that every child enters the world as an original. There is no one like them on the planet. Even identical twins aren’t identical in every way. None of us – neurotypical or not – are meant to blend in. Like dandelions, we all, in our own unique way, stand out.

During this season of gratitude, I want to say thank you, Pixar, for seeing us, the parents of special needs children.

Thank you for seeing our children and shifting the narrative about their experiences from the margins of the story to the center to help foster greater awareness, understanding and acceptance.

Thank you for encouraging diversity and inclusion behind the camera.

Thank you for helping to redefine what “normal” can look like in animation.

Here’s to a new norm of storytelling that affirms us all.

Johnathon Briggs is a public relations pro and superhero (a.k.a. Emarie's dad). He also blogs at FatherhoodAtForty.net, where he writes about the "4 Fs": fatherhood, food, fitness, and fashion. His blog writing was honored in 2016 with a Communicator Award of Distinction from the Academy of Interactive & Visual Arts. During his 11-year career in journalism, Johnathon worked for The Chicago Reporter, the Los Angeles Times, The Baltimore Sun, and the Chicago Tribune. Johnathon and his family live in the ‘burbs of Chicago.

END_OF_DOCUMENT_TOKEN_TO_BE_REPLACED

Facebook78Tweet10Pin2EmailShares90
wpDiscuz
Share this ArticleLike this article? Email it to a friend!
Email sent!