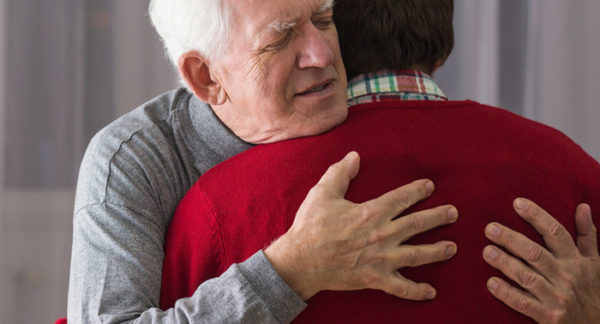 In a role dominated by women, some would think there’s no reason to bring men into the conversation. However, four out of 10 men according to Caregiving in the US 2015 survey are family caregivers. If that doesn’t sound convincing enough…try the math. Of the 40 million family caregivers, 16 million are men, the US alone. That’s a lot of men missing from a conversation that affects us all.

Make no mistake I see you. I see you in line at the pharmacy on the phone in a hushed voice discussing symptoms, outcomes and supplies required though you’re not sure why yet. I see you sit in darkened hospital rooms patiently waiting, rarely speaking. Which speaks volumes for those of us able to read between the lines. I see you diligently walking into a facility after the work day is done to visit someone who may no longer even know your name.

Do men care differently? In my experience, absolutely. Some traits that men possess work in their favor. Leading with logic and reason as opposed to emotions, can bring about a decisiveness when needed most. Health and aging issues come with times that hard choices must be made. Emotional processing must be done later. I’ve seen an easier transition from men when it’s time to employ help from professionals, an A plus B equals C type of reality that doesn’t give rise to as much guilt as it down their female counterparts.

Do men stumble differently? I believe so. During family conversations where care disagreements in plans of care may show up, their logic and reason are often misconstrued as indifference and bullying. Seeking support for the emotional toll that comes with caregiving in the form of support groups and counseling often show up last if at all. Adding to an already strained situation.

So how do we begin the conversation? By agreeing that family caregiving doesn’t choose one gender over the other to be kinder. Neither gender escapes the mental, financial, emotional upheaval that comes with caring for a loved one. For 20 plus years I’ve seen husbands, sons and fathers doing the same as women. Pouring all they have into the life of someone they love. I believe they not only belong in the conversation, they have something to teach us all.

Marie is a Certified Life Coach specializing in the needs of Family Caregivers. Merging her professional experience of over 20 yrs. as a Healthcare Navigator, Patient Advocate, & Caregiver for families nationwide with her personal journey in Care. Her hope is to shine a light & bridge the gap between the professional and the layperson.

Love it tell me more!

Facebook47Tweet6PinEmailShares53
wpDiscuz
2
0
Would love your thoughts, please comment.x
()
x
| Reply
Share this ArticleLike this article? Email it to a friend!
Email sent!