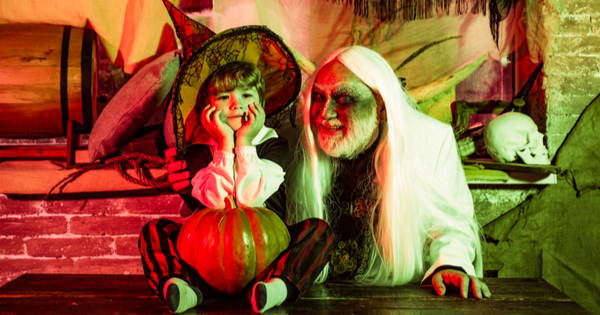 I stand behind the title of this piece, 100%.  Bad fathering is the reason for horror movies.  If there was a single good dad in any of these movies, then there would be no horror to be had at all.

Look at them.  Really look at them and tell me you disagree.  As I sit with my daughter watching scary movies in the run-up to Halloween, I can’t help but point out the mistakes these movie dads make because: c’mon, man!  The worst trope in all of these movies is the bad fathering.  It’s downright shameful.

No, you don’t want to buy the 200-year-old house on twenty acres of land that also contains a haunted prison graveyard.  Forget about the graveyard and the weird footprints on the ceiling, that’s probably just the kids.  But you know what else you are going to have to deal with?  200-year-old pipes because you know ghosts aren’t doing any upkeep.

They’re terrible at it because they’re lazy.  And those gutters haven’t been cleaned, which leads to wood rot.  That’s terrifying but not as soul shuddering as the condition of that roof.  20K minimum, right there.  A good father would point that out to the young couple thinking about buying this house and the movie would be over.  Wooden pipes do not age well, and neither does untreated foundation problems.

You know what I see when you fawn over that antique doll or toy?  Plastic sharp edges that carry black mold.  Every dad knows that you need to dip that thing in turpentine before it enters your house.  At the very least, it’s going to get rid of the bed bugs.  But trust me, turpentine can clean the devil out of every corner he may hide.  That and some Old Spice to really get the job done.

And now we need to turn to the bad fathering in any movie where there is a single weirdo masked killer roaming around.  We were watching Halloween II and my daughter was into it.  And like in every movie of this type, the bad guy gets hit with the car.  The girl jumps out, says “Oh, my!” and then runs away thinking that they are finally free.  That girl wasn’t raised right, not at all.

An early life lesson that we all teach is that you have to see a job done till the end.  There will be no cutting corners. You gotta chop him up and stack him up like cordwood next to the fireplace.  Use the old twine, not the good stuff that I got on sale down at ACE Hardware.  The old twine that came from the 200-year-old house that I wouldn’t let you buy.  And boom, there are no more sequels.

Look at every movie and you will see the trope played out again and again.

Exorcist?  WD-40 on the walls to treat the wallpaper from the stain, and a bit of Sprite to calm a nervous tummy of daddy’s little girl.

Silence of the Lambs?  Hannibal is talking fool nonsense and a proper father would teach his daughter to pay no mind to people like that.  Value comes from within, not from a man wearing a muzzle.

That’s what all these movies are missing.  A good father doing what he does every day of the week.  Do you think a good father is going to allow the zombie horde to destroy his yard without turning on the sprinklers?  Zombies hate sprinklers.  Bad fathering in every zombie movie, I tell ya.

And now let’s get to the big baddies; the classic monsters that started it all.

The wolfman had no one to show him how to shave.  Give me the wolfman for a week and I’ll have him with a high and tight haircut and a part-time job down at the lumber yard.

Frankenstein’s monster’s whole reason for terrorizing the countryside was because his father rejected him.  What kind of father is that?  A bad father, that’s who.  We love those we create no matter who they turn out to be.  A good hug at the beginning and that movie ends right after the opening credits.

Which brings us to Dracula, the king of the monsters?  He’s a complicated case with many layers, but a good father can see right through it.  He treats women like cattle and no good father is going to stand for that.  No sir, not on our watch.  You have to nip that in the bud early.

But a good father knows that it goes deeper than that because people are complicated, unlike 200-year-old houses with foundation issues.  No, the real issue with Dracula is that he hates himself and doesn’t know how to express it.  If there was a good father in his life early on, Dracula would be an accountant who enjoyed his weekends with his little ghoul kids, which a good grandfather would also love and help shape.

The oldest trope in horror movies is the bad father.  So don’t be one.  Raise a gremlin that doesn’t snack after midnight and if they are going to gnaw on a plane engine, make sure that it’s organic and on the ground.

Facebook19TweetPin1EmailShares20
wpDiscuz
0
0
Would love your thoughts, please comment.x
()
x
| Reply
Share this ArticleLike this article? Email it to a friend!
Email sent!