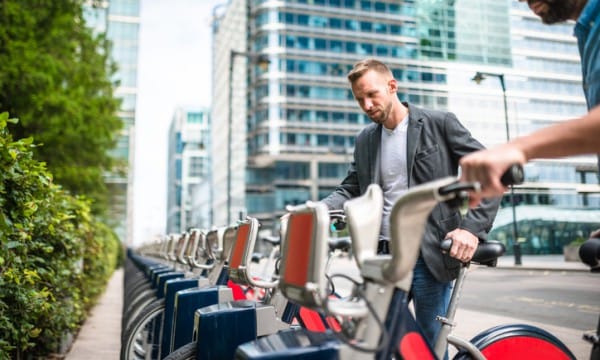 Google has extended its plan to incorporate the location and availability of shared bicycle docks (if there are bicycles and if there is space to return them) into Google Maps it first unveiled in New York in April 2018, to include 23 new cities around the world, with more to be added soon. Google’s decision follows that of Apple Maps and specific mobility apps such as CityMapper, which even includes the location of dockless bikes.

In other words, the computer we now all carry in our pockets allows us to quickly locate the availability of a bicycle, greatly facilitating this mode of transport. However, my concern is that the main obstacle to using bicycles is not their availability, but something more clear and evident: fear. For most of us, getting on a bicycle and pedaling to our destination, assuming we’re neither too old or infirm, is not an issue. What scares us is to be forced, in a vehicle that offers no protection, to do so surrounded by cars, sharing the road with vehicles weighing a ton or more and driven aggressively, failing to take into account the presence of personal mobility vehicles such as bicycles or scooters.

Bicycles are not the problem in our cities: cars are, and specifically, their hyperabundance and assumed rights. To improve mobility in cities we need to address the problem posed by cars, and to solve it, we have to start by turning those cars into a much less attractive transportation solution. The way to do that may involve imposing restrictions on their movement in certain areas, as a growing number of cities are now doing; congestion charges or tolls; but above all, the elimination of assumed rights, and fundamentally, parking.

What leads some people to think that the streets are the right place to park their cars? Street parking is appropriation for private use of a public space. Many city authorities take advantage of this to raise finance, but that does not change the fundamental fact that we are using a public space for a group of people, whether they pay or not, to use as their private garage. On-street parking deprives us of a strategic space for the development of alternatives and in addition clogs the streets of our cities as motorists drive round looking for a space. In the cities of the future, street parking is doomed.

The fundamental measure to get cities to become attractive places for personal mobility options such as bicycles or scooters is the creation of special lanes where people can move without risking their lives. And the only reasonable way to enable these spaces is by removing parking spaces on our streets. We have to stop seeing the street as a space to leave a car for hours. It’s that simple.

All the myths about bike lanes have been proven false. They do not harm local shopkeepers, they’re not underutilized, nor are they excessively expensive if we compare the investment necessary to include other transportation alternatives. Do they slow traffic down? Yes, and that’s a good thing, because it dissuades motorists from using their vehicles in our cities: this is how to treat the actor responsible for the pollution and congestion in our cities.

Seville, now an international example, proves that if you replace street parking with safe cycle lanes, people will use them. If you build them, they’ll come. Seville eliminated more than five thousand parking spaces to build its network of bike lanes, and is now a safer, healthier and less congested city. Excuses such as cities with extreme weather or hilly do not stand up to scrutiny: bicycles are widely used in such cities: there are technological solutions to such issues, and of course, bicycles are not mandatory, and are instead just one of a number of transportation options. Oh, my god, you don’t think about grannies or people with reduced mobility!! Don’t be silly: they will never be forced to use a bicycle, that doesn’t make any sense!! Improving conditions for bicycle users does not mean totally forbidding cars, or the like. That’s what I call a stupid argument.

To implement new urban transportation solutions requires political will. We have to stop building cities around cars: it’s not a sustainable model: they have to be built for people. Street parking is a relic of the past and an assumed right that must be eliminated. These are public spaces that have been appropriated for private use and that are ruining our cities and that could be used for bike lanes to loading and unloading areas for shops. The sooner we start, the sooner we will realize that, in the cities of the future, parking on the street is absurd, unthinkable, and a thing of the past. The sooner the better.