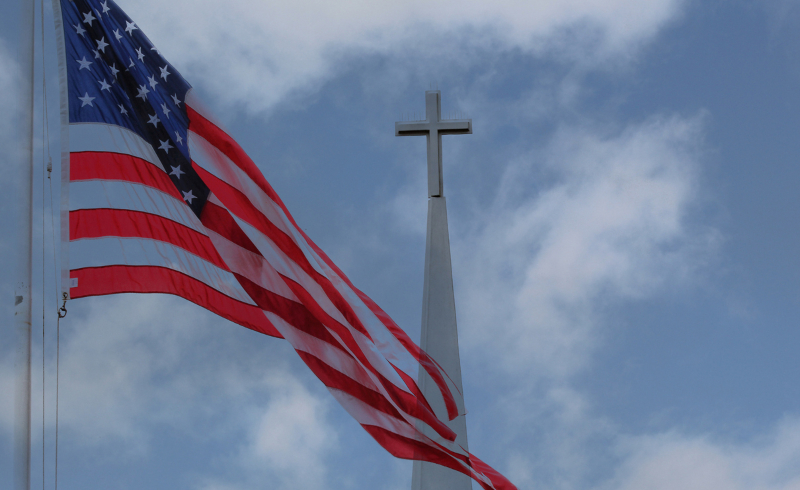 President Donald J. Trump officially proclaimed Sunday, September 3, 2017 (traditionally the sabbath for most Christian denominations) as a National Day of Prayer to commemorate the devastation to life and property caused by Hurricane Harvey. The day before, while visiting with sufferers of the storm’s wrath, Trump said that “Tomorrow’s a very big day, so go to your church and pray and enjoy the day.”

Whatever happened to the alleged wall separating religion and government? While the courts have attempted to reinforce this partition, our presidents have continually attempted to tear it down.

Though Donald’s order created an ad hoc National Day of Prayer, in April 2010, Judge Barbara Crabb of the U.S. District Court in Wisconsin ruled that the annual National Day of Prayer is unconstitutional by violating the First Amendment’s establishment clause. In her ruling, Judge Crabb stated:

It goes beyond mere ‘acknowledgment’ of religion because,” she declared, “its sole purpose is to encourage all citizens to engage in prayer, an inherently religious exercise that serves no secular function in this context.

She added that no law prevents people in the United States from praying or from creating non-governmental days of prayer, concluding:

I understand,” she continued, “that many may disagree with that conclusion and some may even view it as a criticism of prayer or those who pray. That is unfortunate. A determination that the government may not endorse a religious message is not a determination that the message itself is harmful, unimportant or undeserving of dissemination.

Congress established The National Day of Prayer during the Cold War in 1952 (and added “under God” to the Pledge of Allegiance in 1954, “In God We Trust” to U.S. coins during the Civil War, and to paper money in 1956).

In 1988, Congress set the annual National Day of Prayer as the first Thursday in May. President Obama, under whose presidency the court declared it unconstitutional chose to ignore the ruling by issuing a proclamation beginning:

Throughout our Nation’s history, Americans have come together in moments of great challenge and uncertainty to humble themselves in prayer.

George W. Bush and other elected leaders have invoked their Christian faith as the foundation of their political ideology. While governor of Texas, Bush officially declared June 10, 2000 as “Jesus Day,” and he advised all Texans “to follow Christ’s example by performing good works in their communities and neighborhoods.”

Six religious clergy offered prayers and Biblical readings January 20, 2017 atop the balcony of the U.S. Capitol interspersed by Donald Trump and Mike Pence placing their left hands on a stack of Bibles during their swearing-in ceremonies. And ending the festivities, sounds emanated from the Mormon Tabernacle Choir.

As I watched the proceedings on TV, I questioned whether I was viewing a presidential swearing-in or, rather, attending an evangelical tent revival as clergy invoked the name of Jesus at least eight times. Trump brought up “God” four times during his speech:

…The Bible tells us, ‘how good and pleasant it is when God’s people live together in unity’…,” said Trump. “We will be protected by the great men and women of our military and law enforcement and, most importantly, we are protected by God…And, Yes, Together, We Will Make America Great Again. Thank you, God Bless You, And God Bless America.

Not wanting to exclude Muslins, he said in usual Trump fashion, “We will reinforce old alliances and form new ones — and unite the civilized world against radical Islamic terrorism, which we will eradicate completely from the face of the Earth.”

President Barack Obama on Tuesday, January 9, 2013, tapped the Rev. Louie Giglio of Atlanta’s Passion City Church to deliver the benediction during his second inauguration overlooking the Mall of the U.S. Capitol Building later that month. Less than 48 hours later with the controversy surrounding Giglio’s past statements about homosexuality, however, Giglio decided to withdraw from giving the address stating:

It is likely that my participation, and the prayer I would offer, will be dwarfed by those seeking to make their agenda a focal point of the inauguration.

During his sermon, “In Search of a Standard – Christian Response to Homosexuality,” delivered a decade earlier, Giglio told his parishioners that being gay is a sinful “choice” and that gay people will be prevented from “entering the Kingdom of God.” The “only way out of a homosexual lifestyle … is through the healing power of Jesus,” he continued.

At his first inauguration, Barack Obama chose Evangelical Pastor Rick Warren to deliver the invocation. While Warren has been involved in some positive activities during his ministry, he has been a leading and outspoken opponent of lesbian, gay, bisexual, and transgender rights. He worked as one of the chief lobbyists for the passage of Proposition 8 in California delegitimizing marriage for same-sex couples.

In his public statements, he likened marriage for same-sex couples to incestuous marriage between a brother and sister and to polygamy. In November 2012, Warren went further by telling CNN’s Piers Morgan that being gay is a bit like eating arsenic or “punching a guy in the nose.” In addition, Warren has called into question the concept of separation of religion and government, and he said that Obama has “intentionally infringed upon religious liberties” with his contraception mandates.

Obama’s choice of Giglio and Warren, even if they had not been divisive figures, by giving blatantly sectarian addresses at presidential inaugurals raises several critical issues.

If the U.S. truly stands as a country dedicated to the concept of the separation of religion and government, as articulated by the First Amendment, why then do presidential inaugurals include “invocations” (supplications or prayers to God), and “benedictions” (a short prayer asking for divine assistance, blessings, and guidance given usually at the close of religious services)? In fact, Warren invoked the name of Jesus during his invocation, and closed by reciting the Lord’s Prayer.

And I will go even further: Why indeed does the government require the practice at presidential and other “swearing in” ceremonies of the placement of hands upon the Bibles (composed of the Jewish Bible and the Christian Testaments) and a swearing to the name of “almighty God.”

Furthermore, why do we hire chaplains to deliver prayers at the daily openings of Congressional sessions, all paid for by public tax dollars?

Many people who are asked to place their left hand on religious texts while raising their right hand to “tell the truth, the whole truth, so help me God,” are in this very act, committing perjury when they do not either believe in a god or do not believe, understand, or follow the very books over which they are pledging.

Before and during his presidency, Bush Jr. and other conservative Christian politicians consistently have called for voucher systems whereby students could choose to attend private parochial schools at public expense and supported prayer in the public schools as well as at school sporting and other events. Some religious, governmental, and educational leaders also push for the teaching of Creationism (reframed as “Intelligent Design”) to explain the genesis of the world and all its inhabitants.

Since first erected, that Jeffersonian wall has suffered from increased battering and now barely stands as a worn and tattered ruin. Candidates and elected officials don their Christian credentials like armor to repel potential attacks on their motivations and character.

Many of our framers, the chief architects of the United States Constitution, most clearly did not have these measures in mind. James Madison, familiarly called the “Father of the Constitution,” was most responsible for the First Amendment along with Thomas Jefferson.

Virginia was one of the first states following the Revolutionary War to address the issue of religion and government when Thomas Jefferson, who held deist beliefs, drafted “An Act for the Establishment of Religious Freedom” in 1777. Jefferson’s proposal passed into law in 1786 in Virginia.

Then, constitutional framers such as Jefferson and Madison negotiated a compromise with Protestant sectarians, which led to the clause written into the First Amendment of the United States Constitution:

Congress shall make no law respecting an establishment of religion, or prohibiting the free exercise thereof….

Though nowhere in the U.S. Constitution does the phrase “separation of church and state” appear, it was originally drawn from a letter President Thomas Jefferson sent on January 1, 1802 to the Danbury (Connecticut) Baptists Association.

Jefferson held deep concerns over the possibility of erosion of First Amendment’s religious freedoms, as did Madison. In his “Letter to Edward Livingston,” July 10, 1822, Madison opined:

Every new and successful example, therefore, or a perfect separation between the ecclesiastical and civil matters, is of importance; and I have no doubt that every new example will succeed, as every past one has done, in showing that religion and Government will both exist in greater purity the less they are mixed together.

Madison argued against the appointment of chaplains to the two houses of Congress, writing in his “Detached Memoranda,” circa 1820:

The Constitution of the U.S. forbids everything like an establishment of a national religion. The law appointing Chaplains establishes a religious worship for the national representatives, to be performed by Ministers of religion, elected by a majority of them; and these are to be paid out of the national taxes….The establishment of the chaplainship to Congress is a palpable violation of equal rights, as well as of Constitutional principles….

Everyone in our country has the right to hold any, or no, religious beliefs as they consider appropriate to suit their lives. This is a basic constitutional right, and more importantly, a basic human right to which all are entitled. Many of the framers of the U.S. Constitution were aware of the dangers of entangling religion with governmental activities and public policy. In fact, though, how “separate” do religion and government now stand in the United States?

Rather than building a border wall between the U.S. and Mexico, we need, instead, to cement the wall between “ecclesiastical and civil matters…[so] that religion and Government will both exist in greater purity the less they are mixed together.”

Though I respect President-elect Joe Biden’s decision to practice his Catholic faith, which he holds dear, I hope he and Vice President-elect Kamala Harris set a new precedent by keeping religion out of their inaugural ceremonies as a measure to begin to repair the torn and tattered wall of separation between religion and government.