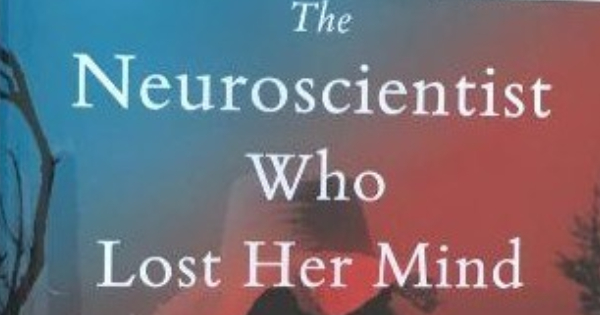 As I read The Neuroscientist Who Lost Her Mind by Barbara K. Lipska, I was looking forward to a medical memoir with the promise of something more. It is the story of a brain scientist who finds out she has multiple tumors that have spread to her brain from a previous melanoma diagnosis. She learns of the tumor as a result of an MRI after part of her field of vision disappears.

On one hand, the book is a pretty standard medical memoir. She becomes sick, needs and undergoes treatment and we are not sure if she will make it. There is actually a lot of suspense in just that narrative and this is the part of the book I like best, being a regular reader of these types of memoirs.

The book starts out during one of Lipska’s episodes when her brain is riddled with tumors, where she is not acting like herself. Later she will liken these episodes to “mental illness” or “madness”. She is running through the neighborhood after just dying her hair, the dye running down her neck.

Then it flashes back to explain more about her story and how she came to study the brain. She explains her first encounter with a real brain and what it was like to hold one in her hand and how she learned to slice one up for the lab’s experiments. She also talked about how her lab comes to get brains of individuals after they die. These brains are those of people who may have experienced schizophrenia as that is a main part of her studies.

Later when the multiple tumors in her own brain make her actions change, causing her to act irrationally, or become confused, she draws the conclusion that it is as if her brain is experiencing the mental illnesses she has studied. She also calls her state during the time when the tumors are causing her to act differently as madness.

Although she explained that some of the areas of her brain were the same as those that might be affected in someone with schizophrenia or another mental illness, I wondered about using the term mental illness or madness to describe her state. As someone who saw my own dad act like a different person, often irrationally and call me by my dead aunt’s name, after areas of his brain were destroyed by a hemorrhagic stroke, I wouldn’t have used these terms to describe my father.

I also wanted the book to have more of an emotional tone than it did. Perhaps because Lipska is a scientist, the book seemed a bit cold. I missed seeing how she felt about the brains she studied after experiencing something that they may have. If she did feel that what she was experiencing was something like madness, I wanted to know what she learned about the subjects she studied.

One quote in the book struck me. She sees,”We are all broken, that’s how the light gets in,” on the wall at Georgetown University. It speaks to her and she says to herself, “Through my broken brain, the light starts getting in.”

This book seems to be written quite soon after her experience, so some of the takeaways from the experience may still be coming. When the light gets in, it takes time for the insights to follow.

A version of this post was previously published on CatherinElanser and is republished here with permission from the author.