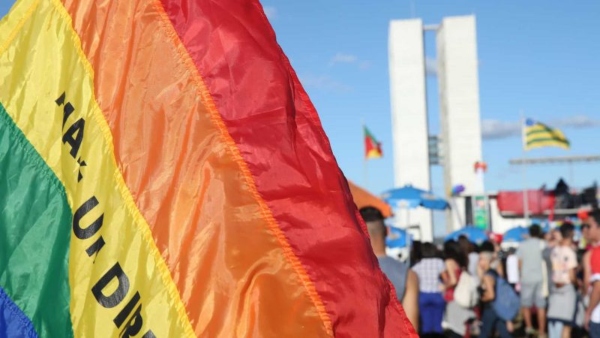 On June 13, Brazil’s top court ruled that homophobia and transphobia should be framed as crimes under Brazil’s existing racism legislation.

There are no laws in Brazil’s penal code that explicitly address prejudice or violence based on sexual orientation or gender identity. The court says the new ruling addressed a legislative omission that failed to protect Brazil’s LGBTQ+ population.

Those who commit acts of violence against LGBTQ+ peoples could be punished with prison sentences of one to five years. Those are the current penalties for discrimination based on ethnicity, skin color, race, religion, or nationality according to a penal code provision in place since 1989.

The 11-member Supreme Court voted 8-3 for the criminalization in response to a lawsuit moved by the Brazilian Association of Lesbian, Gay, Bisexual, Transvestite, Transgender, and Intersex (ABGLT, in Portuguese) and the Popular Socialist Party (PPS).

June 13, 2019: Brazil becomes the 43rd country in the world to criminalize homophobia and transphobia.

According to the STF decision, it becomes a crime to “practice, induce or incite discrimination or prejudice” because of the sexual orientation of the person. 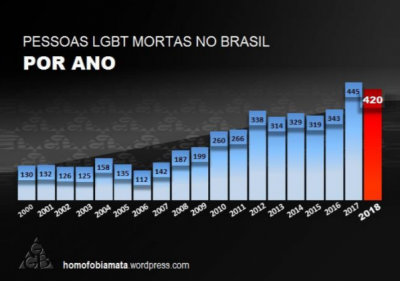 In addition to punishing acts of violence, the court’s decision makes it a crime to deny educational and professional opportunities, as well as access to public services and government buildings, based on sexual orientation. The promotion of discriminatory attitudes or events on social networks and other media could also be punished under Brazil’s racism law.

Brazil has one of the highest murder rates of LGBTQ+ people in the world, coming behind Mexico, the United States, and Colombia.

In 2018, 420 LGBTQ+ people were killed — one every 20 hours, according to the Bahia’s Gay Group, one of the oldest LGBTQ+ rights groups in Brazil. Of those, 72 percent were homicides, and 24 percent were suicides.

When stating her vote for criminalization, Justice Cármen Lúcia said that “all prejudice is violence, all discrimination is a cause of suffering.” She noted that discrimination often begins at home, separating families and friends, and added:

Justice Luiz Fux, another vote pro-criminalization, said that “symbolic violence is as alarming as physical violence” and that a law that identifies homophobic and transphobic behaviors as such can help to change the people’s culture. He says “there is a global concern about the epidemic levels of homophobic violence,” but legislators remain inert and oblivious.

Over the past 20 years, there have been several attempts to introduce legislation that criminalized homophobia in Brazil, but the religious and conservative culture kept them from advancing in Congress.

Fernanda Gonçalves, a criminal lawyer based in Rio de Janeiro, has told Global Voices that some legal experts say that the decision violates the so-called “principle of legal reserve,” which means that a criminal offense can’t exist without an existing law:

In Brazil, we have three independent powers — Legislative, Executive, and Judiciary. The characteristic role of the Legislative is to create laws and the one of the Judiciary is to judge. Framing homotransphobic acts in the law of racism via interpretation, in theory, extrapolates the function of the Judiciary, even if the intentions and the causes are noble.

She says there is a danger when the Supreme Court, composed of justices appointed by the president rather than elected by the people, creates a criminal law:

What if, in the future, a president eventually appoints justices who decide that the anti-terrorism law extends to acts practiced by activists and members of social movements? It opens a dangerous precedent.

A few activists and researchers have cited the mass incarceration of the country’s black and poor population as yet another issue to be considered in creating another penal provision. Brazil has the third-largest prison population in the world after the United States and China.

That opinion is shared by Iran Giusti, an activist and founder of Casa 1, a space in Sao Paulo that welcomes LGBTQ+ people who have been expelled from their homes. Speaking with Global Voices, Iran he says we must be cautious:

We need to consider our entire criminal and prison system. Who is punished in this country? Who is incarcerated in Brazil? All one need to do is look at the data to conclude that it’s black people.

It was also by a Supreme Court ruling, in 2013, that same-sex marriage was made legal in Brazil. The same decision grants gay couples the right to adopt children.

Victories and setbacks move in parallel 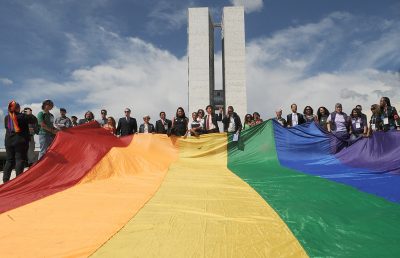 The ruling contrasts with Brazil’s current political landscape as president Jair Bolsonaro was elected in 2018 on an explicitly homophobic platform. In the past, he said that he would rather have a dead son than a gay son. Recently, he spoke out against gay tourism in Brazil.

We believe that punitivism should not be the way for regulation, but for now, since we live in a society tha only reorganizes itself with laws, it is an important decision. #lgbt #lgbtqia #transgender #translivesmatter #lgbtslivesmatter #pride

Earlier this year, Jean Wyllys, one of the first openly gay Brazilian legislators, gave up his seat at the Chamber of Deputies after receiving death threats. He says the threats were ignored by the federal police. Another gay man, representative David Miranda, took over Jean’s seat. In late May, when the Supreme Court’s deliberation on homophobia was resumed, David tweeted:

Tomorrow we will be following this important vote in the Supreme Court. We cannot close our eyes to so many of us who are abused and die daily. #LGBTphobiaKills #ItsACrime #CriminaliseItSTF

In early May, David proposed a new bill that aims to curb violence against LGBTQ+ people. On a Facebook post, he explained:

If approved, this bill could guarantee a series of protective measures that will save thousands of lives. It will be an important civilisational advance in times of obscurantism. One more step towards building a truly just and democratic society.