Get Daily Email
Join/Login CLOSE
Home / Featured Content / Breaking Expectations: Men who Set Examples That Don’t Depend on Cruelty, Misogyny, or the Diminution of Others 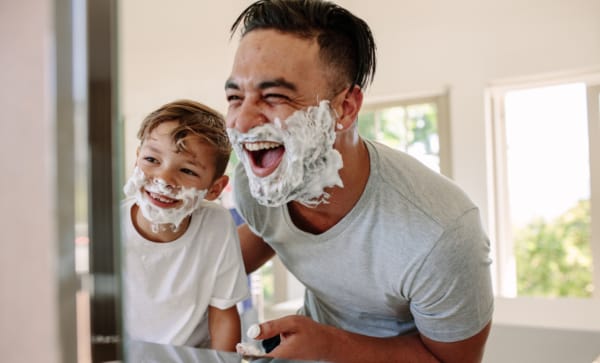 —
I finally got around to watching Gillette’s recent short film advertisement around the #MeToo movement and other issues of men behaving badly. What drew my attention was the call for a boycott of Gillette for releasing the advertisement. I wrongly assumed it was promoting more of the same kind of toxic male behavior and as a result was getting a call to boycott.

Imagine my chagrin when I watched the film to discover it was talking about the exact opposite of what has been dubbed “toxic masculinity.”

Since I write for the Good Men Project, I can utilize their definition of toxic masculinity, which is a gendered behavior resulting from expectations of what being a man is gone horribly wrong.

A narrow and repressive description of manhood, designating manhood as defined by violence, sex, status and aggression. It’s the cultural ideal of manliness, where strength is everything while emotions are a weakness; where sex and brutality are yardsticks by which men are measured, while supposedly “feminine” traits—which can range from emotional vulnerability to simply not being hypersexual—are the means by which your status as “man” can be taken away. Discussing toxic masculinity is not saying men are bad or evil, and the term is NOT an assertion that men are naturally violent.

In essence, men who exhibit toxic behaviors have defined any aspect of themselves that isn’t strong, dominant, or in control of others as non-masculine traits.

Surprised? Don’t be. It isn’t that hard to figure out how they arrive in this state. In point of fact, without support, it is almost a given that most men will engage and promote some degree of toxic behavior without realizing what it is they are doing.

In an ideal world, boys learn how to be men—if they are fortunate—from well-adjusted men who have become fathers who seek to raise well-adjusted sons. Sons who are capable of supporting themselves, working well in society, going to school, acquiring skills, getting a job, and eventually finding partners and becoming part of a family unit themselves.

This would be the ideal environment: good men raised by good parents and grandparents, each willing to make the critical efforts and interventions necessary to keep a young man growing and developing into a responsible, sensitive, socially and culturally intelligent individual.

Unfortunately, these days both parents are part of the workforce, and depending on where you live in this culture, your children may find themselves gaining more information about their changing bodies and the effects of puberty from each other and various forms of misinformation.

This misinformation can come from online forums promoting behaviors they “believe” are properly male (see: incels), to utilizing online pornography, which completely ignores any other aspect of male-female relationships while displaying acts of sexuality, promoting the worst possible view of women and their relationship to men.

Couple this with ill-informed guesswork, televised bravado, and good old-fashioned ignorance and you have a recipe for young men who are literally bursting with testosterone, their amygdalas aflame with barely-suppressed rage, and their nascent frontal cortices, which will stabilize around 25, lack self-control and self-discipline—a recipe for sexual and social misfire waiting to happen.

Amplify this with the herd mentality and social fears of exile and you have everything you need to create badly-behaved young men whose knowledge of themselves is through a lens most dark, their knowledge of women is fractional, at best, how to treat themselves or anyone else is barely socialized in any meaningful way.

Yes, school is a factor, but do you remember high school? A predatory battlefield where the strongest, most beautiful, most crafty, and most sinister individuals rise to the top of the social order.

No matter how you slice it, high school is rarely an environment promoting the best behavior you can present to the world, and ultimately it does not promote individual growth into decent adults unless there is a lot of coordination between teachers and parents.

This is how young men are developing today, without significant or meaningful guidance, drawing their models from television, murderous video games, or from manipulative online gurus like Jordan Peterson who promises a blessed “Man-topia”, filled with men who know their intrinsic worth, are capable of leadership and guidance, if only women could learn their proper place in society.

Watching Gillette’s video, the film directly opposed the common phrase: “Boys will be boys,” which in Toxic Man Land is the phrase used to excuse violence, abuse, misogyny, sexism, bullying and a host of other egregious sins that disrespect everyone exposed to them, and are treated as “The best a man can get [in this culture].”

The video shows men breaking those expectations, offering guidance and support to young men, expressing the views through their actions of kindness, direction, and cooperation. Most importantly, these men were setting examples that did not depend on cruelty, misogyny or the diminution of others to exalt oneself.

The hopeful faces of the young children watching these efforts at support and guidance were worth the price of admission; this video is taking the axiom “be the change you want to see” into a video challenging the societal norms that men need to be bullies, sexists, abusers, cruel, dominant and disrespectful in order to be men.

The part I am most disturbed by is the idea that there are some men who are protesting the message being sent.

As if being a man who is socially aware, culturally alert, strong but sensitive, refuses to abuse and able to respect women, open to new ideas, does not need to use their strength in an abusive manner and is aware of the needs of other people as well as his own is a problematic viewpoint; something which should be confronted and stamped out, a plague upon society, while the “toxic” standard is somehow a laudable position worth defending.

I am going to go ahead and assume if you are a person who would protest this advertisement and its very commendable message, you are a holdover from an age of uncivilized individuals who will probably not go quietly into that good night. But you will be going, none the less. Your toxic behavior is unwanted, undesirable, unfashionable and ultimately doomed for the scrapheap of history.

—
Additional references: Teaching Tolerance: What We Mean When We Say, “Toxic Masculinity” —As a consumer of news and a classroom teacher, how can I help my students make sense of the current news cycle? The term “toxic masculinity” can be useful vocabulary for these conversations.
—

Facebook142TweetPin1EmailShares143
wpDiscuz
0
0
Would love your thoughts, please comment.x
()
x
| Reply
Share this ArticleLike this article? Email it to a friend!
Email sent!