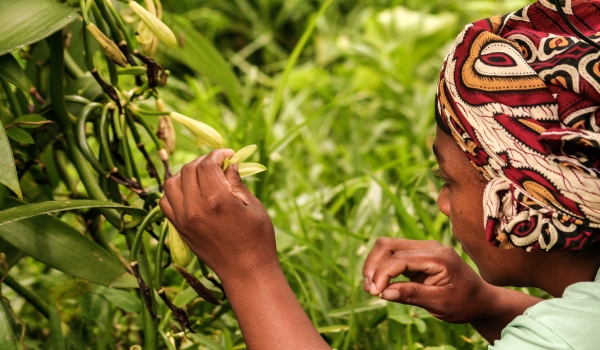 Cameroon – When Caleb Yengo Tata travelled to the remote Takamanda rainforest region in southwest Cameroon on a research trip with the Center for International Forestry Research (CIFOR), he was struck by the high levels of malnutrition and infant mortality that he found there. “We would visit a community one day, and the next day we would come back and another baby had died,” says the researcher at Cameroonian NGO and CIFOR partner Forests, Resources and People. “So I felt really drawn to do something about nutrition.”

People weren’t starving, says Tata. But the majority of women of reproductive age were suffering from some level of iron-deficiency anemia.

Anemia is a global public health issue, which affects women and children most severely, by increasing the risk of maternal mortality, low birth weight and infant mortality. It also affects children’s long-term health outcomes, so it can lead to intergenerational malnutrition and poverty.

While global hunger rates have dropped in recent years, rates of micronutrient deficiency remain stubbornly high. In many parts of the world, traditional diets and lifestyles are changing as environments are degraded and societies become more interconnected. What might that mean for people’s micronutrient consumption? That’s one of the questions behind a suite of research that CIFOR is carrying out into nutrition, forests and diets.

“We would visit a community one day, and the next day we would come back and another baby had died”

In 2016, Tata returned to Takamanda to narrow in on the diets and health status of reproductive-age women, and explore whether forest access influenced their anemia levels.

The terrain at Takamanda is rugged and very difficult to access, says Tata – but it’s an ideal site for researching this issue because there are a number of culturally similar villages in two different environments: grasslands and humid tropical rainforest.

The researchers found that while around 75 percent of women in both environments experienced some level of anemia, those in grassland communities had a higher prevalence of moderate to severe anemia than their forest-dwelling counterparts. Women in forest communities also consumed more vitamin A-rich fruits and vegetables; vitamin A helps with iron absorption and boosts immunity, among other properties.

What made the difference? Before carrying out the research, the team hypothesized that forest-based communities’ access to bushmeat might boost their iron levels, says CIFOR scientist Amy Ickowitz. But in the end, says Tata, it wasn’t meat that tipped the scales. Women in forest communities did eat more meat than their grassland counterparts, but this wasn’t shown to have a measurable impact, and perhaps was mitigated by the fact that those in the grasslands were closer to markets and could more easily buy products like fish.

“If these communities lost the forest, it’s possible that their nutritional status could become worse”

Rather, the difference in results seems to be down to a dark leafy vine called eru (Gnetum africanum), which grows abundantly in Cameroon’s rainforests and across central Africa. In Western parlance, the vine might well be termed a ‘superfood’: one study estimated its iron content as about 85 percent higher than that of fresh spinach. It also appears to have relatively low levels of anti-nutrients, which stop the body from absorbing nutrients like iron.

Eru is traditionally cooked with palm oil, crayfish and bird pepper [Capsicum annum], a hot chili that grows wild in the area. The women harvesting it didn’t know about its health properties, says Tata: “they just go to the forest and forage and then feed their families with what they find.”

While the evidence seems to suggest that consuming eru leads to lower rates of anemia, Ickowitz emphasizes that “we’re nowhere near close to proof of that.” The researchers did their best to control for non-diet factors that influence anemia levels – such as the presence of malaria, parasites or worms – but their data on that was limited, and relied on women’s self-reporting, “which we know is not a great indicator,” she says.

“So we think this is an exciting invitation for other researchers to do more biochemical work and to take our work from the forest into the laboratory,” says Ickowitz. “It definitely requires science from a different sector, to investigate those links further.”

“if the whole landscape changes to an industrial monocultural system, there’s not going to be eru available in those communities anymore”

However, the links made in the study still speak to the importance of conserving forests, says Tata. “I think it’s a huge pointer again of the huge role that forests can play in nutrition – not just for women but for children under five as well,” he says. “If these communities lost the forest, it’s possible that their nutritional status could become worse. It’s a source of very micronutrient-dense food.”

Many development interventions still fail to take these kinds of issues into account, says Ickowitz. Instead, they retain the assumption that agricultural intensification, leading to higher incomes and greater connection to the global economy, will serve people in poverty best. In the case of the Takamanda communities, “if the whole landscape changes to an industrial monocultural system, there’s not going to be eru available in those communities anymore,” she says. “So it could improve incomes, but might make diets worse. And it might make health worse, too.”