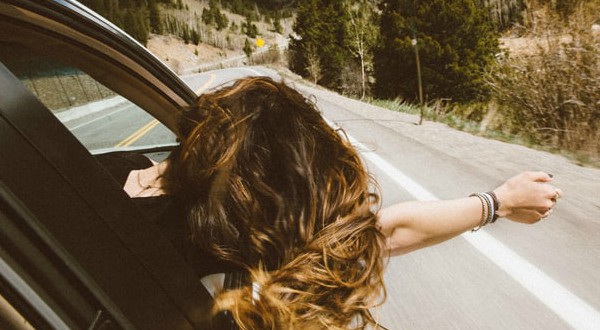 —
The book’s title was, “The Bad Girl’s Guide to the Open Road”. It was hot pink and pocket-sized, not unlike my grandmother herself. I was born into a matriarchy and She was the holy mother.

Of the 29 bloodline descendants born into my lineage from my great-grandmother on down, 25 are women.

My grandma took pride in that fact and I took pride in my contribution: five of those girls are mine.
My first year in college, two friends and I absconded from perpetually grayscale central Illinois to Panama City Beach for Spring Break — land of Senor Frogs and the MTV Beach House — with nothing but 90 minutes notice, a torn road map, my friend’s mom’s gas card, and $80 cash pooled between us.
Once our disappearance was discovered, our mother’s were a collective wreck. These were the days before cell phones, MapQuest, and GPS. Apparently, it was a real nail biter whether three 18-year-old women could survive a 5-day, 1000 mile trip, unchaperoned. But we sure did, bringing back crispy sunburns and wanderlust (and some borderline debaucherous memories) as souvenirs.

When she heard I was home from my trip, safe and sound, Grandma called me up on her rotary phone and invited me over.

Before the door was even open wide enough for gramma’s scent to hit my nose — a blend of Windex, fall blend potpourri, and Chanel #5 — she handed me a present with a sweet, pink bow.

She didn’t simply give it, though. She presented it…bestowed it. Mind you Amazon was not around back then so the effort that went into her gift’s procurement was not insignificant for an 80-year-old woman whose body was contorted with arthritis. She had to actually drive to the bookstore, park the car, traverse the parking lot, walk the aisles, and select the book herself.

The second I saw the title and the look on her face, it became my favorite thing.

Grandma ushered me in to have lunch and asked me to share with her the tales from our adventure, even though her daughter — my mother — was barely speaking to me for the offense of having gone in the first place.

She was hungry for the freedom and lightness of youth threaded through my impromptu narration that included everything from the three of us sleeping huddled and freezing on the beach to the bizarre coincidence of running into my high school boyfriend, who had gone to college two states away, to the deeply regrettable choice of my roommate getting a Ren & Stimpy tattoo on her ankle as she cried through beer tears. I spoke as unedited with her as I would sharing secrets with my best friend at 3 am. She was — at that moment — living through me. The wind was in her hair driving down the highway, with one friend sitting on her right singing at the top of her lungs while the other slept on her left…head on my grandma’s shoulder. She felt freer and more loved than at any other moment in her life.

I remember how watching her reaction crystalized for me the story of her youth that I had heard so many times before, but which had never really hit home.

I had never seen her eyes look weightless.

At 18, my grandma was 6 months married and had turned down a college scholarship, a rare opportunity for a young woman in the 1940’s, in order to stand on a dock and wave as my grandfather shipped off to the Korean War. Her belly was just barely swollen with the promise of my mom and the days to follow were filled with infants and factory work, up and through her 21st birthday.

She spent the next 50 years being the creator, caretaker, peacekeeper, laborer, defender, and leader of her tribe of little women.

She soldiered on long after my grandpa left her a young widow and had a beautiful, meaningful, and noble life — but she wanted more for her daughters and her daughters’ daughters.

Listening to me at that table, my grandma saw my freedom as both an adventure to relish and as a reflection of herself…evidence of a job well done. She had been able to hand down an opportunity to me that she had never been able to access. As a daughter of German immigrants and a first generation American, she felt the weight of her responsibility.

Her commitment and sacrifice for her family allowed me to have the experiences she never had — and she never once expressed regret for her choices. She was too happy for mine.

Telling my grandma the story of my last-minute, competence-building, adventure-seeking, mildly scandalous — but not-at-all-regrettable — road trip and watching her eyes shine with excitement is one of my favorite memories of her. I thanked her so many times over the following 10 years for that book … and I got to thank her one last time as I held her hand as she died at the end of those 10. She was determined — her life’s work, really — was to draw her descendants a different map than she had. And by God, she did. I found my map in that book — the little pocket-sized, hot pink one.

From “Bad Girls Guide to the Open Road”, Chapter 4: “Where to Go”

“Girl — Go anywhere that sounds like fun. Set out to visit Niagara Falls or the Golden Gate Bridge. Head in the general direction of the Liberace Museum or Lizzie Borden’s house. Aim for the Mermaid Parade on Coney Island or the Ostrich Races in Chandler, Arizona. But you don’t have to have a destination or even a plan in mind. You can just hit the open road, put the pedal to the metal, and see where you end up.”

“Mother Road…. is always there for you.”

I wrote this piece for recitation as a live storytelling event which I reference in this story:

Short version: I am tragically afraid of public speaking and I thought if I wrote about her, a little of my grandma’s fearlessness might rub off on me.

—
This post was previously published on www.medium.com and is republished here with permission from the author.
—
Photo credit: unsplash.com