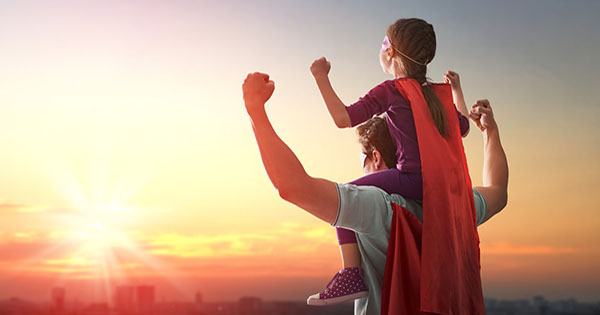 —
If you’re like me, when another Father’s Day looms, you start reflecting on your performance as a dad. It’s only natural to be introspective, even if you think the observance is just another frivolous minor holiday.

As men, we can often be hard on ourselves. We are socialized to be competitive, measuring ourselves against the accomplishments of other men. The pressure we put on our own shoulders can be crushing. The combination of internal and societal expectations drives many of us into depression and unhealthy behaviors.

It’s time to show yourself a bit of self-care, which includes giving yourself a break from the negative mind chatter that berates you. You may be wondering, “Anthony, what should I celebrate about my track record as a dad?” I’m glad you asked!

Here are some things we can savor as modern and enlightened fathers:

We’ve Soared Over the Low Bar

Many of us had less-than-ideal father figures. My own was emotionally and sometimes physically abusive. If you’re like me, you swore long ago to be a better dad than your father. You’ve transcended the bog-standard, default accolade of providing for your children’s physical needs of shelter, food, and modern conveniences. While those things are vital, you have chosen to also feed the souls of your offspring.

Simply by virtue of not abusing your children, you are doing a great service for them as well as the world at large. Adverse Childhood Experiences (ACEs) are strongly correlated with mental and physical ailments that can negatively impact families and communities, economically and socially.

Yes, avoiding abusive behaviors can seem like a “passive accomplishment,” and a low bar to hurdle. But I encourage you to see this as a win, because you’ve spared your kids some major struggles later in life. Instead of copious therapy and years of playing emotional catch-up, you’ve given them an elevated platform from which to soar.

You might be saying, “Just because the bar was set so low by my own father doesn’t mean I should rest on those dubious laurels.” Yes, I completely agree with you. That’s why I encourage you to also remember how we’ve raised the bar. Us modern dads have taken active roles in encouraging not just our children’s dreams, but also the development of practical internal resources to achieve those dreams.

Much virtual ink has been spilled on the failure of the so-called “self-esteem movement.” I don’t believe we should do what my father did to me and teach children the world is a nightmare experiment in Social Darwinism. However, we shouldn’t swing in the completely opposite direction and convince kids they are destined only for success simply by virtue of their inherent “specialness.”

It turns out, parents in the 80’s and 90’s should have been focused on self-efficacy. Teaching kids about the realities of a sometimes difficult and ever-changing world, and encouraging them to develop a solution-based growth mindset, is a much more concrete and sustainable source of self-worth.

Proponents of the self-esteem movement meant well, but put the proverbial cart before the horse. A healthy sense of self doesn’t come from some latent gift of specialness; it comes from developing the skills and talents we need to actively pursue our passions.

Today, we aren’t teaching kids they can be or do anything they want, but rather that they can try anything they want. If they find out they don’t like that thing, or they fail at it, we’ve also taught them to embrace outcomes, learn from the experience, and move on to find a better outlet for their interests. These lessons are an integral part of the study of resilience in the field of Positive Psychology.

Sing Your Own Praises for Once

So, on every Father’s Day going forward, I challenge you: while you’re enjoying some extra TLC from the family and getting a day off from your usual chores, I suggest you truly go deep and celebrate yourself. Take the opportunity to rest not only your body, but your mind and—dare I say—your soul. Savor what you’re doing right as a dad. Keep up the good work, even though you’re not perfect.

Facebook49Tweet4Pin1EmailShares54
wpDiscuz
Share this ArticleLike this article? Email it to a friend!
Email sent!