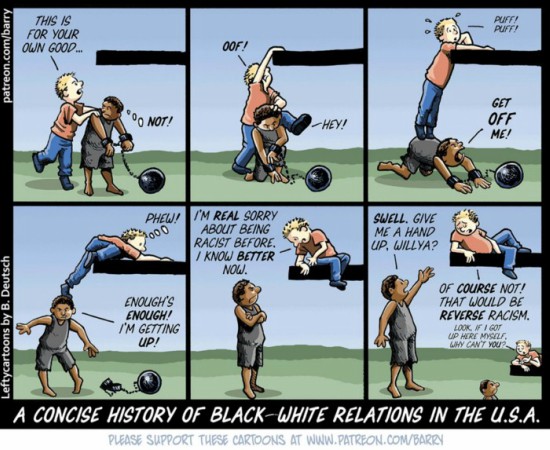 But what about us? It’s a question of which white folks never seem to tire when discussing subjects like affirmative action, or other diversity initiatives intended to expand opportunity and access for people of color in higher education and the job market.

Whenever these matters are raised, the vast majority of us rush to protest: How dare schools or employers consider race in admissions or hiring. They should be colorblind, we insist, merely admitting or hiring the most qualified! And more to the point, we proclaim, targeting folks of color for opportunities means discrimination against us, making us the victims of horrific reverse racism.

And yes, blacks and Latinos combined only represent about 13 percent of students at the most selective colleges and universities — the only ones that actually practice any kind of real affirmative action for admissions — and there are twice as many whites admitted to elite schools with less-than-average qualifications as there are people of color so admitted, but still, can any rational person doubt that whites will soon be limited to mere token representation at the nation’s best educational institutions?

That such hand-wringing about so-called reverse discrimination reeks of intellectual mendacity should be obvious by now. Despite years of so-called reverse racism, whites remain atop every indicator of social and economic well-being when compared to the African Americans and Latinx folks who, it is claimed, are displacing us from our perch. Whether looking at employment data, income, or net worth, we are the ones in better shape without exception.

Indeed, in some regards the gaps between whites and folks of color have grown in recent years, as with wealth gaps, which have actually tripled since the 1980s, now leaving the typical white family with over 20 times the net worth of the typical black family and 18 times that of the typical Latinx family. Even when comparing families of middle-class income and occupational status, whites possess 3–5 times the net worth of middle class blacks, suggesting that even African Americans who have procured good careers and obtained college degrees lag well behind their white counterparts, due in large measure to the inherited disadvantages of past generations, affirmative action notwithstanding.

Ulitmately, claiming that affirmative action not only disproves white privilege, but indeed suggests its opposite — black and brown privilege — as many have argued to me via email exchanges, ignores the entire social context within which affirmative action occurs.

It’s like protesting that sick people are privileged, relative to the healthy, because there are no hospitals for the latter.

It’s like complaining that the poor are privileged relative to the well-off, because no one sets up soup kitchens to serve the affluent; nor does Habitat for Humanity ever show up to build mansions for the rich.

It’s like insisting that the disabled are privileged because they get bigger bathroom stalls, or because of all those special parking spaces, and that the able-bodied are oppressed because we have to walk a bit further when we go shopping at the mall or for groceries.

It’s like complaining that women are privileged and men oppressed because hospitals don’t have paternity wards.

It’s like whining about how the LGBT community is privileged and we straight and cisgendered folks oppressed, since, after all, “the gays” have their own parades and bars that cater to their needs. Where’s our parade? Where’s our bar?

It’s like inveighing against the privileges enjoyed by Jews or Muslims, what with that Kosher or Halal certification you can find on grocery items nowadays. Obviously, going out of the way to make sure observant Jews and Muslims know what food is OK for them to eat is nothing less than naked favoritism! After all, where’s the little Jesus cross to let Christians know what food is holy for them?

It’s like rich people, who make millions or even billions (and as such, likely pay a pretty hefty tax bill annually) complaining about how working class folks who earn only $15,000 or so not only don’t pay income taxes, they actually get a refund in the form of the Earned Income Tax Credit! As such, it’s obvious that the working poor are the truly advantaged in society! And this is especially true when you think about all the thrift shops and discount stores that are established to serve them, and those check-cashing outlets and pawn shops! An entire infrastructure just for low-income people. Where are our food stamps? Where’s our government cheese?

For that matter, one might ask where’s our National Association for the Advancement of White People? Because we don’t have to notice how there are several of these, implicitly, throughout the culture: the Fortune 500, the Chamber of Commerce, or your friendly neighborhood police force among the most obvious.

Or, where’s our White History Month? Which is the kind of imbecilic query that could only emanate from the lips of one who has had the luxury of glibly ignoring that we have several, though they go by the tricky names of May, June, July, and so on, and in which months white people’s historical narratives are given quite a bit more than a momentary consideration.

In other words, when whites critique affirmative action, we typically ignore everything that came before such efforts, which skewed the historical balance of power and access in our favor, and even that which continues to favor us now, from funding and other advantages in the schools that mostly serve our children, to preferential treatment in the housing market, to ongoing advantages in employment.

For instance, with black and Latino students far more likely than whites to attend concentrated poverty schools, and with the typical black or Latino student attending school with twice as many low income students as the typical white student, and being twice as likely to be taught by the least experienced teachers and half as likely to be taught by the most experienced, it is more than a bit disingenuous to suggest that it’s black and brown kids receiving “preferential treatment” in education.

With companies filling up to half of their new jobs by way of recommendations made by pre-existing employees — a practice that benefits those persons connected to others already in the pipeline, who will disproportionately be white — and with informal, typically white-dominated networks providing the keys to the best jobs in the modern economy, and with research indicating that employers are more likely to hire people they’d like to “hang out with,” than those who are necessarily the most qualified (which will tend to replicate race and class homogeneity), and with blacks significantly underrepresented in management positions, it stands as uniquely craven to complain about how persons of color are receiving unjust head starts in the labor market.

That even middle class blacks, relatively protected by their economic and educational status from overt mistreatment, still suffer disparate rates of job dismissal (even when their performance indicators are comparable to those of whites), lower mobility when compared to similar whites, and regular harassment on the job, makes such arguments all the more repugnant.

With people of color significantly more likely than whites to be steered to subprime mortgage loans — even when their credit scores and incomes are comparable to (or better) than their white counterparts — makes it downright indecent to argue that it’s whites who are getting the shaft and people of color who are reaping the benefits of some iniquitous system of preference.

And yet, that’s what one can hear, over and again, from the very white Americans who regularly bemoan what they call the “victim” mentality of black folks and other “racial minorities.”

As in, “If I were just black, I’d have gotten into Harvard!” conveniently ignoring that if you’d been black you’d have been black your entire life, not just on the day you applied to Harvard.

Which is to say that long before you sent in your college application, you’d have been a black child, born in a country where black children are twice as likely to die in infancy as the white child you actually were.

You’d have been a black teenager, in a country where black teens who are actively seeking jobs have unemployment rates that regularly hover around 40 percent, and are more than twice the rate for white teens, like the one you actually were.

And if you had committed a crime as a youth, you’d have been six times as likely to be incarcerated for that crime than your actual white self, even if the crime details and your prior record were no different than they had been in your actual, white world.

In short, claims of white victimhood only make sense if one has so imbibed a mentality of entitlement that one actually believes whites earned all that extra stuff, that we earned our better health, or the relative wealth status we merely inherited from our families (which inherited it from theirs), or preferential treatment from cops. Which is to say, it’s the kind of thing that can only make sense to those lacking the most basic capacity for critical thought, and anything remotely resembling that which we might call, perspective.

Such is the face of white privilege in the twenty-first century: a systematized reality so normalized and taken for granted by the majority of whites, that any deviation from its totalizing script becomes cause for alarm in the eyes of millions.

That such a weak, hypersensitive and over-indulged group as this should wield such power would be funny were it not so dangerous.

—
This post was previously published on www.medium.com and is republished here with permission from the author.
—
Photo credit: Tim Wise

Facebook361Tweet1PinEmail1Shares363
wpDiscuz
Share this ArticleLike this article? Email it to a friend!
Email sent!