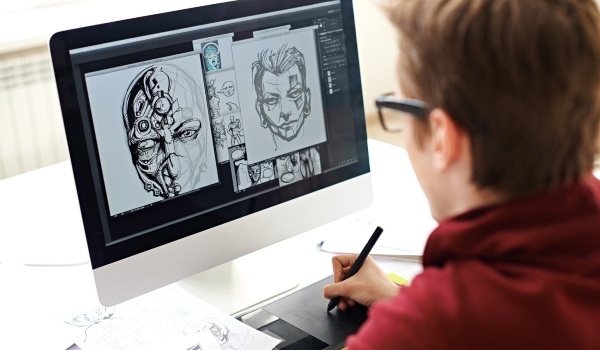 —
A new exhibition at the Library of Congress explores the fascinating evolution of visual storytelling styles in comic art – from panels in early newspapers to contemporary images of some of the most famous and funny characters in print. “Comic Art: 120 Years of Panels and Pages” opens Sept. 12 and will be on view for a year in the Graphic Arts Galleries of the Library’s Thomas Jefferson Building.

The exhibition draws from the Library’s extensive collection of comic art, which includes some of the earliest comics, including the first successful newspaper comic strip featuring Richard Outcault’s “The Yellow Kid,” early drawings of “Peanuts,” superheroes including Batman, Superman and the Incredible Hulk in modern comic books, and much more.

“The Yellow Kid,” first published in a panel in the New York World newspaper in 1895, is credited with sparking the rise of comics as a new American art form. By the middle of the 20th century, a growing number of diverse comic artists were examining their own life stories and commenting on culture and politics while expanding into graphic novels, fanzines and web comics. Comic art characters and narratives have also spread across film, television, books and marketing to reach even more people.

Highlights of the exhibition’s first rotation include:

“Comic Art” will feature 45 items in the first rotation and a second rotation in spring 2020. The exhibition is on view in the Graphic Arts Galleries of the Library’s Thomas Jefferson Building, 10 First St. S.E., Washington, D.C. The exhibition is free and open to the public Monday through Saturday, 8:30 a.m. to 4:30 p.m.

A conversation with comic artist Jaime Hernandez, co-creator of the alternative comic “Love and Rockets.” Hernandez was the winner of the 2014 Los Angeles Times Book Prize for best graphic novel/comic and the 2014 Will Eisner Comic Industry Award for Best Writer/Artist. He will be interviewed by Gary Groth, founder and president of Fantagraphics, about his work and creative process, representing Latinx experiences in comic art and changes in the field over the course of his career. A small display of materials from the Library’s collections will accompany this talk.

Friday, Sept. 13, at noon
Room 119, First Floor, Thomas Jefferson Building
Cartoonist Lynn Johnston, creator of the long-running syndicated comic strip “For Better or Worse,” will discuss her career and artistic process, while illustrating the presentation in real time. Tickets are available at johnston-lc.eventbrite.com.

“Comic Art” is part of a yearlong initiative inviting visitors to Explore America’s Changemakers through a series of exhibitions, events and programs.

The exhibition is made possible through the generous support of the Swann Foundation for Caricature and Cartoon and gifts in kind from the Small Press Expo.

About LIBRARY of CONGRESS

The Library of Congress is the largest library in the world, with millions of books, recordings, photographs, newspapers, maps and manuscripts in its collections. The Library is the main research arm of the U.S. Congress and the home of the U.S. Copyright Office.

The Library preserves and provides access to a rich, diverse and enduring source of knowledge to inform, inspire and engage you in your intellectual and creative endeavors. Whether you are new to the Library of Congress or an experienced researcher, we have a world-class staff ready to assist you online and in person.

I encourage you to visit the Library of Congress in person in Washington, D.C., explore the Library online from wherever you are and connect with us on social media.