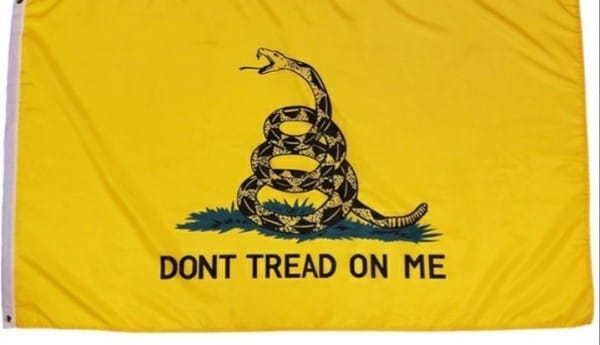 A mostly manufactured controversy has arisen when the actor Chris Pratt was criticized for wearing a “Don’t Tread On Me” Flag shirt. The flag is used by multiple patriotic organizations and sports teams but has also been adopted by various far-right political groups and gun rights organization.

“Nice shirt… Only people I see with that flag are alt-right racists,”

Fox News went crazy and is using this opportunity to attack, “the left,” and “liberals,” for daring to criticize patriotism and the US flag. That flag, also known as the Gadsden flag after the General that designed it during the Revolutionary War; was never an official US Flag but did represent a time when all men were not deemed created equal. Below is a look at all the official US flags in history and some of the things that occurred while each flag flew. The flag can be a patriotic symbol, it is also fair to condemn the abuses which have taken place in its name.

Slaveowner Francis Scott Key writes The Star-Spangled Banner. He believed blacks to be “a distinct and inferior race” and “the greatest evil that afflicts a community.” The third verse celebrates the death of slaves.

The House of Representatives agrees to the Talmadge Agreement barring slaves from Missouri, this led to the Missouri Compromise admitting them.

The Missouri Compromise allowed Missouri to enter the Union as a Slave state.

At Monticello, VA. 130 former slaves and other possessions of Thomas Jefferson were sold at auction.

In Cincinnati, OH, rioters attack blacks and white abolitionists for fear blacks would take their jobs.

Texas enters the Union as a slave state

The State of Missouri prohibits freed slaves from receiving an education.

Under this flag, the Supreme Court overturned the Missouri Compromise and opened up slavery to all the territories.

The Supreme Court in the Dred Scott Case ruled a black man had no rights.

Confederate General Nathan Bedford Forrest orders the massacre of mostly Negro Union troops attempting to surrender, (Hands Up). A 25-foot statue, visible from Interstate-65, exists today on private property in Nashville, TN. He was an early member of the Ku Klux Klan and was honored in 2019 by the Tennessee Governor.

The “black codes” are passed in all Southern legislatures in the former Confederate States. Slavery by another name.

Reconstruction ends when the Federal Government withdraws all Federal troops from the South under a compromise over the Presidential election. It Made Southern Legislatures White Again.

Jim Crow becomes the law of the land in the South

Eight blacks were killed by whites in Wilmington, NC

Three days before his trial, Mack Charles Parker is beaten to death in his jail cell for allegedly raping a white woman.

Facebook129TweetPinEmailShares129
wpDiscuz
Share this ArticleLike this article? Email it to a friend!
Email sent!